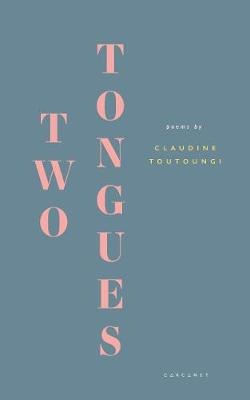 The moment you reach the sharp edge of an escarpment and are clobbered by a sudden gust that momentarily takes your breath away is unexpected and exhilarating; you cannot speak for the scintillating shock. Words are briefly lost to the wind.

Claudine Toutoungi’s poems are a blistering hail of words, a ravening, gathering storm of sound and meaning that insinuate themselves into every receptor, like rain’s discovery of an ingress in ‘impermeable’ clothing. The wealth of invention, of suggestion, in her latest collection is overwhelming, leaving the reader aghast at her lexical brilliance, her feeling for, and utter embrace, of language’s transformative powers, through the dissemination of knowledge and its mystical relationship with perception.

Speaking with Two Tongues may describe the multiform potential of language to perplex, to impress, to doubletalk, but here it does so kaleidoscopically, playing around the margins of time and intention, holding authorial court in outrageous ambivalence.

Daft, perhaps, to suggest that the poet’s grounding in drama – she trained to be an actor - invites a kind of lyrical duplicity; figurative floors and walls shift in Two Tongues, but the collection is unified in the joyous embrace of words – Toutoungi is a celebrant of possibility in linguistic transgression. And if ambiguity is the price of the book’s appeal, it is worth being blinded by the lambent stream of light in which it is delivered.

In a world of spurious tokenisms, ‘Affirmations’ takes a scalpel to the industry of awards, foundations and prizes in least-likely juxtapositions which act, instead, to celebrate the humdrum art of domestic survival:

‘The Plogoff Prize for Most Convincing Badinage With Plants
The Laurenson Award for Extreme Yawning
The Mitzy Duval Prize for Mild Dismay’.


Also by Steve Whitaker...
Poem Of The Week:Owdham Footbo' By Ammon Wrigley (1861-1946)Poem Of The Week: The Wireless By Jean StevensBurned By Light: Dovetailing - Gathered NotesNight Swimming:Towards A General Theory Of Love By Clare ShawPoem of the Week: 'Together' By Robert Gibson
Toutoungi’s wit, which is as natural as breathing, is a useful means of expressing the tongue-in-cheek alongside the serious and the artful; her polymathic intelligence provides the materiel for exploring the margins between the two - the quietly unobserved, the arcane, and the incidentals whose suggestive presence amounts to much more than ornamental utility. Like a glass eye. Glaucoma occasioned the loss of the poet’s right eye some years ago, and it is bravely characteristic of her approach to be crafting a poem whose skilled clotting of images precisely measures another way of ‘seeing’ in the attitude of its prosthetic replacement. Invested with sentience, the insouciant eye of ‘Interior With Still Life’, removed and resting on a sideboard, semantically aggrandised like a Renaissance bowl of fruit, is disposed to represent its owner’s resistance to blandishment, and brute dismissal of the ‘improving’ coterie in which it might otherwise be framed:

‘If it were a dog it might have rolled
over, but it didn’t bother. Blissed
out in that posture. Disposed to not
take in what was on offer: wonky
mirror, ceiling crack, portion of a picnic
by Cézanne.’

The poem might be a sonnet because it has fourteen lines, and it might not. But the question need not signify because the ground over which Toutoungi’s narrator moves is as elusive as uncertain form. A sense of wishful-thinking propels her imagination towards other possibilities, as though in a surreal drama played out in a glass case, closed to outside intrusion but entirely visible. And discovering, as she does in an opener which insinuates the notion of illusion in its title, the extraordinary, the ‘incomprehensible’ in a landscape of remote, but perfect, aeonic continuity, we are gifted, in ‘Rift’, the ironic simplicity of uncluttered vision.

The delightfully playful ‘By Small Signs We Betray Ourselves’ continues the theme of pretence, in a lyrical examination of the distance between appearance and reality. Toutoungi’s great skill is in finding unusual vehicles in which to nail irony: an interchange of simple couplets disengages the dynamic of comfortable aspiration from the stale and morbid fact of endurance:

They know you put your faith in soda powder
swallowed by the vat to neutralise your internal acidity.

miniature as you are,
you can’t keep hiding.

The amygdala knows its own agenda.
The hippocampus, lately, likes to grass.’ 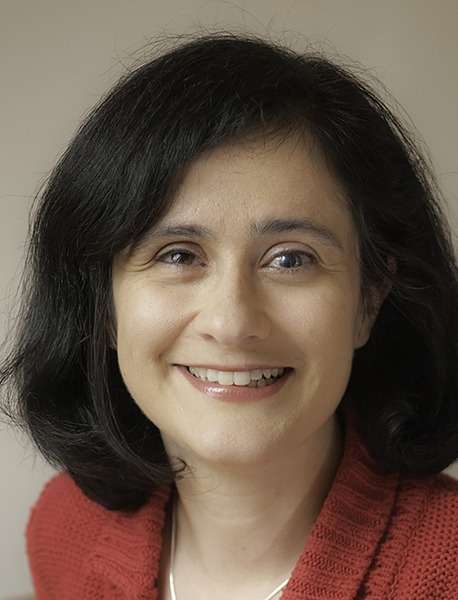 Claudine Toutoungi
The body’s yielding of organic detail is earnest and painfully self-lacerating; it is programmed to advertise its shortcomings, as though the necrotic interior was the inside of a canal lock. We give the game away, Toutoungi’s lines say, in as tersely brilliant a rendering of decrepitude as you are likely to read. ‘Zugswang’ delivers another form of pretence in the ‘selfless’ appeasement of others, even where the process of rolling over is counter-productive. The result is self-delusion, except that the poet, here and elsewhere, is examining an emotional complexity in which both parties are complicit. In this sense, the fait accompli of a Zugswang move is a forensically accurate summation of a kind of inevitability: the fractured chords that the ‘slum donkeys of Marrakesh’ bray become cacophonous when the wheels of concession and compromise roll over and break at their weakest point:

‘If you hadn’t known the German for lose/lose, if you
hadn’t the face of Dürer as Christ in Self-Portrait of

Dürer as Christ, this could have been a whole lot
easier.’

Toutoungi’s interior dialectic is realised as subtly, and with as much of an instinct for self-preservation, as a Cephalopod wearing luminous camouflage. But her words, ingenious and committed to the exploration of self-doubt, guilt, love and ambiguity, are never wasted. Going for a definition of the human condition through individual experience, Two Tongues is both ambitious and heroically self-exposed.

And, in places, very funny, because that definition demands a release of escapist fantasy alongside the search for clues in the undergrowth of human paradox and inconsistency. Whilst the ‘chronic celebrity’ – wonderful, succinct phrase - of Benedict’s own admission in ‘Cumberbatch’ is vouchsafed as narrator and actor shoot the breeze in a dream, the world of ‘The Therapists of my Friends’ is rediscovered in the quotidian, like irritating background music or tapas menus, in the performance of daily rituals which are one means of avoiding the horrors of the psychiatrist’s chair. Such mind-numbing, repetitive joys – ‘in the single bark every fifth hour / of an unseen dog’ – remind us we are alive.

Which we are, ineffably. Jolted into life by the quickening of Toutoungi’s elegant wit, I am reminded, obscurely, of Peter Reading’s application of a satirical rapier to injustice, stupidity, and the risible ‘wrongness’ of existence. When we can’t find the name for travel agent hyperbole, we resort to counterpointing it with the ditchwater dullness of things which make painful sense, like haemorrhoids, or ‘Alpine / Dry mouth, Alpine short fuse, Alpine intermittent gloom’ (‘There Should be a Name For’).

The act of separating the wood from the chaff, ensuring that there is a recognition of the difference, elevates this poetic voice to moments of transcendence. ‘The Architecture of Sky’ is a simple and very beautiful extrapolation of aesthetic understanding from the geometry of certainty; envisioning the purity of the natural world in the ironic language of that which can only be mimetic, Toutoungi finds resolution in a counter-intuitive, and deeply affecting, compromise:

‘the architecture of sky

is the song of a robin
whose Cubist grammar

is holding us up.' 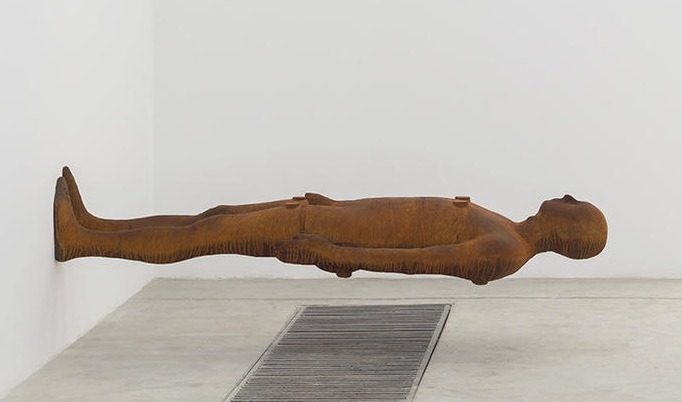 Edge III by Antony Gormley
Elsewhere the sky is held aloft by ‘The Man who Learned English from a Poetry Book’, and is unable to connect with the anodyne niceties of small talk; he occupies a space above the vernacular mainstream, but remains lexically remote, like the effortlessly polysyllabic, Polish-born Joseph Conrad, who accounted for his lack of Englishness in eloquence.

But nothing, in this superlatively acrobatic collection of poems, subverts perception better than ‘Suspension’. Antony Gormley’s sculpture of a prone man emerging horizontally from a wall, with no means of support, provokes, in the narrator, a hymn to ambiguity no less abstruse than the meticulous argument of a Donne sonnet. The boundless question of his levitation – his beautifully-observed massy presence and imagined demeanour add to the ambiguity – is confounded still further by the possibility of mute meaninglessness masquerading as profundity. But with the lightest of touches, and in characteristically unpredictable mood, Toutoungi finds a species of freedom in imaginative projection:

if its mouth
were more than the suggestion of a mouth

but its axioms its quips
its saws hang

Two Tongues is published by Carcanet