Still Life Worth More Than £6m At Risk Of Leaving UK

Banquet Still Life by Jan Davidsz. de Heem, which is valued at £6,109,200, is at risk of leaving the country unless a UK buyer can be found. 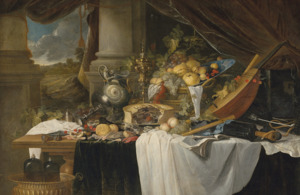 Banquet Still Life by Jan Davidsz. de Heem, which is valued at £6,109,200, is at risk of leaving the country unless a UK buyer can be found.
One of the most important still life painters in the 17th century, de Heem was typically known for smaller paintings, making this monumental work incredibly rare within his body of work and one of just four he completed of this size, all done between 1640 and 1643.

It is a beautiful and impressive example of Dutch ornate still life painting known as ‘pronkstilleven’, and shows de Heem excelled in the depiction of forms and textures.


Arts Minister Lord Parkinson of Whitley Bay said:
"This captivating painting is magnificent not just in size but also in its exquisite detail. De Heem’s enormous talent is evident in this rare piece and I hope a buyer comes forward so it may be enjoyed and appreciated by viewers in the UK for many years to come."

The Minister’s decision follows the advice of the Reviewing Committee on the Export of Works of Art and Objects of Cultural Interest (RCEWA). The Committee agreed the sumptuous detail of each of the elements and the extraordinarily realistic rendering of a variety of materials and textures made this an outstanding example of the pronkstilleven style composition the artist made uniquely his own. The possibility this was produced as a commission, potentially location-specific, added to its interest. In addition, the Committee found the painting’s long provenance in a single collection remarkable.


Committee Member Christopher Baker said:
"De Heem’s splendid still life combines grandeur in terms of its scale with numerous exquisitely wrought details that encourage close looking. Man-made and natural wonders, such as Chinese porcelain and exotic fruits, tumble across the canvas, conveying great wealth and the pursuit of luxury, but also perhaps implicitly that the pleasures they signify are ephemeral. It is one of a group of works by the painter created in Antwerp in the early 1640s, which through their ambition and complexity marked not only a new phase in the development of his career but also a leap forward in the evolution of still life painting and its sumptuous possibilities.

"The artist’s magnificent pictures of this type appealed to distinguished collectors: an example in the Louvre had by the 1680s been acquired by Louis XIV. In this case the original patron is yet to be identified and the painting has only recently been re-discovered by art historians; it has however been in a private UK collection since the early nineteenth century and every effort should be made to retain it so it might delight and interest and benefit British gallery visitors."

The Committee made its recommendation on the grounds the painting’s departure from the UK would be a misfortune because it is of outstanding aesthetic importance.

The decision on the export licence application for the painting will be deferred until 20 April 2022. At the end of the first deferral period owners will have a consideration period of 15 business days to consider any offer(s) to purchase the painting at the recommended price of £6,109,200 (inclusive of VAT). The second deferral period will commence following the signing of an Option Agreement and will last for six months.