Sitting with my granddaughter before the show started, I was a little unsure what to expect but I have to say the excitement of the young audience carried me into one of the most enchanting afternoons I have had for a long while. A cast of three kept the audience (mainly under 6 years of age) entertained for an hour, with songs, dancing, miming and even a bit of panto-esque audience participation.

Stick Man is a book written by Children’s Laureate Julia Donaldson and this stage adaptation by Freckle Productions follows his adventures as he goes out for a morning jog and runs into a dog who wants to chase him, a swan who wants to use him to make her nest and a little girl who wants to use him to play Pooh sticks. Following an underwater adventure, he washes up on a beach where he gets involved in more fun and games before being rescued by a very magical gentleman and taken back to his Stick Lady Love and their Stick Children Three.

The set is simple but highly effective, even so the success of the show relies on the talents of the fantastic three actors who seamlessly go from one character and costume to another, even providing some of their own musical accompaniment. The enchanting score by Benji Bower helps the production bounce along with simple songs that youngsters will find easy to pick up.

Luke Byeford (Stick Man), Georgia Jackson (Stick Lady Love and other roles), Patrick Orkney (Musician and various roles) make a very cohesive cast. I cannot praise those working in children’s theatre enough. They have to be all the more expressive and captivating in their delivery and have almost boundless energy. It is much needed when playing a relentless dog intent on getting a stick – or Stick Man himself. The main character is represented on stage as a prop and a human character. These actors may not be taking the plaudits of their more famous colleagues on the West End but they are helping to bring a new generation of theatre lovers. 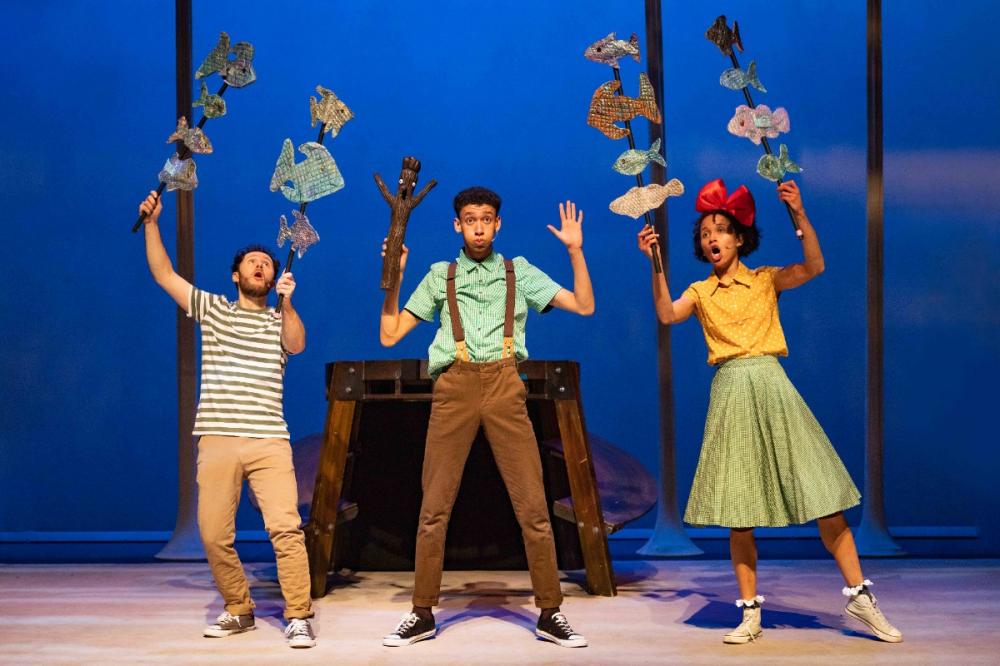 Luke Byeford, Georgia Jackson and Patrick Orkney
All the scenes were simple but effective relying on a young person’s imagination and wonder, the most effective was the underwater sequence which was wonderfully staged and performed. There is a little of a panto feel about some of the dialogue (more aimed at adults than children, just to keep us awake) and an audience participation piece got the children joining in. With a magical man taking Stick Man home to his Stick Lady Love and Stick Children 3 in time for Christmas providing a satisfying conclusion for the mainly the young audience.


Luke Byeford, Georgia Jackson and Patrick Orkney
At the end of the performance my granddaughter and I had had more fun than you could shake a stick at and she talked incessantly about little scenes and what they meant. What a perfect way to introduce your young child to the magic of theatre and at just under an hour you don’t have to worry about them getting the fidgets.