Stepping Into the Light: Genesis at Leeds Arena 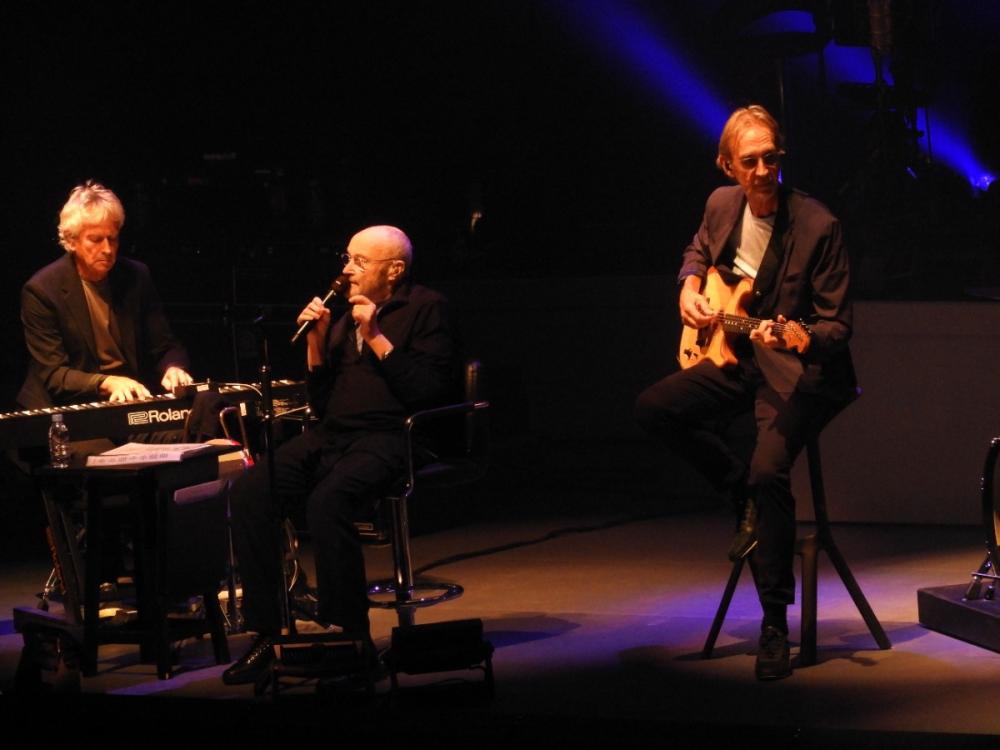 The Last Domino tour was always going to be a crowd-pleaser. And whether you favour the nether regions of the early Seventies and the Gabriel-infused theatrical dramas of Selling England by the Pound and Lamb Lies Down on Boadway, or the swathing anthemic interludes of And Then There Were Three and Duke, you were sure to find a musical home at the First Direct Leeds Arena on Tuesday.

The three remaining Genesis lions – Banks, Rutherford, Collins – roared in figurative earnest last night. Much reduced in physical circumstances – his well-documented decline has been precipitous and shocking - Phil Collins said it best: It’s been a hard couple of years for all of us, and Genesis were going to give us something to remember. And they, and he, consoled us in spades. 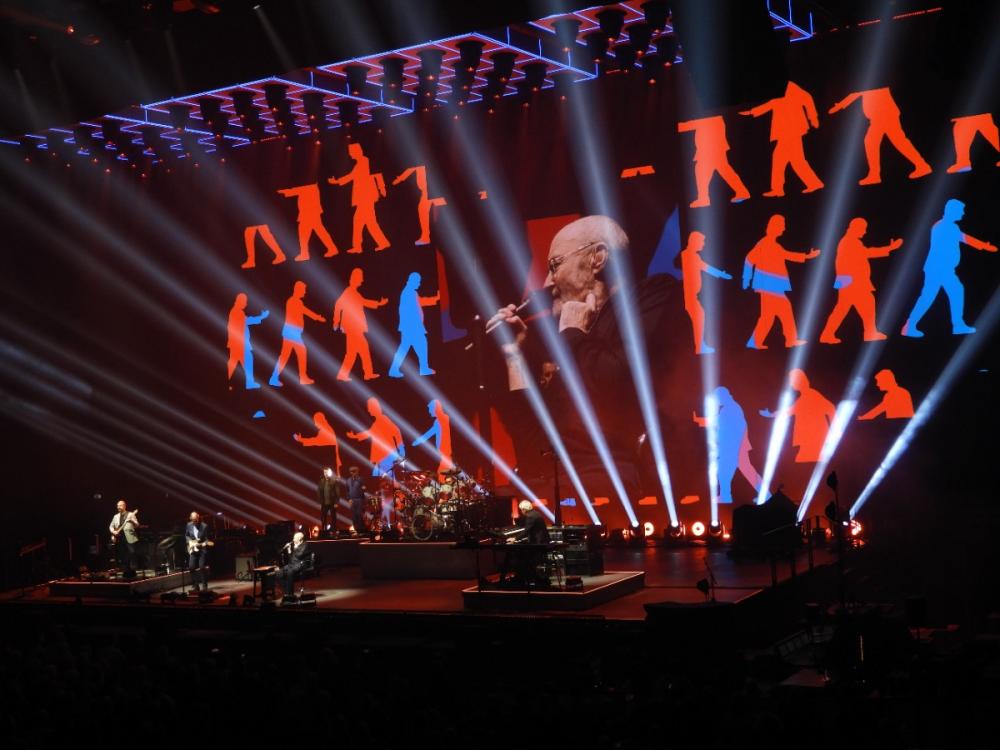 Hobbling on stage with a stick, and seated more or less throughout, Collins recognised the irony of his debility. Acting as mouthpiece and raconteur for the performance, the septuagenarian regaled the full house with a neat line in wit and self-deprecation, marked, especially, by a hideous rictus of a snarl in the dark mantra of ‘Mama’, and rendered unbearably ironic in ‘I can’t dance’, which was played against a backdrop of endlessly ambulant silhouettes of the band members in an earlier incarnation. Collins deserves huge credit for taking to the stage at all, and if his voice is a beat behind the pace at times, his power and range sustain. The two, phenomenally able, backing singers – Patrick Smyth and Daniel Pearce - lifted Collins’ own vocal authority to a higher plain, as they enabled a kind of parity with the natural grandiosity of the instrumental suites.

After the thrilling opening of ‘Behind the Lines’ and a bouncing, robust ‘Turn it on Again’, Collins reminded us of the evergreen serviceability of great songs: ‘Land of Confusion’ sounded increasingly relevant in the current climate, not least when set to an astonishingly inventive, and Magritte-surreal filmic canvas of mask-wearing ‘drones’ and roiling mountains of panic-bought product. As, too, did ‘Home by the Sea’, whose understated title betrays a peeling façade of decay and whose relentless rhythm suggests creeping unease. 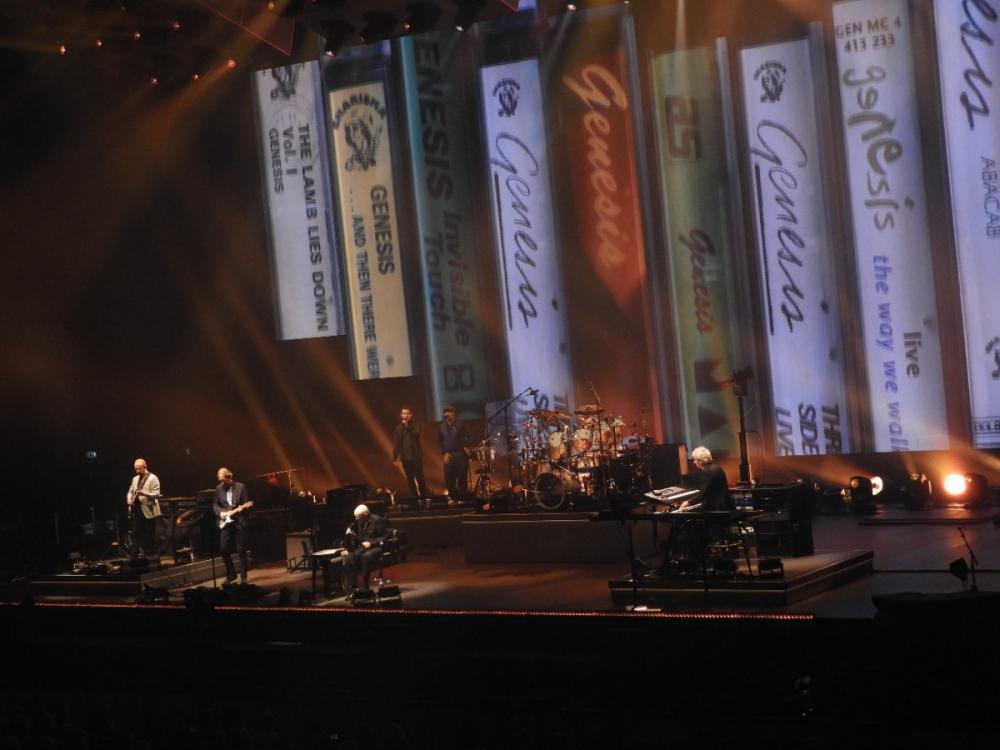 The slight anaemia of the evening’s central sequence – an acoustic triptych – was strangely counterpointed by the intimacy of the setting: the band foregathered at the front of the stage for the three numbers, and if ‘Follow You, Follow Me’ lacked the repetitive thrust of the original, the delicate rendition of ‘Lamb Lies Down’ yielded a backward glance at the subtle complexity of Genesis’ early work.

The shifting of gears seems effortless for musicians of such time-served competence. To say Genesis are ‘tight’ in the unitary sense is to downplay a technical brilliance that owes as much to mutual simpatico and timing as to rehearsal. The third set of the evening opened with a breathtaking rendition of ‘Duchess’, whose thunderous chords opened a window on Tony Banks’ oceanic keyboard skills, and gave full vent to Collins’ gift for unbuttoned emotion. So, too, with ‘No Son of Mine’ and ‘Throwing it All Away’; the echo of the latter’s voice will linger long in the memory. Which is never to gainsay the focus of Mike Rutherford’s assured contribution to the band’s twin axes of power and subtlety, or the work of long-time Genesis collaborator Daryl Stuermer on lead, whose interchanges with Rutherford gave force to the anthems, and crystalline individuality in the musical interstices. Banks’ near-classical arpeggios in ‘Firth of Fifth’ were suffixed by some fabulous virtuoso guitar. 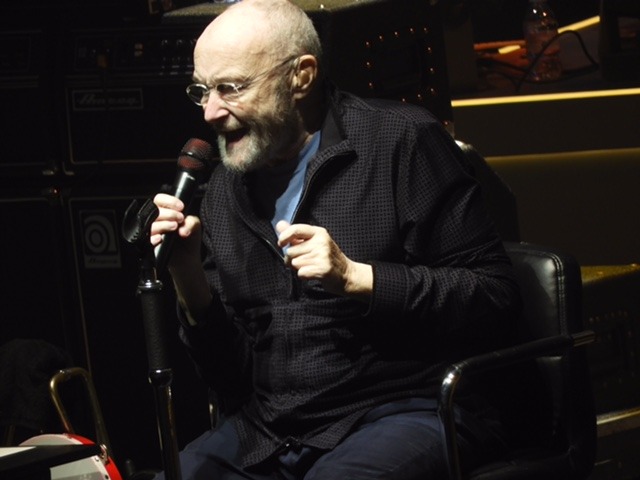 The lengthy, hypnotic ‘Domino’, played to a backdrop of grey toppling stones, carried the weight of an installation in its semantic wake, before caution was cast resolutely to the wind for a glorious, uptempo take on ‘Invisible Touch’, whose downright flair will introduce an ear-worm to many for days to come. Returning to their roots, the band’s final encores of ‘Dancing with the Moonlit Knight’ and ‘Carpet Crawlers’ sounded an elegiac bell, as the memory of a fifty year history rolled away like so many album sleeves and faded images.

A word for the jaw-dropping drumming of Collins’ son, Nic, who played like a demon, and filled the shoes of his father with great heart and energy. When, on a couple of occasions during the performance, the father turned to watch his son, it could not but have been without immense pride, and regret.

If this does, as seems likely, turn out to be Genesis’ swansong, it will long be remembered.

Genesis: 28th September at the First Direct Arena, Leeds, and touring until December.

All Images by Graham Clark