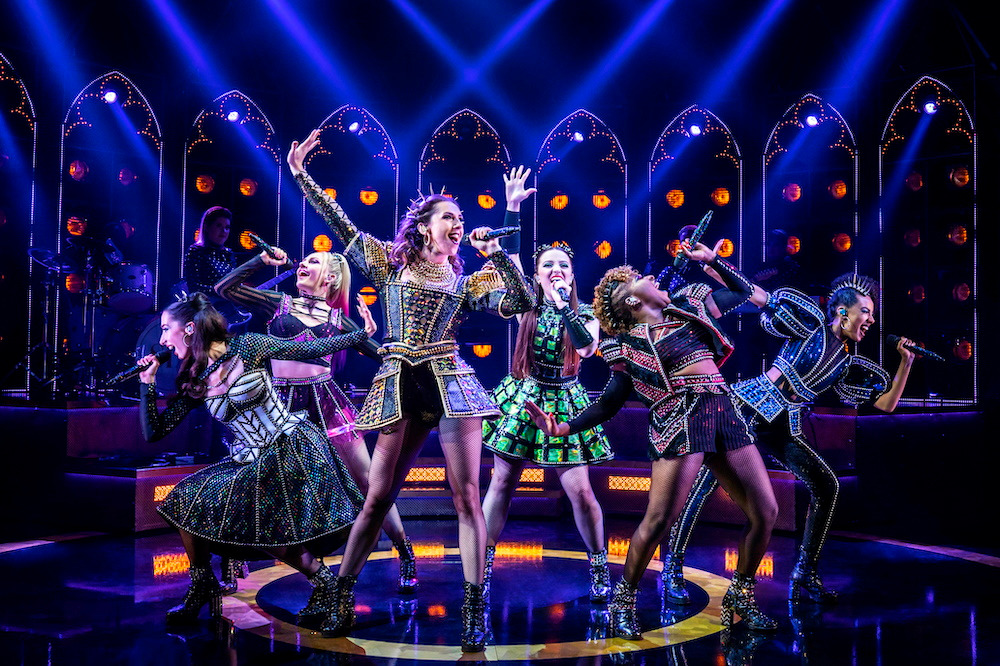 From the Tudor queens of our history lessons to the pop princesses of today, the six wives of Henry VIII finally take to the stage to tell their stories, remixing five hundred years of historical heartbreak into an 80-minute celebration of 21st century girl power. It is a tale you won’t have read about in lessons and certainly puts a differing perspective on anything learnt in the school room!

Written by Toby Marlow and Lucy Moss, the Six Queens gather together to compete to be crowned the ultimate Queen, each to tell their story and be assessed by how much they suffered at the hands of Henry VIII and his court.

Their collective girl power rises to put the king firmly in the shade and stake their place in history, or ‘herstory’. Their marriages were bloody, messy and church-reforming and have been scrutinized over the years by many a historian, but the difference now is that they are telling their stories, on their terms and in a way that is almost unique in musical theatre.

The tone is set by the rousing opening number ‘Ex Wives’ setting the bar high, but when each of the Queens get their opportunity to take to the spotlight and go solo to tell their story, the reaction from the audience was deafening.


“You must be so exhausted singing all those backing vocals” says one Queen to another.
Each of the ex-wives personify a couple of modern day pop ‘queen’ inspirations.

Catherine of Aragon (with a nod to Beyonce) is played by Chloe Hart, who both moves and sounds like a pop princess.

Jennifer Caldwell is brilliant as Anne Boleyn. She does rather rule the roost with her Lily Allen-inspired attitude and frequently uses her beheading as a tool to knock the other Queens down.

The heartbroken Jane Seymour (Casey Al-Shaqsy) gave more than a passing nod to Adele, with her ballad ‘Heart of Stone’ providing the perfect change of tone and pace.

The surviving Queen, Catherine Parr, was played by Alana M Robinson who had stunning vocals and ably carried the story (and the other Queens) in a slightly differing direction.


photo by Pamela Raith
All supported throughout by the brilliant Ladies -In -Waiting – the band.

The Queens move from initially competing with each other to supporting one another via their clever, funny and occasionally moving musical numbers, despite the many clever, sharp one-liner put downs “You must be so exhausted singing all those backing vocals” says one Queen to another.

The costumes designed by Gabriella Slade are exceptional, managing to maintain a nod to Tudor fashion whilst at the same time being not out of place for a modern day girl pop concert. Tim Deiling’s lighting design is just as exciting and colourful.

The show is brilliant and I learnt more about the six wives of Henry VIII than ever I managed at school. These Queens do not disappoint.

Grab yourself a ticket for the best half rock concert, half history lesson ever.

You won’t be disappointed!