Reviewing The Osmonds - A New Musical

They sold over one hundred million records, their posters were displayed on many a teenagers' bedroom wall and they were probably one of the first American boy bands, yet up to now there has never been a musical to tell their official story.

It is narrated by Jay Osmond, played by Alex Lodge, about his five brothers from Utah, pushed into the spotlight as children and who went on to create a series of smash hit records.

The audience hear of the highs and ultimate lows of stardom. The show opens with One Way Ticket To Anywhere the brothers are in concert mode, wearing suits that were nearly as white as their toothy smiles.

They might not look too much like the original members of the group but close your eyes and you could be fooled into thinking you were back in the early seventies at one of the concerts.

The story begins in 1963 when The Osmonds had a residency on The Andy Williams show. Alex Cardall, was superb as Williams bringing a certain cheesiness to the role. The youngsters were a delight with their enthusiasm and vocal harmonies being early highlights in this fast paced production.

Charlie Allen as their father George brought a commanding presence to the stage: his army training of discipline and hard work was instilled into his children whilst Nicola Bryan as their mother Olive was always present to give reassurance and a loving hug. 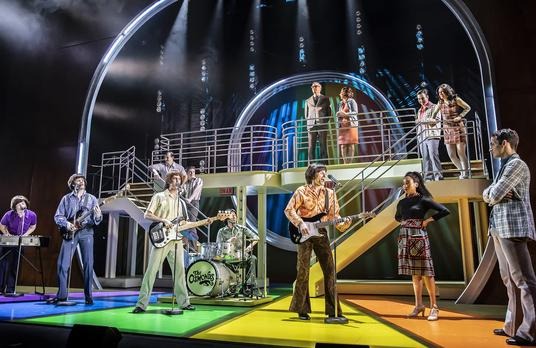 As the boys become teenagers their success leads to Europe with chart topping albums, selling out arena concerts and making record-breaking TV shows. The revealing storyline deals with the tensions within the group at the height of their success including how one bad decision, investing in their own studios, cost them everything.

Ultimately, the songs are the real stars of the evening. The majority of the audience sang along and cheered at every opportunity; they could have been original fans of the group fifty years ago.

It would be a disservice to call it a jukebox musical as director, Shaun Kerrison, created a thrilling and captivating atmosphere that prevailed throughout the show.

Naturally the best songs were kept to the end with Crazy Horses and One Bad Apple being a joyful finale. I was never a fan of The Osmonds but after a night of drama and nostalgia I found this to be a revealing insight which will leave you dancing into the aisles.

The Osmonds - is on tour