Review: Everything I See I Swallow at Square Chapel 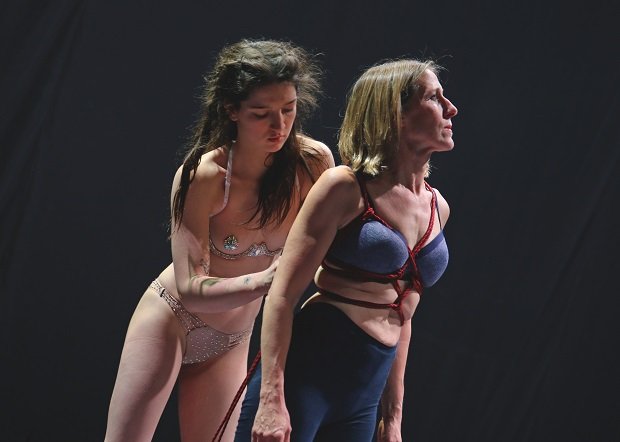 Maisy Taylor & Tamsin Shasha credit Sean Longmore
The truth of French avant-garde artist Orlan’s belief that art should herald resistance, take risks in the name of effecting change at the risk of not being accepted, was borne out in the very act of performance in Friday’s breathtaking rendering of Everything I See I Swallow at Halifax’s Square Chapel. Tamsin Shasha and Maisy Taylor’s visceral two-hander bolstered its own intellectual credentials with the declamation of a series of philosophical vignettes, emboldened in backdrop, and including, at the outset, Orlan’s own definition.

And cutting-edge the drama is, not least in its exquisite complexity of argument. Taylor’s character of Olivia, who, like Ixion broken on the wheel, is suspended and knotted in ropes as we enter the auditorium, is excoriated by her mother for Instagramming her body to priapic fantasy, and acquiring a huge audience of male followers. Olivia’s inability to reconcile an early sense of her own beauty, without also recognising the sense of ownership inherent to the omnivorous male gaze, is balanced with butterfly fragility in Taylor’s portrayal. Her abandonment to male fantasy by a separation of self from body, makes an elitist irony of the liberal mother’s (Shasha) inability to assimilate this new proclivity in a landscape of consciously observed feminism which she helped to assemble: ‘You’re middle class ! I didn’t bring you up to behave like Jordan.’

It is significant that the vagina the mother rediscovers later in the drama should yield an outraged incandescent orgasm at the thought of a no-deal Brexit and chlorinated chicken. In a scene that is both shocking and shockingly funny, the mother takes a counter-intuitive size nine to both Johnson and Trump, as she celebrates her long dormant mojo in an unconditional volte face. Anger, as John Lydon noted, is an eloquent manifestation of energy. 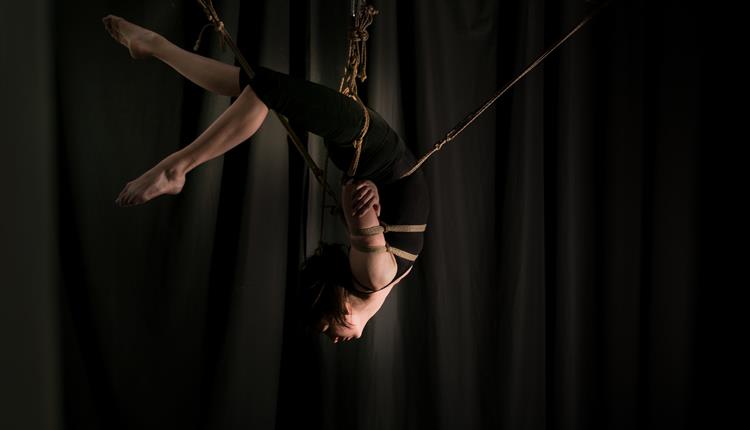 Interpretation is kaleidoscopic here, and the performance’s clear mandate to explore the boundary between pornography and art does not flounder in ambiguity, as well it might. That conundrum, worked tortuously in the tireless locution of movement – a knot both literal and figurative - reminded me, obscurely, of the reception of D.M. Thomas’ seminal novel, The White Hotel. Many contemporary observers were unaware, during the book's several passages of erotica, of the intrusion of the guiding hand of Freudian suggestion, and were therefore blindsided to the possibility of artistic evaluation by vivid depictions of masochism and masturbation. For Shasha and Taylor, conspicuous nakedness is integral: suspended on a sharpened axis of vulnerability, honesty and liberation from preconception, the female form is an essential dynamic of recognition.

...and an overwhelming material component of the self-referentiality of this astonishing performance. A mirror in a mirror – the reflective floor echoes a predatory sexual voyeurism as it renders mutable the line between art and life – Everything I See I Swallow measures the working of art by the standard of lived experience: the portrayers and the portrayed are persuasively interchangeable; Maisy Taylor’s strip club and cabaret work, her sense of movement and timing, her demeanour of ennui punctuated by sudden, violent animation, bolster the authenticity which gives the piece its phenomenal resonance.


Also by Steve Whitaker...
Poem Of The Week: ‘All The Pubs Where We Used To Meet Are Sinking’ By Carole Bromley'These Are The Hands' : Many Different Kinds Of Love By Michael RosenPoem Of The Week: 'Going Blind' By Rainer Maria Rilke (1875-1926)Review: The Devil And The Dark Water By Stuart TurtonPoem Of The Week: 'All' By Alison Brackenbury
Tamsin Shasha’s own instinct for rendering dramatic tension in physicality, the sense of a dam of energy locked in a physique, and waiting to burst into ‘organic’ life like the rough-hewn stone that became Michelangelo’s David, is founded in her long experience with Actors of Dionysus. The use of exquisite circumlocutory movement to establish mood, repression, release, is never more effective than in the utterly beautiful and entirely airborne reconciliation of mother and daughter, played to a precisely-judged and near-votive musical score by Matt Eaton. The investment of terpsichorean skill and commitment infuses a languid moment with a sense of profound elegy, and wraps the painful volatility of our existence in the dynamism of love.

A male reviewer who should or should not have been discomfited by a dramatic articulation of the sexual objectification of women came away with a reinvigorated understanding of what it means to be female in a time of rapid cultural and technological evolution.

This was a performance of rare beauty and vision.


Everything I See I Swallow is currently touring.