Review: What Is A Bong Tree? By Michael Rosen 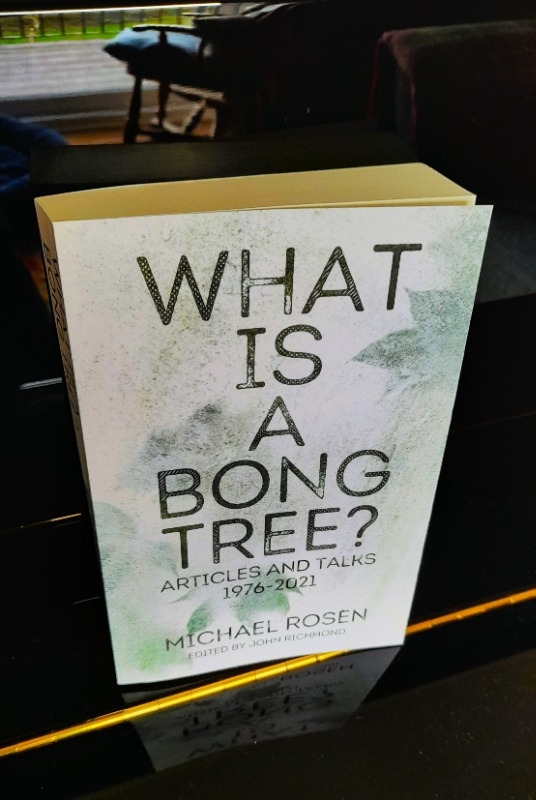 Sometimes, post arrives that lightens the day and puts a spring in your step. What is a Bong Tree?, a selection of articles and talks by Michael Rosen over several decades, had that effect a few days ago when it landed with a satisfying thud on the mat by our front door.

During my teaching career, Michael Rosen (prolific author and political columnist, teacher, lecturer, television and radio presenter, Children’s Laureate from 2007 – 2009 and poet god) was a figure of great authority among colleagues at school. As a writer responsible for poetry and prose encouraging fun and creativity in English among the children we taught, his poems and pronouncements in the theatre of language and literacy were a source of entertainment, enlightenment and comfort during a time in education when just about everything I’d learnt and believed in at teacher training college was under attack.

I graduated in the eighties, having studied at Charlotte Mason College in Ambleside where a child-centred pedagogy was developed and practised, but I spent the early part of my career coping with the imposition of Kenneth Baker’s ‘National Curriculum’. At a meeting with student teachers in late 1987, a junior minister from Margaret Thatcher’s government (I forget who he was) assured us that proposed educational changes would have no effect on how lessons would be taught; that was going to be left to the ‘professionalism of practitioners’.

What followed was over thirty years of repeated top-down initiatives and micro-managing through the implementation of the Literacy Hour, the Numeracy Framework, SATs, League Tables and Synthetic Phonics, all policed by an army of advisors and the ever-present threat of punitive inspections delivered and driven by a data-obsessed OFSTED.

Unless you had a head teacher and governing body with the strength of conviction to run a school based on deeply held beliefs about what constituted a worthwhile and relevant education, the likelihood was that pupils’ experiences would become impoverished through phenomena such as ‘teaching to the test’ and a narrowing of the curriculum to produce the sort of SAT results that would keep OFSTED happy.

There was a brief period when a glimmer of hope shone around 2009/10, following extensive research and a report published by Sir Jim Rose on what truly worked in a curriculum designed for primary children. However, the prospect of the launch of the ‘Creative Curriculum’ was immediately dashed once Michael Gove and his chum Dominic Cummings were given the keys to the DfE. Gove’s baby was delivered in the form of a so-called ‘knowledge rich’ curriculum, heavily laced with spelling, punctuation and grammar content that wouldn’t have been out of place in the lower sixth syllabus of a fifties Grammar School.

Through all this turmoil and interference by politicians over the last thirty-five years, there were a number of well-respected and eminently sensible voices I’d tune into in order to keep spirits and sanity afloat: Sir Ken Robinson, whose analyses of the role of creativity in educational systems hit so many chiming chords; Professor Mick Waters, my old tutor from Charlotte Mason College, whose brief time as Director of Curriculum at the Qualifications and Curriculum Authority (QCA) saw that glimmer of hope with respect to the creative curriculum (cruelly dashed with Gove’s appearance on the scene); and, of course, Michael Rosen.

Michael Rosen’s writings and talks about the power of literature, including children’s stories and poems, have been an encouragement, source of inspiration and antidote to the reductionist actions of governments over my time as a teacher and deputy head. His latest publication What is a Bong Tree? edited by John Richmond, features his articles and talks over the period spanning 1976 to 2021.

With references to his childhood and wonderful tributes to the influence of his parents, Connie and Harold, Michael Rosen’s body of work within this book is communicated with both humour and the authority you’d expect from one so respected by those concerned with the nurture and education of children within our society.

When my copy of his articles and talks arrived and I opened the packaging to reveal the book within, it felt like Christmas all over again. Reading through the collection of lectures, talks, poems, articles, blog entries and other written features felt like meeting and talking with a supportive friend who one hadn’t seen for a while and with whom a catch-up was overdue.


Also by Jonathan Humble...
Poem Of The Week Children's Special: Head In The Clouds By Charlie BownThe Balloon Goes Up: Adventures In Children’s PoetryChasing Clouds - To See The World Through Poets’ EyesThe Artist As Poet: Quest For Ions By BrowzanThe Dirigible Balloon: Preparing to Launch a New Webzine for Children’s Poetry
I found myself nodding in agreement throughout each piece: with his appreciation and understanding of great authors; of how books are such a rich resource and can make deep connections in different ways within our lives; of worrying anecdotal evidence (which I have witnessed first-hand) suggesting that a number of schools have concentrated on story fragments rather than reading whole books, in attempts to train pupils for aspects of Standard Assessment Tests. In fact, Michael Rosen’s analysis of the comprehension questions following a reading SAT story called ‘You Can Do It’ (in a lecture he gave at Middlesex University in 2005 entitled ‘Are Books for Children Worth Reading?’) triggered a mild anxiety response from the days I taught year 6 pupils and had the dilemma of juggling time spent on SAT preparation with other work concentrating on nurturing a more substantial and relevant love of literature.

Towards the end of his analysis of the reading SAT paper and the processes children are expected to master in order to meet the expectations of examiners, Michael Rosen comments:“This leaves teachers in their daily practice with the job of setting children this kind of question so that the children can learn how to make their mind-reading guesses fit the examiners’ requirements more and more closely … this has nothing to do with encouraging children to respond to what stories feel like to them, nothing very much to do with daring and experimenting with what they might think the story might be about. Nothing to do with investigating story for all its possibilities. And it’s this readerly sense of indecision, wonder and experiment that many writers deliberately play with. Vital to active writing and reading; irrelevant to SATs examiners”.

At this point, in my mind, the teacher I was back in the day leaps from his chair, punches the air and says “that’s so true!’

What is a Bong Tree? is sprinkled in different sections with a wonderful array of poems written by the author and other poets in order to illuminate and/or substantiate the points made. He moves seamlessly and with authority through the articles in a friendly and supportive style which generates in the mind what feels like an almost audible soundtrack of the author’s distinctive voice; a consummate critical friend.

In the piece from his blog about ‘The Poetry-friendly Classroom’ he is there at your shoulder, offering friendly advice about poetry swaps, poetry shows and poem posters. In a lecture delivered at the Centre for Language in Primary Education in September 2007 (‘What is a Bong Tree?’), he moves us away from those traditional comprehension and fact retrieving approaches after reading a poem. Poetry shouldn’t stand “as a kind of assault course, a training ground in answering closed-ended questions with an end result that has very little to do with feelings or meaning”. Poetry in schools ought to be both a significant and enjoyable way to spend time; the reader’s place in the poem and the poem’s place in the reader is at the heart of the process. This could also include creative processes such as painting, dance, drama and other practical performance arenas to help gain that understanding of feeling and meaning … to my mind fundamental in what primary education should be all about, but which is being squeezed out by the absurdities of trying to please examiners, OFSTED et al.

As one who experienced first-hand how the ‘professionalism of practitioners’ has been undermined and compromised by successive Westminster administrations since the eighties, I came away from the book with a feeling of vindication; the business models applied to education have been divisive and detrimental to any real progress in terms of what children should experience in schools. Michael Rosen has been a true, erudite and clear advocate for these children over the last five decades; the evidence is here in this book … long may he continue in that role.

What is a Bong Tree ? is a rich and detailed resource filled with a treasure of authoritative writings and talks about language and literature from an author greatly admired in his field and beyond. It is available through Michael Rosen’s website at www.michaelrosen.co.uk and I thoroughly recommend it.