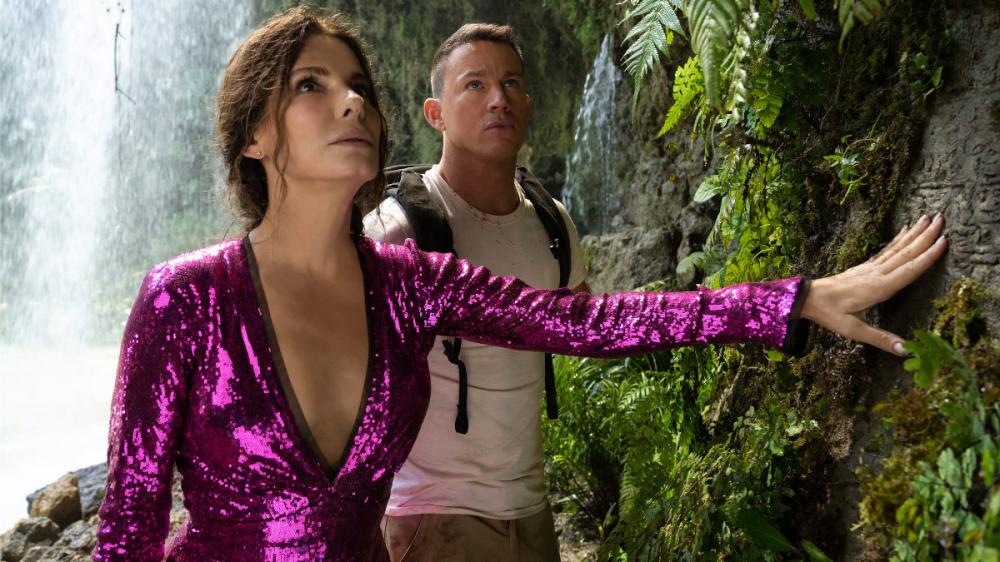 Who doesn’t love a good treasure hunt? And, as we venture nearer and nearer to summer blockbuster season, a film like The Lost City feels most welcome on our big screens.

However, despite the comparisons to Steven Spielberg’s landmark Raiders of the Lost Ark, it is the blood of Robert Zemeckis’ Romancing the Stone which races through the veins of the Nee Brothers’ enormously enjoyable throwback jungle action/comedy romp, which comes with some modernised trope twists.

The film stars Sandra Bullock as Loretta Sage, a successful but withdrawn bestselling romance novelist, who has grown tired of her work and distant of the world around her. Yet, at the behest of her enthusiastic publicist Beth (Da’Vine Joy Randolph), Loretta goes on a book tour for her latest novel, and is joined by her flamboyant cover star Alan Caprison (Channing Tatum), who plays the part of her novel series hero “Dash”. But when Loretta is kidnapped from the tour and forced into her own treasure hunt at the mad whims of billionaire Abigail Fairfax (Daniel Radcliffe), Alan decides to stop playing a cover hero, and try becoming a real one.

Initially Bullock apparently turned down The Lost City, feeling it to be a bit outdated a story, yet this film is a caper that is just the right balance of now and then. Adam and Aaron Nee, Dana Fox and Oren Uziel’s screenplay is constantly funny, filled with action and driven by a treasure that is bigger than just gold.

Admittedly, the destination may be a little gooey for some tastes but there is a worthwhile point here about how passion can be extinguished by trauma, but also rescued by the warmth of the memories left behind and the promise of what can lie ahead.

The Lost City was unexpectedly brilliant. A big, relaxing, kick-back-and-enjoy movie, that is witty and charming, as it takes joy in not only riffing on ‘80s and ‘90s jungle adventures, but also sending-up artefact hunting stories and erotically-charged hero/heroine literature.

The cast are all excellently placed, with Daniel Radcliffe having a ball in the kind of role he does not get linked to all that often and Da’Vine Joy Randolph being great fun in her memorable supporting turn. Though the sparkling chemistry between Tatum and Bullock is what really makes the movie a joy and allows so much of the comedy to flourish. They are a double act who just click the first moment they are paired together, and that spark lights up the film. Even if a certain Brad-tastic A-Lister’s extended cameo turn steals many a scene, with a character you instantly crave more of in this adventurous, romantic comedy yarn.

This was just a great ride and I reckon the whole family will enjoy it too! Mind you, to that point, I am a little surprised (or maybe the word is impressed) that the film itself is a 12a. The ratings body, BBFC, often have itchy trigger fingers, and this one has a few saucy gags, and Channing also gets a bit cheeky - if you know what I mean!

Overall, this is all just a hoot, with far more going on than meets the eye. So, get cosy in your cinema seat, grab a drink and a popcorn and allow this great big box of fun to take you on a very worthwhile adventure. Oh, and do stay for a mid credits treat. You won’t regret it!