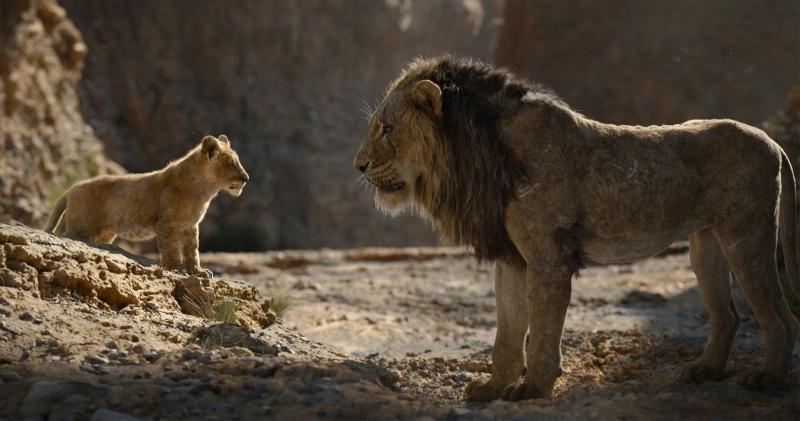 In a year that has already brought us Dumbo and Aladdin, audiences have certainly gotten used to seeing Disney animated classics remade in live-action form. Now it is the turn of Roger Allers and Rob Minkoff’s classic, as Iron Man director Jon Favreau brings The Lion King back to the big screen.

After a quarter of a century, The Lion King has become one of the best loved Disney classics, inspiring a string of home video sequels and a broadway show. The story is well known but for those few unfamiliar with it, the film is set in the African savanna, as joyful young lion cub - and heir to the kingdom of the pridelands - Simba just can’t wait to be king and is learning his responsibilities from his wise, caring and powerful father King Mufasa (James Earl Jones). However Mufasa’s deceitful and jealous brother Scar (Chiwetel Ejiofor) puts into play his plans for a deadly coup that sees him become king, and a scared Simba forced to run away. But, now as a grown lion, will Simba (Donald Glover) ever return to save his home from Scar’s tyrannical rule?

The Lion King is a story that still boasts a powerful roar and in this latest “live-action” adaptation, Favreau uses the same groundbreaking CGI he put to great use in his 2016 The Jungle Book film (still my choice as Disney’s best live-action update), for a spectacular retelling that closely follows the original film and could be this summer's biggest crowdpleaser.

Welcomely inter-cut by some moments of updated dialogue/humour (most of it absolutely spot on), and a horde of far more frightening Hyenas, this take does have fresh edges. In fact, after the introduction of beloved comedic duo and Simba’s Hakuna Matata pals Timone (Billy Eichner) and Pumbaa (Seth Rogen), the film enjoys tweaking even more bits of material and script but overall Favreau’s film is very dedicated to the original text, overlaying the timeless tale with realistic animal characters realised in a visually astounding way by the impressive technology.

This new The Lion King will probably not offer the harshest (and most vocal) of Disney’s critics a reason to change their view that the the industry giant is becoming increasingly “creatively bankrupt”. However, despite the fact Favreau’s film does not differentiate itself from the source material to the degree his Jungle Book did, The Lion King is still a hopeful, spiritual, ode to nature in all its savagery, bravery and beauty.

The Lion King is like watching a new concert by your favourite band or a classic stage show. Some members of the group may have changed and the experience may not be quite as original as it was the very first time but the technological spectacle has been upped impressively and they still get you on your feet with those hits!

I felt such a strong nostalgic rush hearing Lebo M’s opening vocals back in a cinematorium and seeing the visuals play out the stories events on the big screen. Back in 1994 The Lion King made memories that - 25 years later - still resonate and with this new film there is an opportunity to create new ones for many (now grown up) fans my age, many of whom are this time bringing their own young cubs to the cinema to witness Simba’s story. The circle of life is in full effect...and that is really what it’s all about.


Also by Jack Bottomley...
Review: Birds Of Prey And The Fantabulous Emancipation Of One Harley QuinnReview: CatsReview: CatsReview: The IrishmanReview: The Irishman
Yes, some things don’t quite excel with the same energy, as the film is more contained by its realistic approach and musical number “Be Prepared” is particularly more pulled back visually and not quite as all out as the iconic Jeremy Irons version but it is still well performed by Chiwetel Ejiofor, who harnesses a gravely imposing Shakespearean furry fury as the picture’s baddie Scar. Admittedly emotional ranges are limited to a degree by the photo-realism of the animals but there is a strong emotional connection obtained in a very different way, through the character’s genuine wildlife mannerisms, looks and movements. While the set pieces and cinematography still evokes the right feelings, the stampede sequence in particular still is heartbreaking to witness and the battles (most of which are extended) are frighteningly furious and epic in scale.

The timeless music endures, thanks to some effective tweaks by a returning Hans Zimmer, alongside original songwriters Elton John and Tim Rice, with Beyonce helping in the reworking of the tracks and a wisely chosen voice cast who give plenty of soul to the breathtaking imagery and music.

All the cast are well placed, with Beyonce Knowles-Carter as Simba’s grown-up childhood friend/love Nala and Donald Glover’s Simba making a strong central vocal act. While Alfre Woodard as Simba’s mother Sarabi helps give the character a bit more importance in this new film and the legendary James Earl Jones’ return as the voice of Mufasa is most welcome. Though the film’s strongest performances are probably Ejiofor’s Scar (who decides to amp up the horrors of the part and thus avoids competing with Irons’ more showstealingly wickedly devious take), John Oliver’s nattering Hornbill majordomo Zazu, Rogen’s lovable warthog Pumbaa and Eichner’s witty meerkat Timone.

In sticking closer to the original, Favreau, screenwriter Jeff Nathanson and the entire team, have been accused of playing it very safe but actually there is a real danger in walking close to the material, as you encourage a direct comparison between the two works.

This is not the original film but it is unmistakably made by people who loved it and I have no doubt that audiences will still feel the love tonight all these years later.