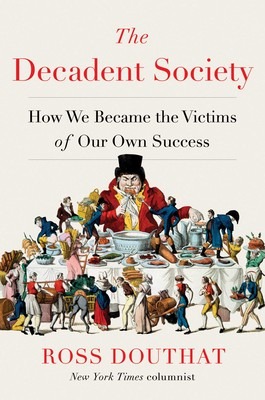 Ross Douthat’s The Decadent Society: How We Became Victims of Our Own Success by New York Times Columnist Ross Douthat is a thoroughly compelling read that dissects life as we know it, diagnosing all its flaws and providing rational and well-informed suggestions as to where, why and how it all went so very wrong.

Douthat’s style is informative but not didactic. He shares fact but doesn’t often voice opinion. The book, therefore, doesn’t read from a one-sided perspective: all options are laid bare and readers are left to form their own conclusions. It would, I believe, be hard to disagree categorically with the book’s main point, as the society that is discussed is exactly what we, residents of the West, witness on a daily basis.

The friendly, accessible writing style will also appeal to a wide audience. There might be sections that lose the reader - for me it was the economics - and whilst not patronising, the text is sufficiently straightforward, thought-provoking and captivating to compel the reader to keep turning the pages.

The gist of the book is that society as we know it is in a state of decadence. His definition is adapted and modified from that laid out by Jacque Barzun in his 2001 book, From Dawn to Decadence. Decadence, for Douthat, is:

"economic stagnation, institutional decay, and cultural and intellectual exhaustion at a high level of material prosperity and technological development."

Sound familiar? If it doesn’t resonate right now, have another think after finishing the book. For me, the more I read, the more I thought his opinion was right on the money.

Sometimes he appears to drift away from the central point to bemoan society in general. However, on return to the conclusion of each chapter, you begin to understand that nothing that has been said is superfluous. Life as we know it is relayed to us, using sociological, political and economic perspectives, but the subject is never dull. His discursive style strengthens the narrative’s accessibility; the book is like a jigsaw puzzle, each crucial piece playing a key role in linking the topics together.

In stating that there is no one single cause of societal decadence, Douthat covers chapter by chapter, an enormous amount of ground - his knowledge is astounding. From the roles of populism and nationalism and how they could but will not work, he explains every point, and describes how it fits the puzzle. For decadence, it seems, read stagnation and sclerosis. Humanity and all society are stuck in a rut. Life now is not what was imagined fifty years ago. Since the moon landings, society has begun an inevitable deceleration and decline. We live in a capitalist age of “let’s pretendism”: businesses that are about to turn a profit, technologies that are about to be developed. Now seems an age of anticipation, waiting on what is just round the corner – but really, what’s round the corner is nothing. 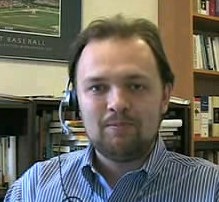 Ross Douthat
Douthat draws on a wealth of literary and academic, philosophical and journalistic work to cite sources in support of each theme. The section entitled “Waiting for the Barbarians” is opened with the 1904 eponymous verse by Greek poet C. P. Cavafy, and reference to the French writer Michel Houellebecq’s 2016 novel Soumission (Submission). The latter, which, Douthat argues, demonstrates “the actual dystopia is the contemporary West” is the story of a French election in which the leader of an (imagined) nascent Islamic party beats Marine Le Pen and begins the Islamization of French Society. The poem reflects how we now seem to live in unfulfilled anticipation of what is supposed to come next. The first chapter, “The Fourth World War That Wasn’t” discusses why the novel’s plot couldn’t yet be realised: “the form of Islam that could imaginably replace liberalism hasn’t been invented yet.” The role of Islam, China and Russia in humanity’s future is explored without overt criticism of their economies or societies. It is simply an explanation of how they might work, but in reality, probably wouldn’t work. Decadence is not limited to the Western world – the rest of the planet is just lagging behind.


Also by Caroline Spalding...
Review: Anyone For Edmund? By Simon EdgeA Tale Of Two Hulls: Writer Chris Speck And The Art Of The SeaA Withering Light: Brighton Rock By Graham GreeneThe Artistry Of Lancashire: Bonkers ClutterbucksChimeo Classics: Jimmy Eat World - 23
Decadence is explained through reproduction: declining birth rates and culture, the lack of original cinema in the past thirty years, the rehash of academic treatises, how the role of black TV stars in The Crosby Show era were more significant than those of Black Panther. Conservative writer, Mark Steyn, is quoted to support the theory of stagnation, saying how a time travelling visitor from 1890 would marvel at the difference on landing in 1950, but thereafter, would struggle to seriously distinguish between 1965 and 2015. A thought experiment by economist Robert Gordon is cited: in it, every digital advancement since 2002 is made, logically, to seem utterly superfluous compared to, say, the simple efficacy of running water, yet it is laughable how reliant we are on digital technology these days.

Douthat links all his themes elegantly, even exploring why decadence isn’t necessarily a bad thing, and by definition, doesn’t always lead to disaster. The book concludes by speculating what might break the stagnation, or sclerosis of the modern world. Examples are suggested, then are reasonably, intelligently unpicked. He is still the rational, highly intelligent journalist. His writing provokes thought; he isn’t highbrow and his criticism is saved for discussion of Donald Trump, although his faith in politics, politicians and political institutions appears altogether questionable.

Is it a depressing book? Possibly. But for me, a cynic, it is almost a reaffirmation in that it corroborates everything I already thought to be true. I joke about my attitude to life and humanity, how we are all doomed and humanity is generally despicable. Perhaps what got me hooked was that the opening pages of the introduction (as I interpret it) confirmed my belief that humanity is inherently lazy. Douthat suggests we can no longer innovate (read, we are now lazy) because all that is unattainable has been designated uninteresting, or not worth having anyway.

The role of the internet and technology plays an inevitably large part in Douthat’s thesis, but he skilfully challenges assumptions. Statistics confirm that the internet has actually reduced sexual violence as people can realise their nastiest tendencies online, through porn consumption rather than in reality. Douthat blames the internet in part for cultural stagnation: it is demand led – feeding people what they want in the here and now, things existing momentarily, click chasing demanding a minimum of thought or engagement. People want entertainment instantly, so the internet feeds them with banality. He also reminds us that the internet is not “a weapon of surveillance” used by larger forces, but is the surveillance monitor in its own right:

“Big Brother isn’t watching everyone because everyone is always watching each other”.

Disappointingly, the book, for me, ends on an utterly damp squib. It is not just that I fundamentally disagree with his conclusion; rather it is that I am disappointed that a person who has written a book full of arguments so justified by fact and reason can form a conclusion that comes down to a question of faith. If I had known the end from the outset, I probably would not have read it. However, by not reading it, I would have missed out on an utterly outstanding book.

Douthat is an exceptional writer; he can decode the speeches of Trump with great dexterity, he speaks plainly, compellingly. There are some minor criticisms, and of course, the ending, but I would unhesitatingly re-read the book. I’ve since read news stories and thought, ‘herein lies our decadence’, or ‘that’s exactly what Douthat was talking about…’ How you interpret the book will, I believe, be influenced by your own internal barometer, whether guided by pessimism, optimism, hopefulness or depression. My cynical interpretation almost justifies my disparaging view on humanity, but a kinder, more forgiving person might not be so critical – either way, this fabulous book deserves to be read, despite its conclusion.


The Decadent Society: How We Became the Victims of our Own Success by Ross Douthat is published by Simon & Schuster