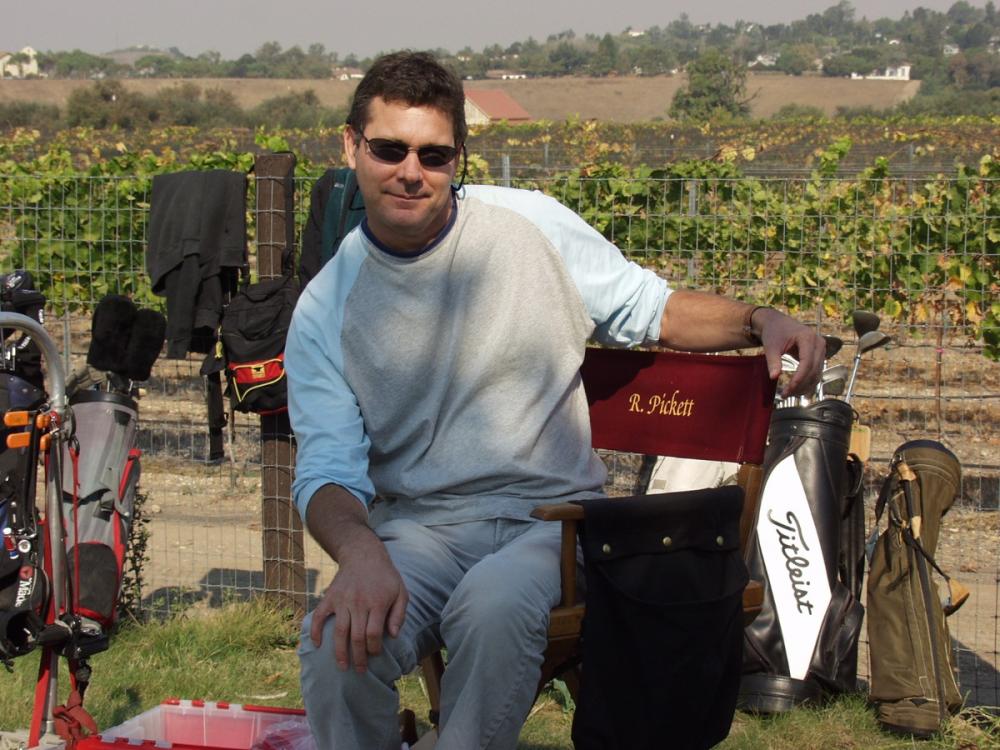 Rex Pickett
Sideways, written in 1999 by American novelist and film maker Rex Pickett, but not published until 2004, had a difficult birth. His first novel, La Purisima did not sell. After receiving eighteen rejections from publishers, Pickett’s literary agent pulled his second novel Sideways from submission. Twelve months after he had completed the manuscript, film director Alexander Payne bought the options for the book. Just four months before Payne released his film of the same title, the screenplay adapted from Pickett’s novel, a publisher did buy the book and it was released in 2004. The film was an instant success. The book has steadily developed a fan base, but still divides opinion. I’m in the fan category. I do believe Pickett is vulnerable to the charge of liking his purple prose almost as much as his narrator and protagonist likes Pinot Noir! That said, I consider it to be a quirky and seriously funny novel well deserving of a read.

If one compares the film to the book, it’s possible to describe the former as a carefully diluted version of the latter; an innocuous and aromatic bottle of Merlot as opposed to a heavily perfumed and far less quaffable Pinot Noir. Pickett suffuses his novel with the argot of the wine drinking cognoscenti and has his narrator speak in a hyperbolic lexicon as pretentious as it is at times flabby and determinedly florid. Whilst the dialogue is sharp and often witty, the language employed throughout, and the oenological focus, definitely polarise opinion on this one.

It’s like marmite, truffles and (sorry Rex) pungent cheese, it’s not going to appeal to everyone’s taste buds. Mine were tickled despite its flaws and far from dismissing the novel as owing more to a well-thumbed thesaurus than literary skill, I believe the book benefits from the very thing that its detractors criticise. By giving his narrator and chief protagonist a distinctive voice, Pickett immerses us in both the world of fine wine appreciation and the intellectually and emotionally damaged world of its central character. If you can find this voice amusing, the novel will deliver laughs, moments of real sadness and insight not to mention a cracking plot, witty dialogue and bags of well-crafted entertainment. Admittedly, it’s a big If, but one that, in my view, pays off for the reader.

At over 350 pages long, the novel’s plot has to cover some ground, and it does. Two friends with wildly pronounced differences in character and outlook called Miles and Jack, take a road trip to the Santa Ynez Valley a week before Jack’s forthcoming wedding. Miles, a recently divorced unpublished novelist and wine aficionado is taking his friend on a tasting tour to the heart of the Californian wine district. Jack, a charismatic ex football jock turned actor is along for the ride and intent on having one last fling before changing his priapic spots. Along the way the pair have a quixotic and hilarious set of encounters, misadventures, imbroglios and the odd existential crisis. Jack leads Miles into both comic and deeply troubling episodes and both characters are forced to confront their inner demons and character flaws as they tumble through their shared wine-soaked odyssey. 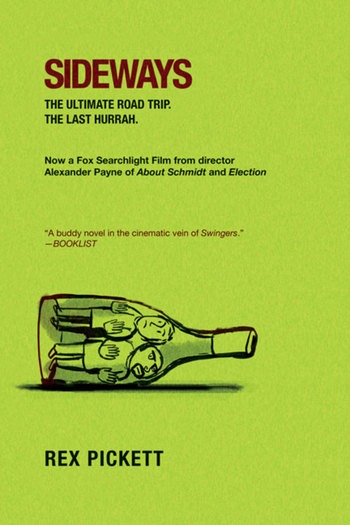 It’s fair to say that only Miles undergoes any serious personal development and equally true to say that for Jack the journey is circular. Miles returns to the departure point not rejuvenated or even transformed, but capable of transformation. His emotional and intellectual apparatus not fully recalibrated, but scrutinised and ready to heal. The shenanigans along the way are an admixture of raucous high jinks, personal breakdowns, tender encounters and comical mishaps. It’s a farce with moments of sublime insight into mid-life crisis as encountered by two lost souls, one as complex and troubled as the other is shallow and sexually predatory. The novel’s road trip structure allows Pickett to remove both characters from their norm and expose them to something more disruptive. With Bacchus as their muse, wine as their shared catalyst, and dysfunctional human relationships their common ground, the plot drives them and the reader through the book with gusto.

Thematically, Pickett explores friendship, human frailty, self-destructive cul-de-sacs, obsession, regret and the struggle to lead a balanced life. He also touches lightly on the reparative power of camaraderie and compassion, even showing us both the destructive and constructive effects of love. Wine and sexual coupling are the central tropes within which Pickett immerses his characters, obliging them into situations that expose their foibles and darker fault lines. Frustrated ambition and personal discontent lace these themes together and maintain the novel’s shape, without allowing it to become an amorphous mind-dump about male mid-life crisis. For me, Pickett keeps the novel moving along nicely and the occasional change in pace serves to accentuate his themes rather than blur them all together.

Wine, and specifically the Pinot Noir varietal, is a theme in its own right and defines the book throughout as both a causative agent and a metaphor for the careful viniculture required to produce a balanced and satisfying individual character. The novel’s title perhaps conveys this idea; in order for a wine to age nicely and not spoil due to oxidisation, the cork must remain wet and therefore the bottle laid down sideways. The bottle’s content should not be sour or vapid and must be treated with care in order to produce a balanced and satisfying wine. At the beginning of the novel, both Miles and Jack are corked, their characters tainted by imbalance and obsession. This care comes in the form of personal responsibility and the friendship and affection of and for others.

At the risk of wanton extrapolation and shockingly over-enthusiastic analysis, I found myself detecting a subtle whiff of the autobiographical as Miles and Jack reveal themselves to the reader. Both characters could well be authorial alter egos, although this is pure conjecture and probably erroneous. A bit like detecting notes of burnt caramel and toffee on the nose when tasting a wine, these aromas may not be present for anyone else, their olfactory senses picking up something entirely different! I suspect I could push this metaphor a tad further and suggest that the novel itself, like many others, will provoke a highly individual set of responses, with some detecting this and others that. To the criticism of excessive language and esoteric oenological focus, I propose only the subjective idiosyncrasies of the olfactory bulb and its literary equivalent.


Also by Paul Spalding-Mulcock...
'Mother Doesn't Do Maternal': The Smart Woman's Guide To Murder By Victoria DowdThe Fresh Delight of the Debut Novel'Do Not Believe Too Quickly': A Room Made Of Leaves By Kate GrenvilleWriting Into The Dark: Interview With Caoilinn HughesAt Close Range: Annie Proulx's Wyoming Stories And Novels
One of the joys of the novel for me is the way Pickett exploits both the dissimilarities and similarities of his two chief characters. Ostensibly, Miles and Jack could not be more different in both character and outlook. At first glance one seems to be an inverse image of the other. Miles is cerebral, erudite, socially awkward and frankly emotionally fragile. He is incapacitated by divorce, failure to secure a publishing deal for his torpid-sounding novel and plagued by self-recrimination and negativity. Jack on the other hand is self-confident, gregarious and habitually optimistic. He is animalistic, attractive, spontaneous and positive. An odd couple!

Pickett uses these points of divergence to propel his characters into comically fecund territory. He also explores their common ground to rich and often comic effect. Both lean on a crutch to navigate life. Miles, as a wine connoisseur, finds structure and passion by immersing himself in the sophisticated rituals and details of the winemaking and drinking world. Jack replaces meaningful human relationships and emotional sensitivity with sex and the spotlight of attention he receives professionally. Both characters need companionship and tolerance of their personalities and predilections. They both need to find balance, camaraderie and someone to share their passions with. What looked like an unlikely pairing actually turns out be a duo, if not in simpatico then in warm hearted harmony. Each is a foil for the other and Pickett does a good job of using this dynamic to give his characters a little depth and his book some balance. Vitally, liking either Jack or Miles does require the reader to cut them both a little slack!

Sideways is part of a trilogy, the other two novels being Vertical (2010) and Sideways 3 Chile (2015). I’ve not read either. The original is enough for me. So, a book that is able to provoke more than a few laughs, say something meaningful about friendship and self-discovery and deliver enough reader satisfaction to make the road trip worthwhile. Sideways, to borrow from Miles, is not a Grand Cru, it’s not even a Barolo or a first class Cabernet Sauvignon. It is however a refreshing, well made and very amusing Pinot Noir.

With that in mind, I recommend that you pour yourself a glass of it and enjoy!