Review: Not For All The Tea In China By Chris Burrows 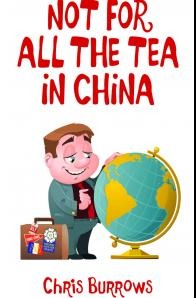 If you fancy a lighthearted, whimsical read, this is for you. Chris Burrows is a septuagenarian from Barnsley who has run his own business for sixteen years. In those years, he has travelled to all corners of the globe, buying and selling his wares, negotiating deals and experiencing a broad range of transport, accommodation and food. In this book, he reminisces about his encounters in a world outside of Yorkshire. He is a gentleman from a bygone era, amusing and self deprecating. I smiled at his description of himself as a ‘very large budgie on a very small swing’ as he perches on a stool (pun intended).

He writes in a naturalistic style, his own voice clearly evident in what is a very personal memoir. My first teaching job was in Barnsley and I lived in and around the town for a few years, so some of the intonation is very familiar. Intentionally or not, the nuances of the locals in a number of places he visits, is evident, too, not least Southern Ireland where the voices of his hosts are authentic in the cadence of their words. Just as clear is the fear he felt when visiting Northern Ireland in troubled times, and the indignation aroused when some of his fellow travellers, further afield, were impolite and disrespectful of their hosts as he tried to distance himself from their thoughtless behaviour.

Chris Burrows
The anecdotes are primarily intended to amuse and they are certainly lighthearted even if, to be fair, some would benefit from the rider ‘you had to be there’. Don’t be offended by references to race and religion. There is no offence meant and none to take. It is written with a refreshing freedom and naivety along with a clear message to ‘live and let live’. What is obvious is that none of this is made up. The author explains that he carried a Dictaphone with him to record things he saw and his reactions are real whether it’s his appreciation of the efforts of others, his shock at what some people think of as normal, the disbelief he feels witnessing the antics of some of his fellow human beings, or just his enjoyment of the harmless, inoffensive humour he finds wherever he can.

It’s all in here: the generosity of a Scandinavian Christmas; the need for a knife and fork in a Chinese restaurant; his naivety in going to a cinema in Denmark when he didn’t speak the language (he left early, eyes firmly front), and being kicked out of his hotel by the dictator of North Korea, Kim Jong himself (or at least his entourage), to cite but a few. Certainly, a broad range of experience.


Also by Artis-Ann ...
Review: Her Last Promise By Kathryn Hughes‘So Many Dead In The Ashes’ : Dust Off The Bones by Paul HowarthMelody Of Peace: The Electric By Tim MurgatroydHe Knows I Know He Knows: Cradle Song By Robert EdricThe Best And The Absolute Worst: The Dressmaker’s Secret By Lorna Cook
The reflective tone is emphasized by the amount of repetition; at times, Chris – I am loath to call him Burrows because he has become so familiar – seems to be speaking more to himself, unconscious of his reader. I would perhaps have liked fewer anecdotes and more detail and definitely some chapter headings, but this is a series of thumb nail sketches which you can pick up and put down at will and which will not tax the brain. There’s a place for all sorts of reading matter on the shelf.