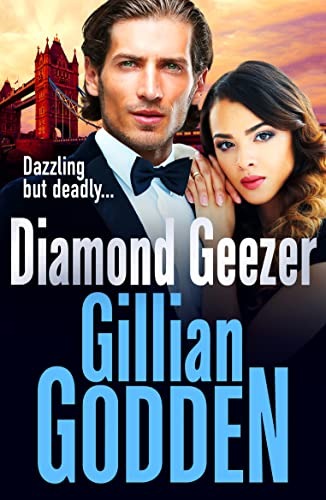 Diamond Geezer is not a title you would expect to transport you to a turf war in the tenements of Glasgow but then Nick Diamond is no ordinary chap.

A handsome, successful and charismatic lawyer with well-cut suits and plenty of silk shirts, he is admired, envied and feared in equal measure. He lives in Chelsea with his wife, Patsy. It’s a long, long way from the run down estate in Glasgow where lie his family roots. He commands respect from his fellows, but there are dangerous undertones, and Nick is a flawed character. In total contrast to his flamboyant and luxurious lifestyle, there lies a tough, mean streak. His Nana, down from Scotland for a surprise party, is not exactly the genial granny one might expect and her caustic tongue provides a little insight into what her doting grandson is really like.


A handsome, successful and charismatic lawyer with well-cut suits and plenty of silk shirts, he is admired, envied and feared in equal measure.
Meanwhile in Glasgow, Fin and Mrs Mack know what to do when a body falls from a balcony and lands on top of a parked car. The bullet hole in his forehead is not mentioned. The mess is quickly cleared up with no-one any the wiser – and the wisest don’t ask questions anyway. The Police are not welcome on this estate.

Steve comes out of prison; he’s served his time, having been set up by one of the barons, to take the rap for a break in, as a punishment for not following orders. He comes home and finds that in his absence, his wife has made ends meet for herself and their two daughters, in whatever way she needed to and still she owes money. She doesn’t share his zeal for a fresh, honest start; she knows the reality for people like them, living on their sordid estate in Glasgow. And it appears even the ‘Knitting Nanas’ who might be elderly with walking sticks and Zimmer frames, also know the score – and embrace it, if it helps eke out the pension. Who knew cuddly knitted toys could be worth so much?

It is survival of the fittest on the mean streets. Ruthless drug dealers use kids on bikes to deliver their wares and a takeaway delivery is far more than it seems. Everyone is vulnerable, however, no matter how high up the food chain. There is always someone bearing a grudge and the need to look over your shoulder is a permanent one. There’s plenty of community spirit, especially in Nan’s hip flask, as long as you keep yourself safe first and don’t upset the wrong people.


Ruthless drug dealers use kids on bikes to deliver their wares and a takeaway delivery is far more than it seems.
Midge (an accurate if not politically correct nickname) and Joe peddle misery from their mobile shop, giving new meaning to ‘pick and mix’ and credit comes at a high price. The Albanian ice cream sellers might not put a flake in a ‘98’ but they do fill the cone with a little something extra. Fatso Paul (he doesn’t like being called it to his face, understandably) is the Greek chef who now sells pizzas with a few special toppings for those who ask – and pay!

Whatever their line, however, they all fear ‘The Undertaker’, so called because much of his business is carried out in the local cemetery and most of his victims end up there. He runs this gangland through his foot soldiers on the ground and a seemingly endless supply of untraceable phones. He’s careful; no one can identify him and no-one dares to cross him. His partner, the objectionable Billy Burke, discovers first-hand what can happen – even a prison cell isn’t a safe haven from ‘The Undertaker’. Money laundering, drugs, rape and illegitimate offspring, affairs, murder and blackmail: what more could you ask? Oh yes, a gun toting Santa Claus just about fits the bill.


The Albanian ice cream sellers might not put a flake in a ‘98’ but they do fill the cone with a little something extra
A new community hall, provided by Nick, in memory of his father, seems to be just what the place needs. Nana is delighted. It’s what Nick needs, too, to further his business ventures, an excellent opportunity which provides the locals with somewhere to go and something to do but it also becomes the scene of the shocking ending which may just have opened the door to a sequel.

Diamond Geezer is published by Boldwood