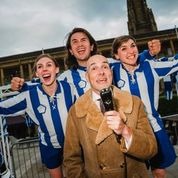 Elizabeth Robin, Thomas Cotran, Rachel Benson, James McLean
There are several natural symmetries in Mikron Theatre’s latest production, which opened against the Italianate backdrop of Halifax’s Piece Hall on Wednesday night. As we emerge from our own toxic ‘Annus Horribilis’, Atalanta Forever is an utterly persuasive reminder of another period of immense social turmoil in the immediate wake of the Great War.

Taking as its focus, the then, for many, reprehensible notion of ladies’ association football, Amanda Whittington’s fiercely intelligent play re-imagines the tortuous beginnings of Huddersfield’s own Atalanta AFC, the struggle to be accepted in a deeply paternalistic society, and posterity’s kick in the teeth for the good civic burghers and members of the establishment who tried to proscribe the women’s game by administrative sleight-of-hand.

Decked out in an ubiquity of blue and white stripes, and unfolding to a soundtrack of football chants and commentaries, there is never any doubt that the scene is set at the apogee of Huddersfield Town’s ascendancy in the early Twenties. Mirroring that success, in a land conspicuously ‘(un)fit for heroes’, middle class Miss Waller – played with the dramatic brio of a cross-dressing Margaret Rutherford by Thomas Cotran – leads her initially inept team towards their own apogee - the promise of victory against the leading lights of embryonic women’s football, ‘Dick Kerr’s Ladies’, with their demon centre forward, Lily Parr. 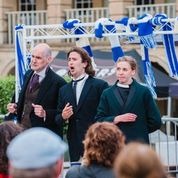 James McLean, Thomas Cotran, Elizabeth Robin
That her motley team hail from both sides of the divide is Miss Waller’s claim to a kind of class unanimity – the unifying factor is the love of football, conducted in the noble spirit of Classical Greece. Enacted in some fine exchanges between two team members – Rachel Benson and Elizabeth Robin give the divide a convincing and witty edge in both word and song – the warmth of naïve hope turns to an undermining of self-worth in the time it takes to blow a whistle.

The insinuation of theme is adroitly realised by the small but energetic ensemble – the rapid, and seamless interchange of portrayals eases the issues of the day into a figurative light, each represented in different characters who act almost as archetypes. The groundsman – played with blunt, flat-capped bombast by the versatile James McLean; the vicar, the doctor and the chair of the FA who oppose the ‘risible’ outrage of women’s football with hotwired cultural agendas unyielding to the prospect of change.

And above all, the tectonic social antagonisms of a time increasingly remote from us, but oddly familiar. Whittington’s perceptive recreation draws forth parallels through the foci of strife and struggle: conscientious objector against blind patriotism and an unsympathetic military; worker against mill owner during the General Strike; suffragettes against a male patriarchy. In the hands of Mikron’s skilled performers, it becomes increasingly easy to infer a bigger social picture, illustrated as it is by effervescent musical interludes, slapstick and dance.


Elizabeth Robin, Rachel Benson
Nor are we likely to forget some of the ‘on-point’ comic asides and hilarious vignettes, not least a sly nod to the Barbara Windsor exercise routine from Carry on Camping, and a tremendous turn from James McLean as a commentator whose mannered witticisms are delivered in the clipped inter-war RP of John Snagge, and cast football in a wider social context by association.

But this is a story of endurance and stoicism in the face of prejudice; some of Rachel Benson and Elizabeth Robin’s most affecting moments in the play are measured by relentless determination. The accompanying recording of a (very) recent international women’s match on loudspeakers, and the exponential growth of the game, are timely reminders that these early efforts to popularise the sport were not wasted.


Atalanta Forever was performed at Piece Hall, Halifax on 9 June, and tours until September.