Review: All The Sonnets Of Shakespeare - Edited By Paul Edmondson And Stanley Wells 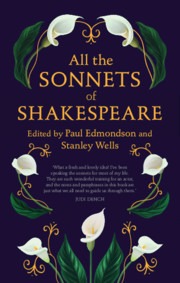 ‘I see men's judgments are a parcel of their fortunes; and things outward Do draw the inward quality after them, To suffer all alike’. A line from Antony and Cleopatra, Act 3, scene 13. Perhaps a useful signpost when interpreting Shakespeare’s sonnets ?

When the first national lockdown loomed large in the public consciousness, I had one dreaded fear - long queues outside local supermarkets. Even Prometheus was spared such a fate ! My solution was to arm myself with three precious books. Literature I could tuck into a back pocket and access instantly whilst enduring the capricious whims of fate and those in power.

Gloucester says, ‘As flies to wanton boys are we to th' gods. They kill us for their sport’. True, but they cannot dictate what we read. Armed with my books, I had allies to lean upon during trying times. I chose Rembrandt, Substance and Shadow, by Pascal Bonafoux, A Shakespeare Anthology, edited by G. F. Maine and Shakespeare’s Sonnets, edited and with an introduction by Martin Seymour-Smith (1963).

These little gems have the ineffable delight of sustaining pleasure from the briefest, most ephemeral of touches. They also have the delicious capacity to reward protracted scrutiny. Rather like savouring a rose, a pleasure offering the momentary transportation of an intoxicating scent, or if time permits, the elongated study of one of nature’s marvels. In any event, the Bard’s sonnets would ameliorate the agony of joining a prosaic can-can upon the acquisition of toilet roll and bread.

My ancient copies of all three works had distilled their wisdom unchallenged for well over three decades. My allies were trusted, venerated and accorded the status of irrefutable joys. All the Sonnets of Shakespeare, edited by Paul Edmondson and Stanley Wells, was recently published by Cambridge University Press…has retired all but the Bonafoux. Finally, I have one volume with which to brace myself against the woes of the latest lockdown, the soul-atrophying grocery queues and barbarous nature of life per se.

The provenance of the editors is comforting. Edmondson is Head of Research and Knowledge Director of the Stratford-upon-Avon Poetry Festival for the Shakespeare Birthplace Trust. His back catalogue is scholastically unimpeachable. Professor Sir Stanley Wells is Honorary President of the Shakespeare Birthplace Trust and for over twenty years has been the co-editor of The Cambridge Companion to Shakespeare on Stage, and The New Cambridge Companion to Shakespeare. He is also the general editor of the Oxford and Penguin editions of Shakespeare. Their new anthology is steeped in academic credibility, assiduous attention to empirical fact, and arguably beyond the fey complaint of being yet another handsomely bound version of what has gone before. In short, we are in the hands of experts, as passionate as they are erudite.

I won’t dwell on the literary history of the sonnet form. Where I mean to excite is in the stressing of the originality of Messrs Edmondson and Wells’ unique presentation of material we all hold dear. For most of us, the Sonnets represent 154 poems published in 1609 under the title, Shakespeare’s Sonnets ; Never before Imprinted. However, the sonnets included in this sacrosanct traditional anthology represent only an incomplete presentation of the Bard’s use of this exquisite form.

The first sonnets in the familiar fourteen-line form were written by Italian poets such as Dante Alighieri (c.1265-1321) and Francesco Petrarch (1304-1374). Most were secular love poems, but could also be religious in tone and subject matter. However, Shakespeare being conspicuously unusual, took the form and gave it an entirely new, intrinsically personal function. 1591 saw a vogue for the composition and publication of sequences of interrelated sonnets, a trend initiated by the posthumous publication in that year of Sir Philip Sidney’s Astrophel and Stella, a sonnet sequence containing 108 such forms and eleven songs. Nineteen such collections appeared between then and 1597, before the vogue petered out. Shakespeare wrote most of his non-dramatic sonnets during this period. Edmondson and Wells believe that Shakespeare was writing his material as the consequence of a ‘self-generated creative impulse, or from the desire to communicate privately in poetic form and occasionally for commission’.

This is where things become interesting. Our editors tell us that, the order in which the sonnets were first printed in 1609 is not the order in which Shakespeare wrote them’. The 154 sonnets we all know and adore are merely a somewhat random amalgam of his musings and do not include the sonnets appearing in his canonical works. What Edmondson and Wells have done is both groundbreaking and profoundly significant. They have produced the first ever collection of the Bard’s sonnets in chronological order and included all such poetic forms from his plays, to create something entirely new and scintillating. 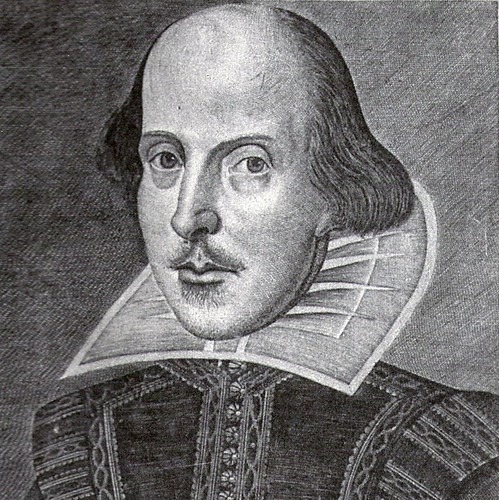 William Shakespeare
This ‘chronological approach’ reveals a radically new way of engaging with the sonnets themselves. ‘We believe that many of Shakespeare’s Sonnets are deeply personal poems, written out of Shakespeare’s own experience...Reading Shakespeare’s Sonnets can intermittently seem like encountering miniaturised dispatches from life turned into poetry: the poet’s relationships, inner turmoil, feelings of morality, regret, self-loathing, guilt, but also his joys and gratitude. But rather than turning these elements into an historical, autobiographical narrative, Shakespeare’s Sonnets can be read for traces of his personality, as though the poems were his emotional, psychological, and spiritual memoir, in part made up of his address to other people, in part his own soliloquies played out primarily for himself’.

Over the last 250 years, scholars and the general public have been largely influenced by Edmond Malone, (1741-1812). We have attempted to find the real personages causatively articulating the sonnets. We have translated the autobiographical feel of the sonnets into the belief that they are literally and exclusively biographical. We have attempted to match what is said within these succinct jewels to the known life of the man who wrote them. By arranging the Sonnets in pure scholastically verified form, Edmondson and Wells are refuting the ‘biographical assumptions’ which prevail and give us a new perspective on this canon. Though deeply personal musings, they are not necessarily addressed to specific significant parties or indeed reflective of the events of Shakespeare’s existence.

David Schalkwyk described a sentiment in the 1980s of ‘revulsion against Biography’, however Malone’s influence remained. The authors of this explosive new work tell us, ‘They are present whenever a critic refers to, “the first 126 sonnets” addressed to the “the Young Man” or “Fair Youth”, to “the Rival Poet” (in reference to Sonnets 78-86), and “the Dark Lady”, often in reference to Sonnets 127-140. It is time for readings and studies of the Sonnets to leave behind these biographical tropes. In contrast, our chronological approach enhances understanding of Shakespeare as a developing writer of sonnets and challenges the biographical assumptions and expectations that we as readers might take with us.’

The key message of this impressive scholastic research is that, ‘A chronological ordering frustrates attempts to assume and impose a biographical narrative, ( we hope ) defamiliarising the poems and presenting them afresh’. We are being invited to engage without assumptions and without the invidious temptation to interpret through the prism of received understandings about the poet and his relationships.

We currently believe that of the 154 sonnets published in 1609, those numbered 127 and beyond are in fact the earliest composed. Sonnets 1-60 were composed at least five years later and Sonnets 104-126 are amongst the last Shakespeare wrote. So, Shakespeare experimented with and perfected the Sonnet form from 1582 to 1613 and they inevitably reflect his journey both artistically and his emotional and intellectual evolution. In short, over a thirty year period, the Shakespeare who began the Sonnets was not the same man who completed them. Much like Montaigne, it seems that Shakespeare poured his soul into his literature, and the sonnets should best be understood as articulations of his soul, not the reflections or refractions of his life or the people in it.

Our authors conclude their engaging Introduction with the following thoughts: ‘We hope the reader will be as fascinated as we are to read all the sonnets of Shakespeare in an approximate order of their composition, and without the over-deterministic biographical narratives of the past’.

So, we have a never before published chronological anthology of the Bard’s sonnets, drawn from the 1609 version, but embellished with all the sonnets penned in his various plays, all presented in the order in which they were created. We have studiously researched ‘Literal Paraphrases’ to help interpret both the lexicon and the meaning of each sonnet. Throughout, the book wears its authors’ learning lightly, but their rigour is never in doubt.

Like Wordsworth and Tennyson, we too can engage with the sonnets and in so doing perhaps get to know their author. However, thanks to this wonderful new publication, the modern reader can experience all of the Bard’s fourteen line delights in one volume. We can do so for the first time in the order in which they were written and benefit from the interdependence of each poem, whilst seeing them in their unadulterated, homogenous form.

So, whether dipping in for a brief encounter or wanting to fully immerse oneself in the entire Sonnet canon, with scholarly explication and guidance, All the Sonnets of Shakespeare is a one volume tour de force. 400 years after his death, Edmondson and Wells have breathed new life into our engagement with his poetic output and a revised understanding of the man, his motives and his responses to creative muses.

Whilst I will always cherish my copy of The Sonnets as edited by Seymour-Smith, Edmondson and Wells have given me a new perspective on old friends. I strongly recommend grabbing a copy of their book and rediscovering the Sonnets for yourself ! The casual reader will be both enlightened and entertained and the scholar will be academically stimulated. Above all, any reader will be happy to own this wonderful book…reassured to know it is always on hand, regardless of what ‘The slings and arrows of outrageous fortune’ may throw their way !

All the Sonnets of Shakespeare is published by Cambridge University Press.


Also by Paul Spalding-Mulcock...
‘Fate Brings People Together No Matter How Far Apart They May Be’: We Are Animals By Tim EwinsReview: The Assassin’s Cloak – An Anthology Of The World’s Greatest Diarists Edited By Irene And Alan Taylor'We Choose How We Treat Each Other' : People Like Us – Louise Fein'The Uncanny Power Of Repression': The Haunting Of Alma Fielding By Kate SummerscaleAuthenticity Is Its Own Reward: Interview With Kirsten Hesketh, Author Of Another Us