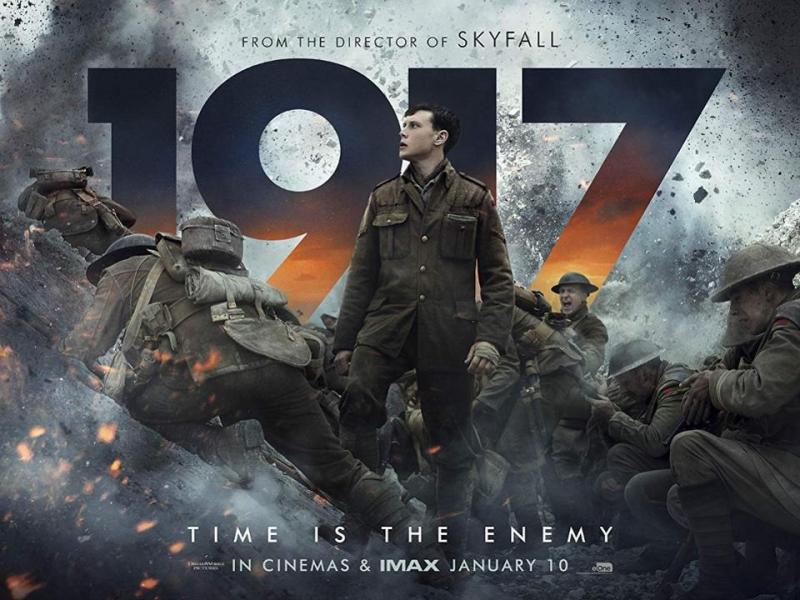 Sam Mendes’ strange, magnificent re-imagining of a Great War odyssey holds several moments of real beauty in sharp relief. And counter-intuitive though they may appear in the context of the Flanders charnel house, such moments enhance the viewer impression as magically as birdsong in darkness. Emerging from a broken copse of shattered stumps and silence, the film’s two main protagonists chance upon an enclosed cherry orchard, whose trees are cut down but continue to flower. ‘Will they die?’, asks one of the soldiers. ‘No – they’ll grow again’.

A metaphor for continuity in a place of overwhelming necrosis, this singularly beautiful image is one of several that thread Mendes’ narrative in a film which is both stylised and resolutely symbolic. That the cherry blossom re-appearing later in a riverine eddy is cross-hatched with the river’s ‘blossoming’ of a ghost town’s murdered inhabitants, is a characteristic of the director’s eye for inference. The resilient waters bear the dead as though on an aqueous bier, where elsewhere the trenches and shell-holes consume and transubstantiate the bodies of the fallen in sarcophagi of mud. But the brutalities of war are not overridden in a melange of philosophical enquiry; we remain trapped in a terrible reality. 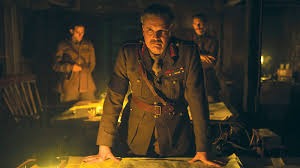 Colin Firth
The story’s conceit is simple, and breathtakingly effective. A General, played with steely detachment in a (very) brief cameo by Colin Firth, orders two Lance Corporals to follow a route between Front Lines which dissolve in an unending process of attack and retreat, to the specific point where two beleaguered battalions of Devons are poised to make an attack on the enemy. The regimental Colonel (Benedict Cumberbatch) is unaware that the Germans are prepared for them, and the soldiers’ orders are to demand that he stand his men down, in order to avoid the inevitable slaughter. The under and overground odyssey must be undertaken before dawn the next day, when the Devons are due to go over the top. Learning that his brother is an imperilled Lieutenant in the Devonian line gives Lance Corporal Tom Blake (Dean-Charles Chapman) the engine of impetus.

And here, in the appearance of a single camera take, shot from behind and in front of the two – the other, Schofield, is played with understated sympathy by George MacKay – unfolds a journey of astonishing visual potency. Initially filmed face-on, the viewer witnesses a gradual descent as the trench walls rise to engulf the soldiers in an increasingly murky light. In a film which wears referentiality like a badge of concealed erudition, the ‘fall’ bears the weight of katabatic suggestion: the landscape tableaux depicted are fast-moving infernal wastelands as distinct and inexorable as Dante’s Circles of Hell, their incumbents fixed in rictuses of death - hanging in barbed wire, trodden underfoot, perched bolt upright as though in the manner of oblation or punishment. The, by turns, morose, thrilling and lambent soundscape, created with great insight by Thomas Newman, signals the ‘pilgrims’ way, infuses the apparatus of war with precisely-judged measures of foreboding.

The brute indifference that Blake and Schofield encounter en passant is approximal to the insensate otherness of Dante’s wraiths; the art of endurance can be neither empathic nor accommodating. The trench ‘guides’ through this starkly-realised Hell yield relief only insofar as survival is not compromised: Andrew Scott’s turn as a wit’s-ended interpreter of madness is a masterclass in gallows sardonic, and is as insane, in a different sense, as Colonel Mackenzie, who, in Cumberbatch’s brief reading, is the essence of laconic derision. It is to these, and to the vigorously antagonistic presence of German soldiers – they are begetters of explosive trip-wires and unexpected knives to the abdomen – that we may ascribe the film’s ‘emotional inertia’, if the Telegraph’s flip assessment is accurate. And if it is, it would be surprising if this most brutal of all wars didn’t rip the heart out of filmic depiction. 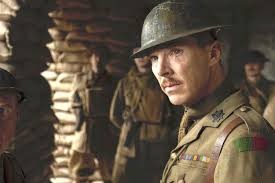 Benedict Cumberbatch
Fellow-feeling, though mostly dimmer than a Toc-H lamp, is eloquently manifested in the slow-burning relationship between Blake and Schofield, whose drive strengthens consanguineously, and re-doubles in the latter as the former is stabbed by the downed German airman he is seeking to help, in one of the film’s most poignant sequences. Insinuated, almost poetically, in a landscape in crisis, the appearance of several benign figures lights a celestial lamp in this Inferno: Mark Strong’s Captain Smith is a rare benevolent ‘guide’ through a turgid, changeful landscape.

The film’s simple timeline is surreally illustrated in chance moments and strange meetings – terrain radically transforms at every turn, figures materialise like apparitions in darkness. Roger Deakins’ cinematography is apocalyptic in scale: a febrile distortion of perception, his approach is near Sublime in evocative realisation. The shattered French town, backlit by a furnace of night sky is no less hypnotic, or embellished, than Philip de Loutherbourg’s steroidal pictorial microcosm of the early Industrial Revolution, ‘Coalbrookdale’. And it is here that the surviving Schofield is impelled, and where, by dint of falling through a cellar door to avoid a following German soldier, he meets a girl (Claire Duburcq) with an orphaned baby, holed up, enduring. The obscurity of circumstance yields its own serendipitous representation here and elsewhere in Mendes’ otherwise unrelentingly challenging narrative: the brief tender exchange is an hiatus of calm which presages the film’s final revelation, that Lance Corporal Schofield himself has two young daughters in England.

1917 is Sam Mendes’ film: with hands on three tillers – he is Director, Producer and co-Writer - his artistic control and sense of direction are palpable throughout. The film’s story was relayed to him by his own grandfather who served in the war, and the personal dimension shadows a stylised, and in places clinically-observed, battlefield like a corrupted lung. If we were to remove references subliminal and actual - from Divine Comedy and Odyssey, to Apocalypse Now and its parent text Heart of Darkness, to the harrowing Russian masterpiece Come and See - images which mark the film's unique integrity would still linger in the memory, and would sustain. Emerging, half drowned, from the waters of a river outside the deserted town, Schofield is immediately assailed by the solo voice of a soldier of the Devons, singing the gospel/hymn ‘Wayfaring Stranger’ distantly through trees. Surrounded by his seated pals, the soft voice a whisper in the breeze, his plaintive tones foreshadow the forthcoming attack in words of acceptance and redemption.