Return Of The Troubadour: Simon Armitage At The Ilkley Literature Festival

Simon Armitage
Harold Wilson’s first visit to Downing Street as a child prompted the un-childlike, and deeply precocious, assertion that he would one day grow up to be Prime Minister. Is it likely that it ever occurred to Simon Armitage, born just a few miles further down Huddersfield’s Manchester Road, that he would one day ascend to the Oxford Professorship of Poetry, let alone the dizzy heights of Laureate?

Probably not, and in a very profound sense, it is not in the nature of this philosophical, introspective poet to aspire to anything beyond the satisfaction of well-turned verse, and to find a mirror to his contemplation in a hugely eclectic audience whose demographic accommodates GCSE students alongside septuagenarian retirees. Refreshing, in fact, to find a poet of working class origins receiving the accolade entirely on sustained merit, for Armitage has been creating poetry of the highest quality for more than three decades. Accessible in the best sense, his poems refuse to sacrifice profundity on the altar of the banal: they are recognisable, but they also open windows on broader landscapes of interpretation, leaving the reader, often, with something akin to the enduring savour of a found sweet.

Armitage’s journey, like the incumbents of Larkin’s Arundel tomb, has been ‘stationary’ and ‘supine’, in that his ascent has been achieved whilst rooted to the spot, in both literal and figurative terms. In a domiciliary sense at least, he has never strayed more than a stone’s throw from home in Marsden, and his subject is the world, perceived through a glass of local apprehension.

This much was vouchsafed, and reinforced, in his welcome return to the King’s Hall in Ilkley on Friday. Succeeding volumes of his poetry – his latest, Sandettie Light Vessel Automatic, was mined liberally here – remain paradigmatically faithful to his métier, whether describing the possibilities of school memory in the poem ‘Gravity’, or unlocking the doors of nuance to open onto landscapes which are recognisable but take on renewed, sometimes left-field, vigour in Armitage’s elastically-persuasive use of metaphor.

Significantly, where he breaks from the local to the unchartered territories of his ‘Troubadour’ walk on the north coast of the south western peninsula, his prose lexis becomes conditional, wary, as unanchored as the treacherous crossing of the Hayle estuary in Cornwall, which, in turn, leads to a wider, semi-mythical consideration of those obliged to cross the bar in previous incarnations. Even his undertaking of the Pennine Way, paying his way with ‘performances’ on the hoof, provokes residual disharmony, a sense of fatigue mixed with anxiety, whose only true emollient is the road home. 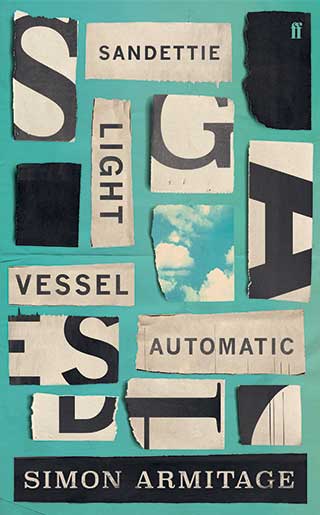 But Armitage wears a natural hesitance lightly. He has grown in stature in direct proportion to the increase in his public profile. His delivery is well-wrought, measured, and deeply effective, no more so than when, like a laconic comedian, he employs deafening pauses, or punctuates his delivery with bon mots and killing witticisms. Or, elsewhere, subverts expectation with a counter-intuitive, but eloquent reversal of conventional ways of seeing. Harnessing the fine poem ‘Gymnasium’ for the purposes of establishing a sense of isolate foreboding amongst the inventories of gym accoutrements, the poet successfully invests an entirely inanimate tableau with a languid enervation.

For Armitage, the potential for suggestion inheres to the objects which surround us so that mood is a condition of our intuitive reckoning of the furniture of our own lives. Armitage doesn’t stroll around manicured parkland, peer up at one of his own poems emblazoned on the end of a Sheffield University building, or inspect the mutable power of a verse-embossed Stanza Stone, without reflecting on the irony of the poet’s disposition. All featured at length in his autobiographical amble around Yorkshire’s divertissements, and at King’s Hall we learned that Sheffield Council’s planning department initially refused to allow the erection of Armitage’s poem on the grounds that someone might read it.

The poet’s return to the Yorkshire Sculpture Park in 2018 to compose forty poems in commemoration of the park’s forty year tenure resulted in the Flit collection, which offers surprises as it also pays sincere homage to Bretton’s beautiful insinuation of Art in terrain. But it is no surprise to find, in amongst the disparate reflections, an overheard conversation between two women before an entirely serious installation in the park’s Bothy Gallery, going something like: ‘Smoked haddock we had. Which was sleazy on a first date’.

This, in formal poetic terms, is a ‘Found’ poem, nicked randomly from eavesdropped dialogue, and it yields a neat illustration of Armitage’s skill at rendering the quotidian in an unlikely temple of Art. Evidence, if evidence were needed so many years into a meteoric career trajectory, that irony is the hinge upon which Simon Armitage’s work hangs.

Long may his association with the Ilkley Literature Festival continue.


Simon Armitage was at the King’s Hall, Ilkley on Friday 4th October.