Pre-Raphaelite Knights: Reinventing The Medieval World At The Bowes Museum

This exhibition is all about colour, beauty achieved through attention to detail, and above all it asks the viewer to imagine what life was like if you had lived in a mythical world full of legends. It features some of the masters of the Pre-Raphaelite art movement: John Everett Millais, Dante Gabriel Rossetti, Sir Edward Burne-Jones and William Holman Hunt. These artists and their colleagues were controversial. They prompted a huge debate because they believed art should, first and foremost, represent reality and that 'sugar coating' had no place in art.

Pre-Raphaelite is the name adopted by Brotherhood of mid-nineteenth century British artists founded in September 1848. Their mission was to return to the style of medieval and early Renaissance painting. They were vehemently opposed to the Royal Academy's promotion of the Renaissance master Raphael. They were also against what they saw as the frivolity of the widely accepted genre painting of the time. 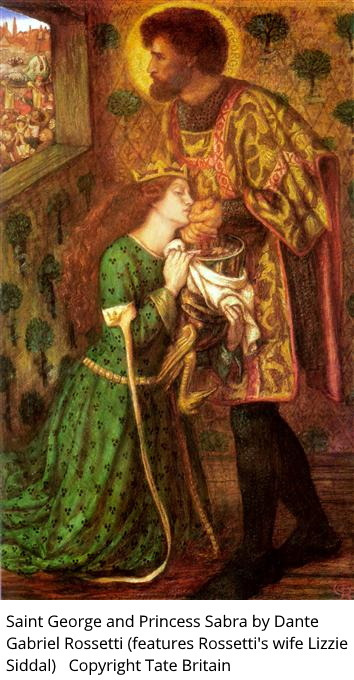 The Pre-Raphaelite painters were all about brilliant colour, simplicity of line, and attention to detail. They endeavoured to capture every minute detail. They firmly rejected the formality of Raphael's work. They wished to revert back to image making as they imagined it in the medieval period. In short the Pre-Raphaelites sought to achieve the maximum realism through beautiful and simple images. As you walk round the exhibition you can be the judge of whether they achieved their goals. Whatever conclusion you reach, it will not be lost on you, that without doubt, they grab the viewers' attention. You will likely agree that they achieved their main objective, which was to depict the social issues of the day in a wholly uncomplicated realistic manner.

You will see colourful works depicting chivalry, femininity, and national identity. Some of their works created quite a stir at the time, particularly in their treatment of sacred themes. Other subjects were also controversial. An example of this, and on show in the exhibition, is The Knight Errant which was Millais's first and only attempt at painting the female nude. The critical reviews of the painting were mixed, and most focussed on his treatment of the nude woman. You are now able to judge for yourself, from a 21st century perspective, whether the damning reception of the work by some critics was justified.

Mythology is front and centre in this exhibition. You will see Joan of Arc, King Arthur and the Knights of the Round Table, and of course for good measure St George and the Dragon.

Included in the exhibition is a watercolour painting on paper by Dante Gabriel Rossetti entitled St George and Princess Sabra (1862). It is a supreme work, and we would suggest that it is worth pausing to take in the scene. This is a truly poignant work as it centres on Princess Sabra after the death of the dragon. Princess Sabra, whose life St George had just saved, was modelled on Rossetti's own wife Lizzie Siddal. Rossetti had only just married Lizzie in 1860, and she was to take her own life from an overdose of laudanum only days after modelling for this painting. One is reminded of the moving lines of Dante's sister Christina Rossetti's poem 'Remember':


"Remember me when I am gone away,
Gone far away into the silent land;
When you can no more hold me by the hand,
Nor I half turn to go yet turning stay."

Dr Howard Coutts, Curator at The Bowes Museum, said: "This exhibition is a celebration of how the Victorians imagined the Medieval period to be and the works on show highlight their reinterpretation of it, with beautiful fanciful images of romance and heroism. It's also lovely that one of the paintings is returning to the Museum almost 100 years to the day it was last loaned here, The Knight Errant (1870), by John Everett Millais from the Tate."

This superbly conceived exhibition provides a wonderful insight into that debate, and should not be missed.

Oh yes, and once you have seen the Pre-Raphaelite exhibition, we strongly suggest that you allow time to see the superb works in the permanent collection. Then if by the time you finish your visit, you have not formed a final viewpoint on the work of the Pre-Raphaelites, then at least you will in all likelihood concluded that The Bowes Museum, is indeed one of the 'jewels of the North'.

This exhibition is being supported by The Albert Dawson Educational Trust, and is organised by the Bowes Museum which was created over 100 years ago by John and Joséphine Bowes. They constructed a truly magnificent building to house perhaps one of the greatest collections of fine arts in the North of England. Since 2005 significant improvements have been made to The Bowes Museum.