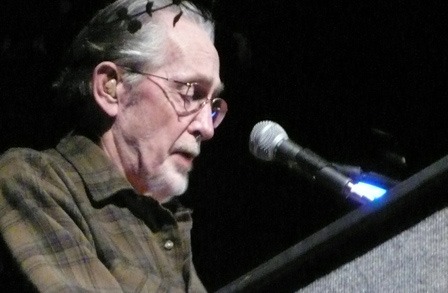 The Church, like a wreck blown ashore
from the Middle Ages
battering on a shoal at Finisterre...

The seams have opened,
and the sea, like a luminous window
falling away, flashes briefly
with ikons, chalices, gold candlesticks.

Angels and saints, their faces
crusted with salt,
draw near to the flooded railing.
They try to sing – the wind,
full of a wintry fervour,
whips the kyries from broken spars.

And the figurehead on a cross
has never moved...

A couch mourns in the littered shallows;
Unwieldy shapes, driftwood and sea-coal,
groan and struggle to their feet,
survivors from a shipwreck of souls.

Virginian poet John Haines’ beautiful and lyrical ‘The wreck’ ebbs and flows in the tide like the flotsam it describes. A close observer of oceanic shifts, and a diviner of metaphor in the deep, Haines scrimshaws a poem of extraordinary breadth out of the driftwood of suggestion. And if it is too easy to conclude that his lens was coloured by his US naval experience, then the fashioning of highly visual imagery, and chiaroscuro moments of concealment/revelation in the undercurrent, look to indicate an imagination informed by memory of ‘the sea, like a luminous window / falling away’.

Nestled amongst the waves is a Church as glittering and evanescent as its own history. For here is a wreck that is literal and figurative. Seabed-bound, redundant, Haines’ ambivalence as to an institution whose blandishments are seductive but whose usefulness is circumscribed by knowledge and experience, is wrought in gorgeously sibilant and alliterative language. The inventory of artefacts – ‘ikons, chalices, gold candlesticks’ – wink as if perceived through an aqueous Hockney blue, but it is significant that they are as locked in narcotic repose as the voices of those acolytes who would hymn their devotion in song. Instead, their kyries are lost to the powerful wintry wind.

And if the ship of the Church’s prow, its buttress Cross, remains as fixed in historical view as the resonant symbol of the crucifixion, it heads a carcass as fractured and broken as a misinterpreted message.


‘The wreck’ is taken from Poetry of the Committed Individual – A Stand Anthology Edited by Jon Silkin, and was published by Penguin Books