Poem Of The Week: 'Smuts, Pobs And Goody' By The Irish Health & Homes Creative Writers

1957, Tallaghan Bawn Geesala, Mayo. By the following year, everybody in this photograph had emigrated.
Smuts, Pobs and Goody

I start remembering and this white sheet soon peppers with
words, some nearly forgotten, like “winter hedge”, our old
clothes horse: on its side, it made a great den.
If you were off sick from school that was another one for
your food: “pobs” was the Leeds word for it, bread and milk,
maybe with a stir of sugar; we knew it in Ireland
as “goody”. Never heard either word elsewhere since.

Maybe it’s a cliché to suggest that a life-affirming eloquence attaches itself to the Irish diaspora, wherever it has rooted. But where elegy naturally inheres to a folk tradition which connects individuals of sometimes river-deep, sometimes assumed, consanguinity – music and words are the antennae through which the blood and joy of Irish memory is transmitted – we find brute labour animated in the lithe fingers of a fiddle-player, carnival in the boozers, and poetry in the unsteady midden. The brilliant ‘contagion’, the lachrymal emotion and the finely-tuned sense of beauty, are highly strung, and we should listen to the plangent rhythms. 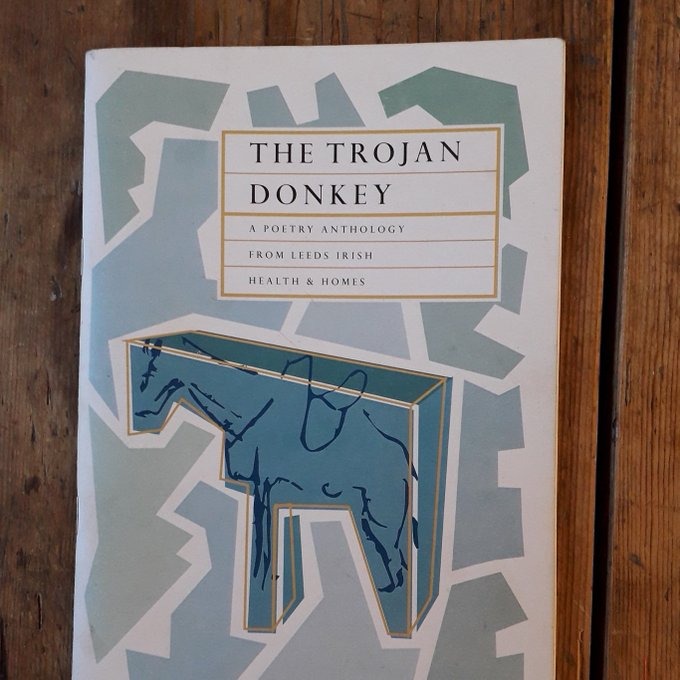 Never more so than in a post-war Leeds which supervised, assimilated, and tried to take the piss out of, a whole generation of immigrants. Words are the ex-pat’s argot. The boundlessly loquacious builders of roads, be-muscled and supposedly intemperate, helped build the city that most of us now know, and helped express ancient longings and ancient connections through music in the tiled alehouses afterwards. Words and easy lyricism were the best defence against a prejudice as thick-set and dull as the mortar which binds the walls of Leeds.

Some of the best poems open a window on a past most of us have forgotten; they let in air and light, and sometimes the grime and smells of a different time. In ‘Smuts, Pobs and Goody’ we have a collective endeavour, a poem constructed by the Irish creative writers at the Montague Burton Centre, and now a part of the Trojan Donkey anthology, from which it is taken. The writers are re-rehearsing a sense of their own history through the observed detail, the lingua franca, of what was then an entirely new terrain. And it is instructive to reflect on what they have left behind by contrast with the visible privation of their new home. The ubiquitous ‘smuts’ of a coal-fired industrial heartland are an unreal phenomenon to those who are accustomed to the intermittent rain and sunshine of Ireland’s West coast. They hang their washing out in despite, entirely oblivious to the mucky fog and chronic air pollution which give another definition of ‘contagion’, the peppering of ash alien to the ozone-clear skies of an old home over the water.


'Box' Player in a Leeds pub.
it is in the unprepossessing landscape of Leeds that the poets’, the witnesses, discover the irony of words, a different kind of peppering on a white ‘sheet’. Words that describe a confraternity of endurance and yield suggestions of hardship in different vernaculars. The ‘goody’, the milk and bread of a sick child’s comfort is re-learned as ‘pob’ in Yorkshire, but the poverty of the labouring classes resonates on both sides of the Irish Sea.

Through the journey of a metaphor, the poets’ are relating the beginnings of a process of painful assimilation, where a sense of identity will remain inviolate because the language in which the poem is conceived distinguishes a common inheritance. There is a wonderful truth to this snapshot of the past.

For further reading, and a fascinating recent take on the second-generation Irish experience, we recommend:

Photos 1 & 3 are taken from:
Róisín Bán: The Irish Diaspora in Leeds by Corinne Silva and Brendan McGowan, and published by Irish Health & Homes