Poem Of The Week: 'London' By William Blake 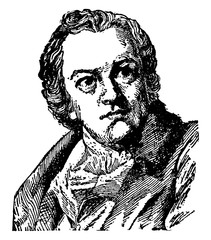 William Blake
It is difficult, when reading William Blake’s appalled vision of the London of 1794, to remove an image of Hogarth’s brutal satirical picture, ‘Gin Lane’, from the mind’s eye. A metropolis in turgid flux, the city here wears the clothing of despair, ignominy and resentment as transparently as a gin-soaked mother careless of the fate of her child. An approximation of a contemporary reality of terrible endurance for many, it is an undiluted image of hell.

I wander thro' each charter'd street,
Near where the charter'd Thames does flow.
And mark in every face I meet
Marks of weakness, marks of woe.

In every cry of every Man,
In every Infants cry of fear,
In every voice: in every ban,
The mind-forg'd manacles I hear

How the Chimney-sweepers cry
Every blackning Church appalls,
And the hapless Soldiers sigh
Runs in blood down Palace walls.

But most thro' midnight streets I hear
How the youthful Harlots curse
Blasts the new-born Infants tear
And blights with plagues the Marriage hearse. 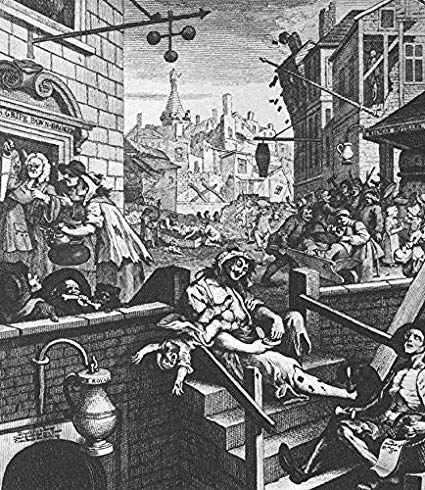 'Gin Lane' by William Hogarth
Conceived against the contagion of utopian ideals sinking into tyranny in revolutionary France, ‘London’ brings another form of tyranny to bear in the consonantal violence of four rhyming quatrains. For Blake the metaphysician and purveyor of incandescent symbols has a wider purpose to distil here: the details of his poem accrete to build a compelling metaphor - as they do elsewhere in his visionary collection Songs of Experience – for the failure of a nation to countermand the spiritual and physical privations of its citizens. The ‘hapless’ soldier who gives his life for no discernible reason, the terrible lot of the child chimney sweeper, the girl doomed, out of desperation, to harlotry – are confessions of an inherent sickness.

Tyrannised by brute circumstances, by a body politic whose economic agenda sacrifices reflection to profit, and by a Church whose strategic secular interests maintain the corrupt fabric at the expense of true spirituality and social concern, Blake ‘charters’ the progress of the state as though by business contract. The imposition, and self-imposition, of ‘mind-forg’d manacles’ give crushing alliterative weight to the howls of pain which will ensue.


Also by Steve Whitaker...
Poem Of The Week: 'Tamer & Gyrfalcon' By Yvonne ReddickThe Bog Togher And The Byerley Turk: Ireland's Forgotten Past By Turtle BunburyPoem Of The Week: 'Snow' By Edward ThomasSong Of The Wind: White Ink Stains By Eleanor BrownReview: Life In Our Hands at Settle Stories
The raw power of Blake’s declamatory plea in the second stanza is the mark of an anger which will find no restitution, save in imagination. The bitter rendering of the marriage ‘contract’ in the poem’s concluding line utterly undermines the institution’s claim to sanctity. One of the most perfectly judged oxymorons in English literary history, we are obliged to believe that the ‘Marriage hearse’ spells another kind of incarceration and entombment, a further reinforcement of constraining social mores whose ‘chartering’ compromises any sense of sincere spiritual vigour.