Entranced, you turn again and over there
It is white also. Rectangular white lawns
For miles, white walls between them. Snow.
You close your eyes. The terrible changes.

White movements in one corner of your room.
Between your hands, the flowers of your quilt
Are stormed. Dark shadows smudge
Their faded, impossible colours
But do not settle.

You hear the ice take hold. Along the street
The yellowed drifts, cleansed by a minute’s fall,
Wait to be fouled again. Your final breath
Is in the air, pure white, and moving fast. 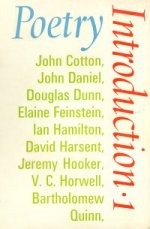 A sense of darkness coming in over the fields, to paraphrase Larkin, transfigures Ian Hamilton’s somnolent, strangely passive, poem. Rendering death as an inexorable encroachment, and mortifying the architecture of the dying figure’s surroundings with the heavy symbolisms of snow and creeping shadows, Last Illness is a study in gathering unease no less frightening than Larkin’s own in Going.

The omnipresence of images of snow and limitless alabaster-white landscapes extends the poem’s philosophical reach towards a sepulchral journey of demise. But the process is also marked by contagion: the besmirching of the cleansing white of snow by the smudging and fouling of contaminants echoes the drifting of life into a new realm, as darker forces ‘storm’ the body like ravaging cancer cells, and the residual colours of life are subsumed. Hamilton’s moribund reading, though shored up by an iambic pulse, faints into decline.

‘Last Illness’ is taken from Poetry Introduction : 1 published by Faber (1969)