Instead of a Journey

Turn like a top; spin on your dusty axis
Till the bright metal shines again, your head
Hums and the earth accelerates,
Dizzy you drop
Into this easy chair you drowse in daily.
Sit there and watch the walls assume their meaning,
The Chinese plate assert its blue design,
The room renew itself as you grow still.
Then, after your flight and fall, walk to the garden
Or at the open window taste return:
Weather and season, clouds at your vision’s rim,
Love’s whims, love’s habitation, and the heart
By one slow wheel worn down, whetted to gladness. 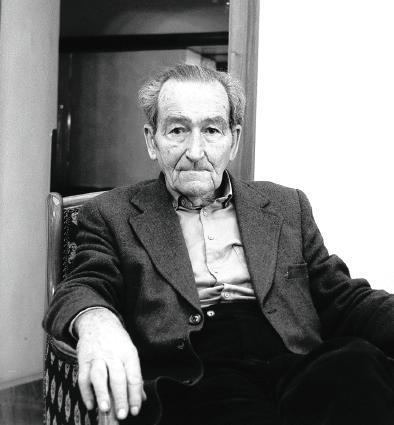 Michael Hamburger
Michael Hamburger’s poem of love and restoration is insinuated seamlessly into a pattern of rhythm which grows and contracts like the beating of a heart. Formal conditions are absorbed into meaning as though the feeling of dizzy abandonment and recovery could be held in harness by words alone. The poet’s skill is clear but somehow undisclosed: the languid rallentando of the fourth and fifth lines, which are deliberately slowed by the weight of alliteration, makes of the preceding ‘accelerate’ a palpable onomatopoeia, as if the figure to whom the poem is addressed were spinning into glimmering infinity.

‘Instead of a Journey’ is an artfully-crafted poem. Amongst the locators of reorientation – the process is adroitly rendered as ‘walls assume their meaning’ and a sense of ‘return’ is tasted at the open window – we are obliged to consider that the object of gentle veneration is elderly. The daily drowsing, the suggestion of ‘bright metal’ dusted with age give notice of a slow decline. But the return to the stillness of the day is also a focus for reflection: the ambiguity of the final lines might also yield the possibility of a journey to the past, conjured, perhaps, in the clouds at ‘vision’s rim’.

The power of love is a constant here, as durable as the ‘weather and season’, and where, in the bewildering whirl of the first lines, its early vigour is briefly revivified, we find, in an associative metaphor, love’s corollary in age: the steel is now tempered, the grindstone upon which it is whetted transforms the gleaming metal into the ‘gladness’ of final contentment.

‘Instead of a Journey’ is taken from The New Poetry: Selected and Introduced by A. Alvarez, and is published by Penguin Books.


Also by Steve Whitaker...
Poem Of The Week: 'Funeral Flowers' By Jill PennyBombs & Bananas: The Last Dinosaur In Doncaster By Sarah WimbushSurfacing After Rain: The Book Of The Earthworm By Sally CoulthardThe Music Of What Happened: Corona Ceoil - An Anthology By Leeds Irish Health & HomesPoem Of The Week: 'Hulme Five - August 1969' By Mike Harding