A smile to remember

we had the goldfish and they went around and around
in the bowl on the table near the purple drapes
across our front picture window and
my mother, poor fish, always smiling, wanting to
appear happy, she always told me, "be happy, Henry,"
and she was right: it's better to be happy if you
can be
but my father beat her two or three times a week while
raging through his 6 foot two frame because he couldn't
defeat what was attacking him.

my mother, poor fish, poor goldfish, poor nothing fish,
wanting to be happy, being beaten two or three times a
week and telling me to be happy: "Henry, smile!
why don't you smile?

one day all the goldfish died, all five of them,
they floated on top of the water, on their sides, the
eye on each top side still open,
and when my father got home he threw them to the cat
there on the kitchen floor and we watched as my mother
smiled 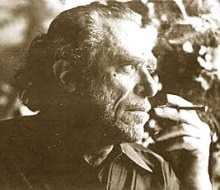 Charles Bukowski
There is a terrible inevitability to German-American poet Charles Bukowski’s sad reflection on the institutionalised randomness of domestic brutality. Almost without artifice, ‘A smile to remember’ needs little in the way of formal adjustment to grab the reader by the throat. Written in the simplest of styles, Bukowski’s almost conversational monosyllables heap irony on the phenomenon of abuse perpetrated behind closed doors, for the mood and meaning they convey is deafeningly plangent.

Bukowski’s tone is disingenuous: inhabiting, almost, the attitude of a child, a witness to the systematic erosion of his mother’s will by violence both physical and psychological, his words insinuate our collective human complicity in a misery that ‘deepens like a coastal shelf’. Which is not to excuse the perpetrator on grounds of inherited patterns of abuse: that the father/husband figure ‘couldn’t / defeat what was attacking him’ is not intended to absolve personal responsibility.


Also by Steve Whitaker...
Review: Atalanta Forever At Piece HallPoem Of The Week: 'Those Winter Sundays' By Robert Hayden (1913-1980)The Smell Of Lemons: Japan Stories By Jayne JosoPoem Of The Week: 'Everest' By David WilsonPlaying Without Thinking: Like Fado And Other Stories By Graham Mort
The wife/mother’s misplaced stoicism is both a virtue and a failing here: her encouragement to keep smiling at the gallows pole is a triumph of selfless maternal care over the dysfunction of paternalistic control. But the crushingly sardonic smile, worn like a rictus, is also a sign of resignation, of the extreme unlikelihood of escape.

In the end, the mother’s ‘bequest’ of happiness to her son is a paradox - the smile in the face of a final act of insouciant nastiness is one of incarceration. The phenomenal increase in incidences of domestic abuse over the last fifteen months gives Bukowski’s extraordinary poem a renewed relevance.