It’s run an’ jump an’ hop an’ skip,
An’ sheawt hooray, an’ hip, hip, hip,
It’s singin’ songs an’ eytin tripe,
An’ suppin’ pints at single swipe,
An’ brass for th’ wife to buy a hat,
An’ th’ childer brass for this an’ that,
An’ beauncin’ gaily op an’ deawn,
Yo’ connut find a merrier teawn,
When Owdham’s won. 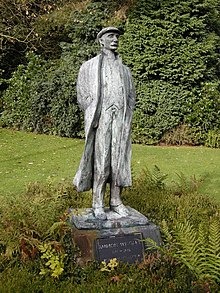 Statue of Ammon Wrigley at Uppermill
If you were to remove this simple, sentimental dialect poem of Ammon Wrigley from the context in which it was wrought you’d be left with a monochrome diptych of thumping joy and football-induced misery, whose second stanza does for domestic relations what Mr Punch did for Judy and the baby. Life could never be as black and white as the winning or losing of a football match might dictate, though you could incline towards Bill Shankly’s only half-joking view that the sport is more serious a matter than life and death.

The idea is to not to take ‘Owdham Footbo’’ too seriously, but to consider, instead, the robust iambics and delicious turns of vernacular phrasing that give it a syntactical bounce. Best read out loud in an approximation of turn-of-the-twentieth-century East Lancs., the poem’s vigour is leavened no end by the tortuous pronunciation, or attempted pronunciation, of words like ‘cleautin’ and ‘cursin’, which is what the male patriarch evidently did to wife, family and cat after the Latics lost to Accrington Stanley of a ‘Setturdy’ afternoon.

That the real butt of the joke is the narrator himself - ‘Awm sure mi brains han left mi yed’ shows a modicum of self-awareness – only partially rescues him from the contagion of cultural inheritance and its physically abusive manifestations. But, again, such an attitude divorces Wrigley – a working class millworker and historian from Saddleworth who started work at nine – from a social milieu where ‘cursin’ and sinking pints at ‘single swipe’ were the commonplaces of the daily grind.