Poem Of The Week: ‘Ruin’ By Richard Martin 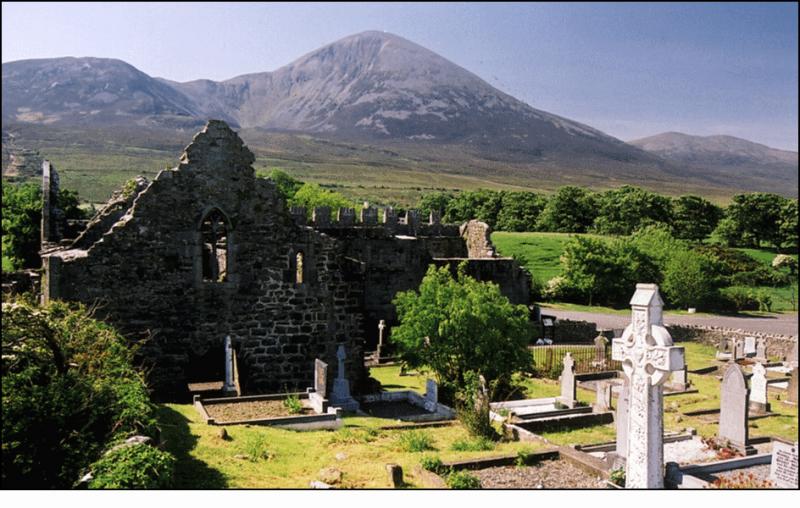 Murrisk Abbey and Croagh Patrick
That revenants ‘persist’ in holy places may have more bearing on perceiver imagination than ghostly appearance, but, as Larkin found, some deep, irrational compulsion draws us to consecrated ground.

a barrel roof broken-backed as an old sofa,
a blind arrow-slit of a window,
one caved in corner trailing leaves;

a chapel, oratory, or such,
abandoned, they say, centuries ago,
a refuge now for errant goats.

Whether the spirit of the saint, that
locally revered holy man, still resides here
depends on your faith,

the theology of sanctity, or simply
on his own inspired persistence.

Reading Richard Martin’s languid, thoughtful poem, I was reminded of the fifteenth century abbey of Murrisk in the far, to some degree other-worldly, west of Ireland. Nestled at the foot of the country’s holy mountain, Croagh Patrick, the abbey carries the stolid weight of stone-worn time in its annals. Overlooking the odd calm of Clew Bay and its assemblage of spits and islands, the graveyard harbours, if not restive spirits, then certainly the suggestion of presence. Nor could I adequately explain the nocturnal door-handle turning and incessant groaning of floorboards in our cottage which more or less abutted the cemetery. Strange place, thick with history and the tragic memory of the many who fetched up along this coast during the Famine, and are commemorated by the ‘Coffin Boat’, a sculpture of despair whose skeletal framework is its own fate.


Also by Steve Whitaker...
Poem Of The Week: 'Tamer & Gyrfalcon' By Yvonne ReddickThe Bog Togher And The Byerley Turk: Ireland's Forgotten Past By Turtle BunburyPoem Of The Week: 'Snow' By Edward ThomasSong Of The Wind: White Ink Stains By Eleanor BrownReview: Life In Our Hands at Settle Stories
Martin’s images of decay punctuate vision like a randomly surveying eye. Beautifully drawn in a series of ambling tercets, they bespeak abandonment no less than the abbey at Murrisk. This ‘refuge now for errant goats’, in fact, shares the deliberately nonchalant tone of Larkin’s ‘Churchgoing’. And like Larkin, Martin is preparing the ground before a final hint of ambiguity - an insouciant distancing of any sense of religious affiliation wrapped in a light-hearted paradox of agnostic uncertainty.