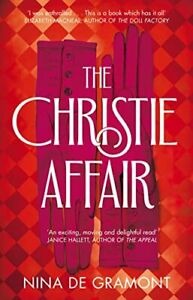 I have always been a fan of Agatha Christie novels. I remember discussing them with my form teacher in the lower sixth as we swapped different volumes and compared our thinking. It was a great means of reading so many more volumes of a popular collection of mysteries. I also now live in Harrogate where Agatha Christie so famously spent her few lost days – the ones she claimed not to remember - and where a Crime Writing Festival is still held each year. It seemed natural, then, that my attention should be drawn to The Christie Affair by Nina de Gramont, when it appeared on the shelves of local bookshops.

This novel has all the ingredients of a crime thriller and a romance, both tragic and otherwise. There are murders, runaways and secrets.
The novel offers a plausible and engaging theory about the brief disappearance of Agatha Christie, interweaving fiction with truth. That Agatha Christie did vanish from her home in Sunningdale, Berkshire, on Friday, 3rd December, 1926, under bizarre circumstances, is not in dispute. Her car was found abandoned several miles away, the headlights left on and a suitcase and coat left in the back seat. There was little hope of a happy outcome as nearby lakes were dredged. Christie was already well known and unusually, more than a thousand policemen were assigned to search for her. The story was headline news across the country and there was a public furore. There have been many theories to explain her disappearance, ranging from nervous breakdown to publicity stunt, but while she was eventually found safe and well, on 14th December, Christie herself never explained what happened to her, claiming simply not to remember. The Christie Affair is a fictional exploration of the events of those eleven days as recalled by Nan O’Dea, the supposed mistress of Agatha Christie’s husband, Colonel ‘Archie’ Christie.

This novel has all the ingredients of a crime thriller and a romance, both tragic and otherwise. There are murders, runaways and secrets. There is also love and longing and a group of characters for whom the reader develops a fondness. To say the story centres solely on the disappearance of Agatha Christie is not true. Far more intriguing and thought-provoking is the story of Nan, the girl who sets out to ensnare a married man, for reasons of her own. He is a man who is easily bored with his life and who indulges his roving eye, not realising, on this occasion at least, that it is he who is being used.

That Agatha Christie did vanish from her home in Sunningdale, Berkshire, on Friday, 3rd December, 1926, under bizarre circumstances, is not in dispute.

The novel begins at a slow pace, akin to the slow pace of life in rural Ireland at the start of the twentieth century where Nan and Finbarr meet and fall in love. The First World War, however, irrevocably changes the futures of many, including those who do not fight in the trenches, and Finbarr and Nan are prey to that terrible conflict.

Nan’s story is touching, all the more so because it has a ring of truth. As her dark secrets are revealed, the reader cannot help but take pity on her. The description of the heartless treatment meted out to young unmarried mothers by those who were meant to help, is not entertainment but condemns the perpetrators and justifies the actions of some of the young women.

In contrast, the sense of freedom and release felt by Agatha Christie as she disappears from her home and heads to Yorkshire, is also shared by the reader. The Bellefort Hotel might, perhaps, have been her beautiful fortress, a haven in time of need, although it bears little resemblance to the Old Swan where it is believed Christie actually spent her time. The healing powers of the waters of the spa town are hailed more than once as they provide not only physical comfort but relief from mental torment too.

Far away from home, Agatha Christie enjoys stolen moments of love, shared with the reader, who can do nothing other than approve. Feasting on tins of tongue and peaches, rosy apples and creamy cheese, and quaffing wine rather than ‘lashings of ginger beer’, there is a sense of innocent abandonment to the clandestine time spent in the aptly named ‘Timeless Manor’.

… no, no spoilers … but their characterisation certainly adds to the novel.
The novel becomes a fascinating study of two very different women and the unlikely kinship which develops when Agatha and Nan are brought into close contact and they realise the impact they may have on each other’s lives.

Finbarr and Chilton make endearing foils for Agatha and Nan, love interests destined for … no, no spoilers … but their characterisation certainly adds to the novel. Both are survivors of the war and both travel great distances in the novel – not only in miles. As the Police Inspector charged with searching for Christie in Yorkshire, Chilton becomes embroiled in ways he could never have imagined and finds himself with two murders to solve, to boot. Chris Chilton’s superior, Lippincott, remains unaware of events and is as insensitive to what is going on as so many of Christie’s other policemen who have been helped out by her detectives. Mr and Mrs Leech, as proprietors of the hotel, are discreet in their actions while their guests all have a part to play, not least Mr and Mrs Race and Mr and Mrs Marston, who give persuasive performances as very different honeymooners. And by the way, Conan Doyle, the famous writer of the Sherlock Holmes novels, did indeed participate in the hunt for Agatha Christie.

The denouement is not typical Agatha Christie. The players are not gathered dramatically in the drawing room to hear the outcome of the investigation delivered by Hercules Poirot or Miss Marple, but it is more than satisfactory and leaves a sense of justice having been served.

The Christie Affair is Published by St Martin’s Press