No Sleeping Through This Beauty! 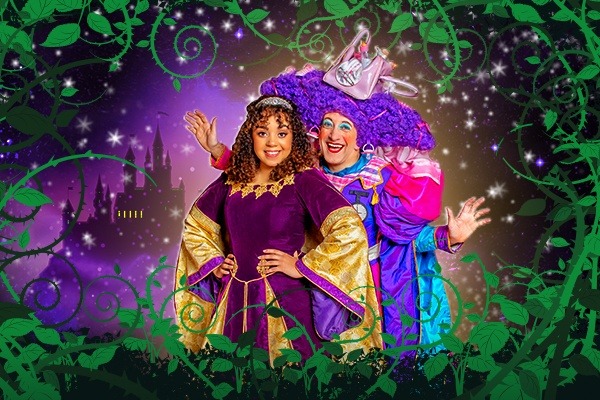 Photo: Ant Robling
The accents were thicker than Yorkshire pudding doused in gravy which only served to make the Lawrence Batley Theatre’s pantomime, Sleeping Beauty, even funnier, as Hester The Jester waded into the baddie with more force than a Barnsley miner on the picket line!

The evening was a competition to see who could get more gags in about Hebden Bridge, Saddleworth Moor and the perils of taking a bus ride to Mirfield alone!

And that’s what made this a great ‘local’ pantomime, full of one liners, local laughs and a script that folk could really take ownership of.

As my theatre virgin guest commented: “We saw Sleeping Beauty at The Carriageworks Theatre in Leeds last week,” I was at pains to suggest that what was about to follow would be nothing like the Leeds production or, for that matter, any other Sleeping Beauty up and down the country.

Which, if you’ll forgive the pun, is the beauty of this art form. Great pantomime should be ‘regional’, engage audiences, give those people who only step into a theatre once a year something they can relate to, and send audience members home with a smile on their faces and giggles in their bones. The cornier, the better!

When you are only a small theatre with either a low production budget or just enough status to attract a small touring company, then you have to rely on the quality of your actors – not always from Emmerdale - if you are to get repeat business.

And what a superb bunch they were. Huddersfield definitely gets plenty of bang for its buck at the LBT.

Esther-Grace Button as Fairy Falalala-la-la-la-la-la (I think I have that right!) was tremendous and, rather than simply relying on rhyming couplets – the mainstay of most panto fairies – she developed her character into a man hungry spell maker always keen, if she could, to get into Prince Sebastian’s vegetable box!


Also by Phil Hopkins...
Newbies Give Joseph Fresh ImpetusOverblown But Enjoyable - Spirit Of The DanceA Dignity That Outwitted The HolocaustTriumph Of Priestley’s Timeless Drama of ConscienceZombie Attack In Leeds (Playhouse!)
Richard Hand as King Herbert the Hesitant was well, erm, if you get my meaning…….BRILL, and was funny because he was stupid but played the part as though he wasn’t, whilst Nicola Jayne Ingram’s Hester the Jester was chuffing great, clearly Barnsley royalty, or at least from somewhere in that neck of the woods!

Nanny Fanny, aka Robin Simpson, is now the regular dame at LBT and, over the last few years, I have watched him become more and more comfortable in his role. He knows the stage, the layout of the theatre, the people and wears the audience like a pair of comfortable slippers. He loves them and they love him.

Alyce Liburd as Princess Aurora – she’s the one who pricks her finger on a spinning wheel and falls asleep for 100 years - was young, funky and keen to let the men know that she could stand on her own two feet and take on Hayley Russell’s Belladonna Bile any day of the week; she was a nasty piece of work too…..and all the better for it!

This panto is full of fun, frolics, some nice ‘off script’ moments and I have no doubt that it will tickle your Fanny, sorry fancy, any day of the week.