Night Swimming:Towards A General Theory Of Love By Clare Shaw 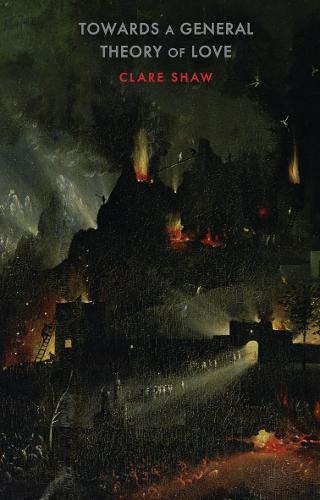 A paradox lies at the heart of Clare Shaw’s shattering new collection: striving, almost childlike, to order love in an anxiety of intractable images, her disclosure of unease is counter-intuitively strident. For performance is one of Shaw’s strongest suits and the banging of a resounding drum is a sincere means of attempting to negotiate a passage towards self-understanding.

It works to great effect here. The mantraic repetitions of her poems ache to be declaimed, yet the earnest iteration of words and phrases is not contradicted by the decanted beauty of her imagery. Time stops momentarily as we glimpse sunlight through trees, or are encouraged to consider natural detail in the midst of an elegy, or narrative of deep regret. The truth is that memory, and the quality of being in the moment, amount to the same thing. In ‘Elegy for My Grandmother’, Shaw turns chronological time by inhabiting those moments retrospectively, to create an honest image of the loved object - the glorious single-mindedness, the brazen declaration of an identity, and the cruel opinions of others. In the poem’s exquisite balance, judgment blossoms in the light of accumulated kindness, and is delivered in an inventory of affirming anapaests:

‘and all the sin in her smile
and the kettles she filled to break ice in the winter,
and the teas that she served to the men in the prison
and the sun through the open door’.

The counterpoint, the decline into dementia, is described in metaphors of snowy occlusion, in the manner of Tony Harrison’s poem of Alzheimer’s, Mother of the Muses, but there is a terrible beauty in the realization, in the hidden obliteration of the mind: ‘Then she was a field / with no footprints in it. / The silence of snow. No one there’. What remains remarkable in despite, is the natural echo of Shaw’s attempt at reorientation, before ‘the light goes out completely’. In the direct and moving address of Letter to My Mother, she recourses to the land and its seasonal disposition for a pared-back, and somehow pristine, imagery of hope and continuity:

‘Now tell me birdsong and flowers. Tell me the importance of
very good manners. Do you remember the Lakes? Do you visit?
Do you recall how high the grass grew, how it was sweet at the
roots? Can you taste it?'

The process of reaching out, of making connections is part of a more general attempt at seeking an identity; the address - sometimes apostrophic, sometimes directed to the living - embodies that attempt in its most moving form, and also at moments of grievous insecurity. Shaw’s very finely-honed empathic sense leaves her vulnerable to the blandishments of suggestion: as resistless against the rising tide as an engulfed water marker, her aqueous sense of abandonment to reflection is as seductive a metaphor as it was in the overwhelming deluge of her earlier collection, Flood. And I know of no finer conveyor of that kind of gathering unease, which is as much a product of general anxiety as of tangible material causes. That Shaw is able to return so consummately to the intimation of an earlier landscape is a condition of her poetics. The domestic foreboding of Love as DIY continues the theme of indivisible interconnections, as though there was barely a glimmer of light between the mood music of emotional disharmony and a ‘sag in the gutter’. The fear, here, creeps like rising damp; its increasing tempo perfectly yielded, again, in rolling anapaests:

‘I’m afraid of the woman I love
and the slump in my roof and that patch on the rafters
and the ivy that loosens the bricks with its fingers’.

If the title of Clare Shaw’s fine collection is a pastiche of a subject that resists theorizing, then the hugely comprehensive nature of her immersion overturns any suggestion of parody. For here is love examined from every conceivable angle, incorporating every degree of pain and suffering, and viewed from the variegated perspective of alter-egos both animate and inanimate. The effort of will is exacting but not destabilizing: serving the greater purpose of epiphany, the poems are strengthened by their openness, their brave acknowledgment of an unsettling past. 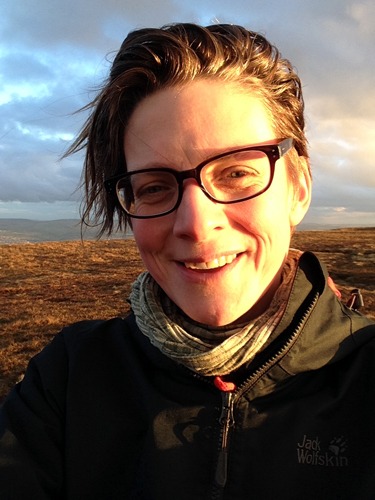 Clare Shaw
Not least in a series of ‘Monkey’ poems which position the animal at a figurative tangent to Shaw’s narrator, hang provenance of motive and experience of love and victimhood on this alien other, and enable an exploration of human impulses at one remove. The insomniac, ‘weeping and rocking’ self-injurer is the brief, the template on which to etch a life of relentless rehabilitation beneath the forensic gaze of psychotherapeutic science. Species-detached, ‘monkey’ is a palimpsest of the distance between the traumatized sufferer and the doctor. Conceived, once again, in the arid language of case studies, the poems’ titles are ironised by a profound lyricism of love and concern:

or express his aloneness with sand’. (‘Monkey and I Discuss the Difficulty of Working Therapeutically with Non-Verbal Traumatic Memories’)

This is a dialogue of one, a self-referential reflection on trauma as perceived in the experience of a different kind of victim. The poem demands to be bathed in renewed light, and a reconciliation, a unification of the past and the present, perhaps even of genders, is effected in the beautiful and affecting imagery of the closing lines of A Psychological Study of The Strange Situation:

‘There’s no moon
but the path is bright.
We carry on walking, snow falling.

He places his paw in mine’.

Elsewhere, the poet finds harmony and disharmony in glittering images. From the gorgeously upholstered backdrop of The Chronicles of Narnia to the prescient juxtapositions of The Garden of Earthly Delights, Shaw discovers a way through the woods, a means of describing divisions, and strange conjunctions of behaviour and emotion in wildernesses of metaphor. Whilst the search in ‘Narnia’ is a fruitful idyll of anticipation, lit, like hope, in a ‘Northern sky’ of the imagination, the convention of Eden in The Garden is dislocated to accommodate both the disturbing metamorphic terrain of Bosch, and the narrator’s defiantly human re-purposing of prelapsarian morality:

‘we were not ashamed of our skin.
We lay in the grass, and you smelt of sun.
And what happened between us was holy’.

The rising water that dominated Flood makes several re-appearances in this collection, in what must now amount to a preoccupation. And again, its presence is mutable, acting both as literal manifestation and metonymic device, for water, here, is reductive, corroding any visible feature of apprehension, like the faces of Antony Gormley’s rusting figures looking out to sea on Crosby Beach. The obliteration of contextual markers by water or snow is a serviceable metaphor for the overwhelming of the mind by grief, love, or dementia, and all recur here, with attendant possibilities.

The redemptive lake of ‘Self-portrait as Hermaphroditus entering the water’ encourages an irresistible Empedoclean leap into its maw, in search of the comforting ‘wholeness’ of the poem’s Platonic epigraph. And, in the simple, monosyllabic tercets of Night Swimming, Derwentwater, Shaw invests the lake with depths of ‘knowing’, of storied memory inhabiting the darkness, and real foreboding amongst the reeds. The image of unrippled calm which opens the poem is astonishingly well-crafted, and achingly prismatic:

‘Each lake is a page
we have not written on.
The mist is breath

suspended. Stars shiver.
There’s a ghost
of a winter moon.’

The seeming invincibility of the Titanic was undone by an iceberg - undone as irrevocably as an ‘unsinkable’ relationship. Clare Shaw’s wise allegory for the hubris of certainty in love gives one self-contained, synoptic definition of her fine collection’s wider mandate. A persuasive inventory of detail accompanies the narrator/ liner to its denouement, mirroring, at every stage, the gathering sense of doom: the tearing of the steel, the stopping of the engines, the gutting of the heart. Sweet tea and consolatory words will not abide where the seeds of failure inhere:

‘Sweetheart, the orchestra did its best
But they all drowned’. (‘The Titanic Reflects on the Recent Ending of a Long-term Relationship’)


Towards a General Theory of Love is published by Bloodaxe. More information here.