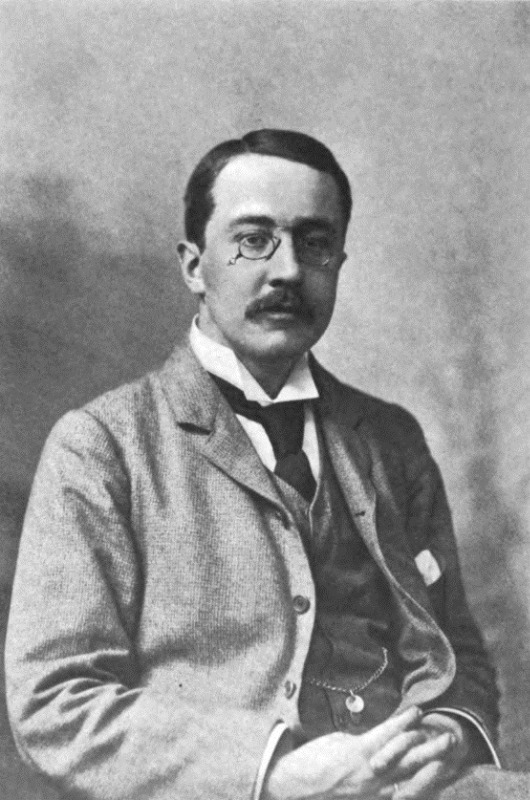 E.W. Hornung
In times of crisis, it's a fillip for the mind to have good friends on hand. Mine include amongst many, E.M. Forster, Siegfried Sassoon, H.G. Wells, P.G. Woodhouse, Shakespeare and Sir Arthur Conan Doyle. However, over exposure to some friends is inimical to that friendship. Like a pair of much-loved slippers, the comfort they afford gradually lessens over time though they remain cherished. In my case, Doyle or more precisely, Sherlock Holmes and his willing bulldog Watson, has become a friend I know a little too well and a little goes a long way. My literary pluralism causes me to keep a varied collection of friends on hand, turning to each as the mood takes me and never finding the companionship anything less than scintillating. Perhaps the greatest joy a bibliophile can rely upon is finding a new friend and adding them to their circle. My latest new friend is H.W. Hornung.

Born in Middlesbrough on the 7th June 1866 and shuffling off on the 23rd March 1921, Hornung spent his formative years in Melbourne, Australia, (like myself) and then returned to England. Though he did not become a celebrated man of letters, he did become a fine and to my mind, much underrated author. Hornung published A Bride From The Bush in 1890, The Boss of Taroomba in 1894, The Amateur Cracksman in 1899, Stingaree in 1903, No Hero in 1903, The Crime Doctor in 1904 and Mr Justice Raffles in 1909. Notes of a Camp Follower on The Western Front (1921) was his last work. As with all friendships, we forgive minor faults. With that in mind, Stingaree, an antipodean echo of Raffles, is best avoided due to its lack of charm, clunky plot construction and unconvincing characters. I think any author should be forgiven the odd misfire, especially when they have given us something wonderful to square the account.


E.M. Forster
I was aware of his greatest creation, A.J. Raffles in The Amateur Cracksman but only by dint of reputation. I had never read a word of this almost forgotten literary entertainer. Hornung was the brother-in-law of Doyle, having married the latter’s sister Constance. As a huge fan of Sherlock Holmes, Hornung did something at once brilliant and shocking; he took Holmes as his starting point for his own creation, A.J. Raffles. It is also believed that Oscar Wilde was an influence upon Hornung's gentleman thief. Hornung denuded Holmes of his clinical efficiency, moral conscience, respect for the law, neurotic mania and emotional sterility. He replaced these traits with charm, playfulness and an inability to take oneself seriously. Most tellingly, Raffles, unlike Holmes, has a cavalier disregard for the moral rules which prevailed in late nineteenth-century London. He also maintained many of the Holmesian tropes and habits in his creation. A.J. Raffles is the polar opposite of Holmes, yet both share a debonair elegance befitting of their social class, intellects and personal tastes. In short, Hornung created a literary inverse of Holmes and gave the world Raffles, dedicating his book to Doyle as an homage. Interestingly, Doyle did not warm to the idea that the suave Raffles, a thief in the mode of John Robbie (Cary Grant in To Catch a Thief) made his living from a life of crime!

The Raffles canon can be found in short story collections and individual novels. All see this dashing miscreant mask his dubious activity under the clever disguise of being England's greatest spin bowler of the time. Together with his partner in crime, Bunny Manders, Raffles steals from the wealthy members of high society and its criminal overlords simply for the sheer thrill of "the sport". Ever the gentleman, A.J. lives far beyond his means and maintains his sense of honour and fair play, whilst being an irredoubtable cad with an outsider's distaste for exclusivity. Unlike Holmes, Raffles can never be relied upon to succeed in his madcap exploits and spends his life dicing with the noose by both choice and to some extent incompetence born of egotism, self-confidence and reckless adventuring. The stories offer ripping yarns designed to entertain the reader, however Hornung guilds these with his command of prose, littering the high jinks thrills with beautifully-turned sentences and insights into life that are almost entirely absent from Doyle's work. Raffles is an antihero, written by a man who almost touches the finesse and sensitivity of E.M. Forster. Unlike most of the Holmes adventures, the escapades of Raffles are those of a man intent on pleasure rather than justice and in my opinion, he is one of light literature's gems. Raffles is now one of my friends, though one I'd never leave in my house alone! 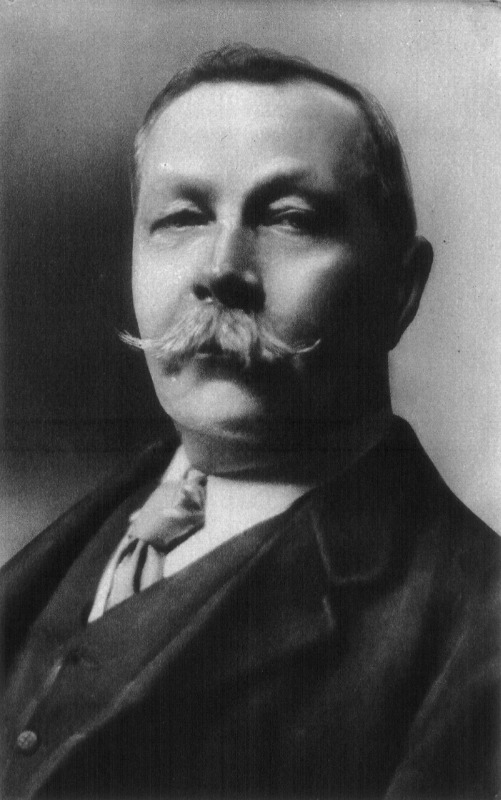 Sir Arthur Conan Doyle
No Hero is Hornung turning his storytelling prowess to the affairs of the heart and the callous sexism of a late nineteenth-century society riddled by etiquette and class at the expense of authentic feelings or any semblance of true human connection. Set in the upper class resort of Zermatt in Switzerland ,which sits at the foot of the magnificent Matterhorn, this short novel deals with unrequited immature infatuation, the sagacity of experience, supercilious chauvinism, emotional cruelty and the need to respond to the matters of one's heart rather than to the conventions of an emotionally stunted class system. Captain Duncan Clephane is a Watson-esque military invalid sent abroad by his first love to prevent her only son from marrying a disgraced widow in the form of the tormented outcast Mrs Lascelles. Hornung surpasses even Forster in the poetic expression of inner ruminations and deftly described encounters, teasing out the hidden truths buried beneath polite, yet morally bankrupt social conventions. His characters are exquisitely drawn, exposed with the pellucid insight of an author who has a gift for a brief sentence that captures everything obvious whilst elucidating the emotional hinterland of his characters. The story moves as effortlessly as a stream to the sea, the reader enjoying a graceful journey as the emotional power of the novel intensifies. For me, this book is perfectly formed, gripping and whilst not an intellectual tour de force, it is deeply satisfying. I’ve read ersatz attempts to deal with its themes before, only to doubt the author's sincerity, become bored by overly elegant descriptions of emotionally awkward moments and develop little sympathy for thinly made characters. No Hero was a pure delight to me, especially in that whilst looking for Raffles I found something far closer to E.M. Forster and yet unique and brilliant in its own right. I'm not suggesting that Hornung should join the literary giants and be reappraised by their standards. I simply believe that he wrote books which deserve attention and deliver no more or less than great entertainment.

My shelves are heaving with new friends waiting to join the party. Perhaps Hornung might be someone you might like to meet and add to your own circle. Now is definitely a good time to welcome new friends and enjoy their company.