Long Lost Families: A Child of the Dales by Diane Allen 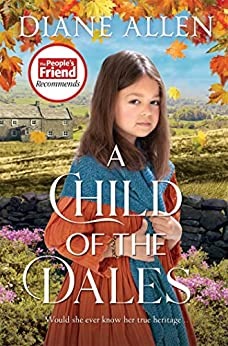 Get the tissues ready, Davina and Nicky are on the hunt for Long Lost Families again. I don’t know about you but the premise of this programme, to reunite families who have previously been separated for whatever reason and are now searching for each other, is heartwarming. At least, the stories we see on TV are, with their (usually) happy endings.

So, too, A Child of the Dales, Diane Allen’s twelfth book, which is all about families. We have a foundling, romance and Romanies and even some smuggling thrown into this feel-good yarn, which begins in 1785. Add to that the rural setting of Tan Hill Inn, the highest pub in the UK, and its environs, and you have all the ingredients for a comfy read.

Ruby has only ever known Tan Hill as her home, having been brought up by Martha who found her abandoned on the doorstep when she was a tiny baby. She has had a happy life, blighted only by the death of the man she knew as Father. A hard worker, with a free spirit and the ability to charm the customers, Ruby is well liked and has got by. But Martha kept a secret. Desperate for a baby of her own and unable to conceive, she hid the note which came with the baby, kept the child for herself and denied the natural father his right to parenthood.

Young romance comes along in the form of the stablehand, Tom. Tentative at first, these two soon recognise their feelings and give in to one another. When a dalliance is offered, Ruby is tempted briefly but is quickly pulled up short; it’s enough to prove to her what true love really is - and he’s called Tom.


This is a simple, uncomplicated and undemanding read.
When Martha is taken ill with a failing heart, Ruby, having returned to Tan Hill and made her peace, steps up to the task of running the pub. It’s hard work but she is determined not to let Martha down. It, too, has its dangers for a beautiful young woman, but fortunately for Ruby it seems help is always at hand.

Ruby’s father has never stopped looking for her mother, the only true love he has ever known. She was whisked away by her disapproving family and try as he might, he has never been able to find her. Sometimes, however, hiding in plain sight is the best cover and Ruby discovers she was never truly abandoned by the mother who loved her.

This is a simple, uncomplicated and undemanding read. Allen’s love of the Yorkshire countryside is made clear in the descriptions of her beloved Dales and of the folk who live there. The customers at Tan Hill have a ring of truth about them and the food and drink served up is wholesome and as authentic as you would expect. Although set in the late eighteenth century, the novel has a timeless quality, concentrating as it does on the characters and their search for love. It felt sometimes as though there were a few too many ingredients thrown into the mix but ultimately, each played its part and helped create a very agreeable whole.


A Child of the Dales is published by Pan Books