Jubilee Poem Of The Week: 'The Patriarchs - An Elegy' By Simon Armitage 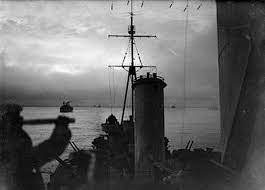 View from the cruiser HMS Sheffield as she sails on convoy duty through the waters of the Arctic Ocean. Image - Wikipedia
The Patriarchs – An Elegy

The weather in the window this morning
is snow, unseasonal singular flakes,
a slow winter’s final shiver. On such an occasion
to presume to eulogise one man is to pipe up
for a whole generation – that crew whose survival
was always the stuff of minor miracle,
who came ashore in orange-crate coracles,
fought ingenious wars, finagled triumphs at sea
with flaming decoy boats, and side-stepped torpedoes.

Husbands to duty, they unrolled their plans
across billiard tables and vehicle bonnets,
regrouped at breakfast. What their secrets were
was everyone’s guess and nobody’s business.
Great-grandfathers from birth, in time they became
both inner core and outer case
in a family heirloom of nesting dolls.
Like evidence of early man their boot-prints stand
in the hardened earth of rose-beds and borders.

They were sons of a zodiac out of sync
with the solar year, but turned their minds
to the day’s big science and heavy questions.
To study their hands at rest was to picture maps
showing hachured valleys and indigo streams, schemes
of old campaigns and reconnaissance missions.
Last of the great avuncular magicians
they kept their best tricks for the grand finale:
Disproving Immortality and Disappearing Entirely.

The major oaks in the wood start tuning up
and skies to come will deliver their tributes.
But for now, a cold April’s closing moments
parachute slowly home, so by mid-afternoon
snow is recast as seed heads and thistledown.

Even the Republican voices amongst us – and I count myself in that number – seem to harbour some respect for the Queen, or more precisely for her commitment to her role, and her sense of duty and service to the nation. Whilst her immediate family continue to disintegrate into misconduct and ignominy, the grand matriarch of these islands is seen steadfastly to hold the line, faithful even unto death. Few will forget the image of her, broken and conspicuously alone, as her ‘rock and stay’ of more than seven decades embarked on his final journey.

Who knows what sympathies or antipathies Simon Armitage secretly cultivates? His duties as Poet Laureate are ceremonial and light, but he is occasionally commissioned to put together a paean to the monarchy. Neatly sidestepping any suggestion of deference, Armitage’s most recent foray into the realm of royal elegy reflects upon a general sense of dutifulness, of a cheerful stoicism, that looks anachronistic in our own time. His poem, although centred exclusively on Prince Philip and the brave band of men who were his wartime contemporaries, describes an attitude of mind embodied also in the Queen, who spent at least some of her war learning how to fix crankshafts. The urge to support the war effort in practical terms is somehow unsurprising in one who is supremely focused on the matter in hand.

And the matter in hand is the ‘ingenious’ endeavour of the kinds of men who fought without complaint, and brought to an austere landscape of darned socks and re-tooled boots, a spirit of self-sacrifice, because it was the right thing to do. ‘The Patriarchs’ reminds me, obscurely, of the denizens of Tennyson’s ‘Ulysses’, for Armitage’s ‘avuncular magicians’ are embarking upon a robust campaign of endurance, up the coast of Norway in the bitter cold of Arctic Convoys, helping to keep the Russians re-armed. The winter tableau that opens his poem is a thin pastiche of the icy blasts of Archangel, as the narrator, like the rest of us, is a thin pastiche of those who served. And that sense of endurance looks nothing less than phenomenal to postwar baby boomers weaned, mostly, on regular dinners of ‘meat and two’ and Dad’s Army of an evening.

A different breed, is what Armitage seems to be saying, of the chaps who embody an ongoing military metaphor as they unroll plans and direct the fleet towards a Murmansk of the imagination. They do so selflessly and with no hope of an encore in the grand theatre of defining moments, and it is fitting, in this fine poem of icy resolve, that the iron of winter should thaw to disclose a slight suggestion of spring in its final, reconciliatory lines.

‘We just got on with it’, said a resolutely monosyllabic Prince Philip, of his wartime experience.