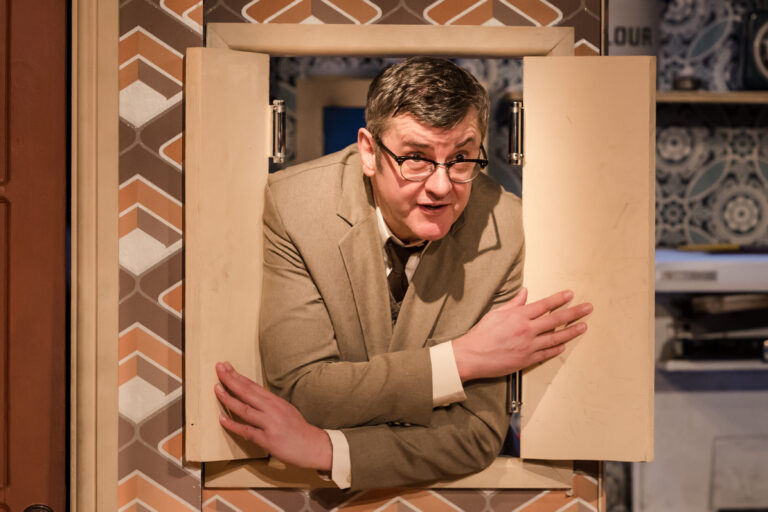 Hilarious mishaps and DIY disasters are bringing the house down, quite literally, as Some Mothers Do ‘Ave ‘Em hits the road with Joe Pasquale (New Faces, I’m a Celebrity, Spamalot, The Producers) as the lovable accident-prone Frank Spencer, written & directed by Guy Unsworth the adaptation of the hit TV show is coming to Blackpool.

Betty has exciting news for Frank, but he’s preoccupied by possible newfound fame as a magician. With guests arriving for dinner and crossed wires all around, priceless misunderstandings are on the menu.

Based on the 1970s classic TV comedy by Ray Allen and directed by the award-winning Guy Unsworth, Some Mothers Do ‘Ave ‘Em is the ultimate feel-good night out.

“I was only twelve years old when the original series showed on television, it was my dream come true when I was offered to play Frank with the stage production” shared Joe.

The programme is still popular overseas being shown in many countries.

"As well as being on the gold TV channels here you can still see the show in places as far away as Canada and Australia" continued Joe.

Michael Crawford played Frank Spencer in the seventies. Amazingly the show only ran for a few series as Joe explained.

“They only made eighteen episodes along with four specials which a lot of people do not realise, they seem to think that there were a lot more than that.”

Although it is over forty years since the programme aired the producers have tried to make the new version relevant to today’s audiences.

“What I didn’t want to do was come on stage and keep saying “ooh Betty” for two hours as the audience would soon get tired of that.There is still a lot of truth in the way I play the character but I try to put a lot of myself into Frank and make him more relevant to today” enthused Joe.

Joe will be performing all the stunts himself just as Michael Crawford did back in the seventies.

“We have to put the stunts into the show as people expect to see them and remember them from the original television show, so yes you will see my sliding down the banister.”

As the production comes to Blackpool Joe is excited about returning to the north again.

"I always look forward to coming back to the Grand Theatre as it is one of Frank Matcham’s finest theatres, not only that but the audiences are always good there."

You might not have seen the show when it was one of the most watched television programmes, which at its peak drew twenty-five million viewers. I wondered then why should anyone who has no prior knowledge of Some Mothers Do ‘Av ‘Em come to see the show. Joe in his infectious manner naturally had the answer.

“After the last two years we have all been through we need something to make us laugh and I can guarantee that after seeing the show you will definitely be laughing, if not for all the two hours length but for most of it.Quite frankly they will love it I’m sure.”


Blackpool Grand Theatre from Tuesday 10th May until Saturday 14th May
Tickets available from:
https://www.blackpoolgrand.co.uk/event/some-mothers-do-ave-em-2022