It's A Kinda Magic - The Wizard Of Oz! 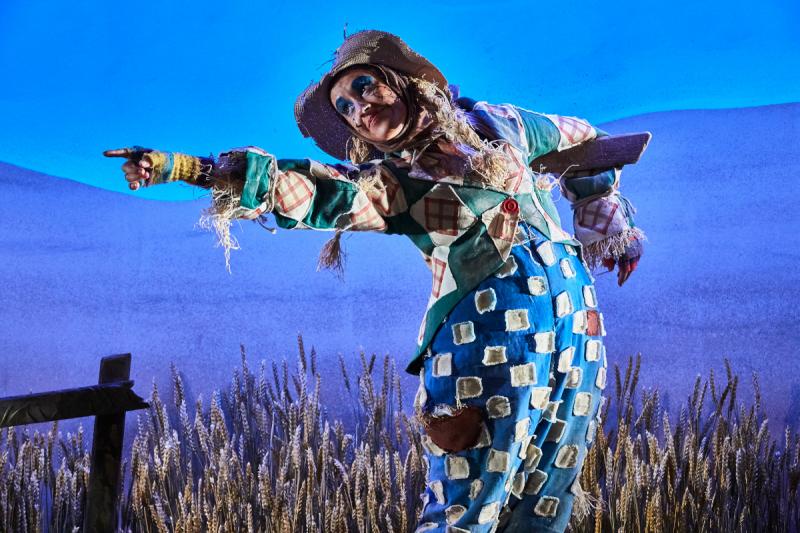 Eleanor Sutton (Scarecrow). All photos by The Other Richard
The challenges of bringing an iconic film like The Wizard of Oz to the stage are complex to say the least, but Leeds Playhouse Artistic Director James Brining has, overall, done a great job even though the production has some highs and lows.

Just saying the name of one of one of Warner Brothers’ most iconic movies, instantly puts you in the shadow of ‘Judy’ and everything the film has come to represent. Whether it is ‘fair’ to compare is another debate entirely but some will.

All I could see at the outset was John Steinbeck’s The Grapes of Wrath, an austere backdrop of mid America during the Great Depression, which was wonderful at capturing the sense of Dorothy’s deprivation on Uncle Henry and Auntie Em’s farm. However, if you are a young child this 20-25 minute section of the show – effectively the opening scenes – may seem like a tiresome dirge, colourless and destined to drag for a good half hour. 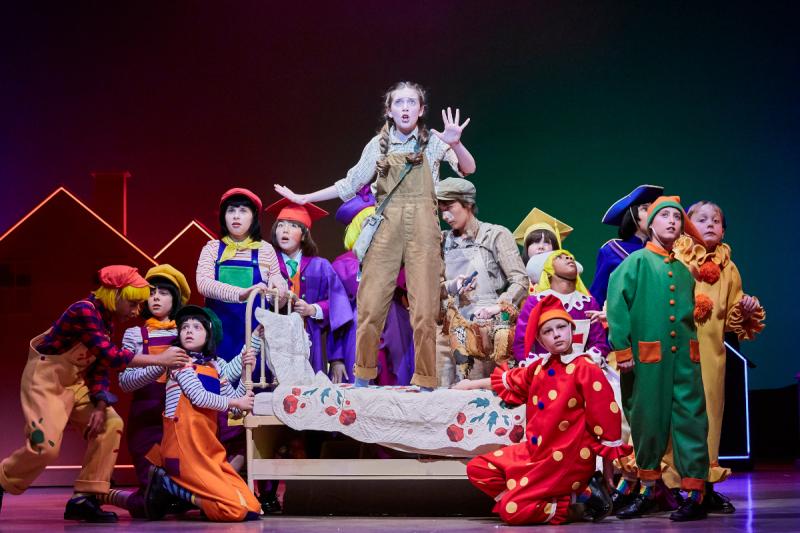 Agatha Meehan (Dorothy) and the young ensemble in The Wizard of Oz.
But, thereafter, the show picks up with every passing minute as it unfolds with colour, vibrancy, great characterisations and some wonderful, bold settings and imaginative props. 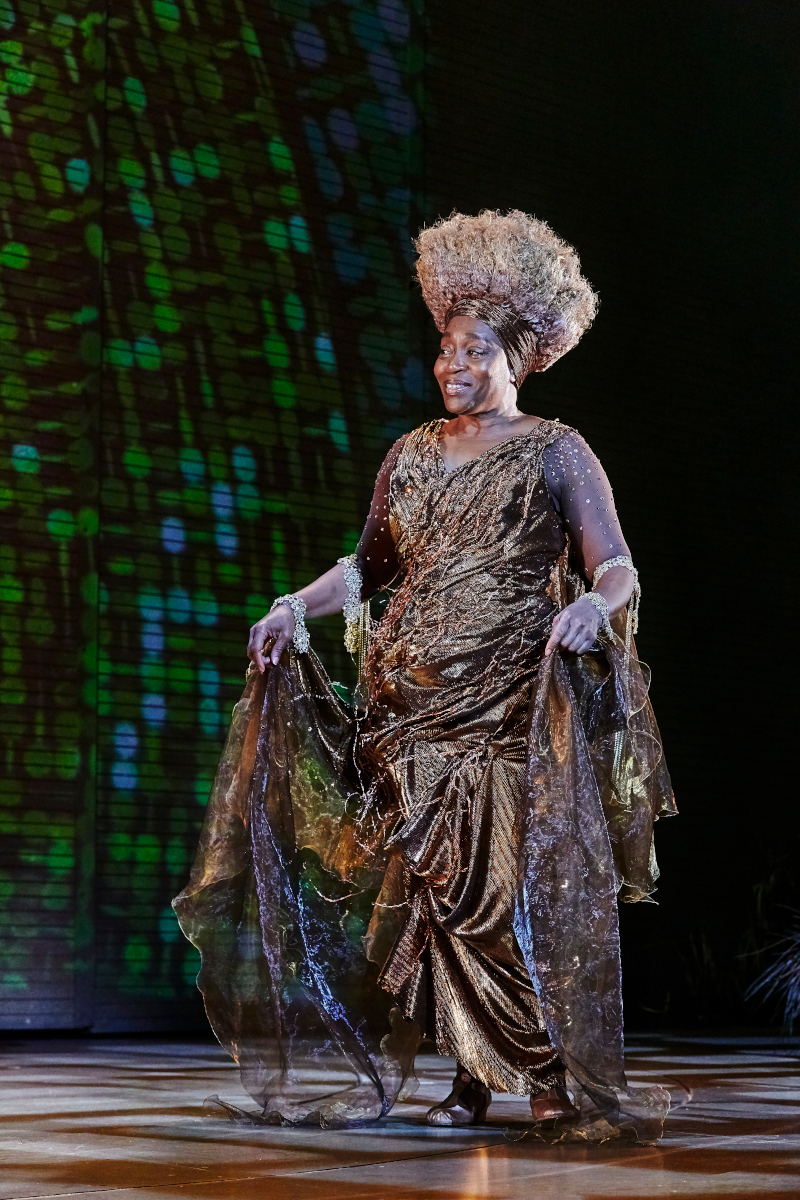 Angela Wynter (Glinda)
As Dorothy finds herself in the middle of the ‘Twister’ we start to see the show transition to the Land of Oz with amazing video techniques, until we arrive to a blaze of colour and a round of applause as our heroine appears in her blue and white picnic cloth dress!

Fourteen year old Lucy Sherman was the sweet, incredibly mature Dorothy who has been well directed, and she anchored the show with all the professionalism of someone much older.

However, Polly Lister as Miss Gulch and the Wicked Witch is beyond brilliant, and the absolute star of this production with an array of gurns and laughs that would put most to shame. You were willing her return to the stage such was her presence.

It was also nice to see old West Yorkshire stalwart, Phil Cole, finally debuting on the Leeds Playhouse stage as Uncle Henry and the Emerald City’s guard, and Marcus Ayton might have been a slight variation of his ‘donkey’ from Shrek in his role as lion…..but that was absolutely fine because his experience as an ‘animal’ with the jolly green giant meant he was an instant hit with the audience! 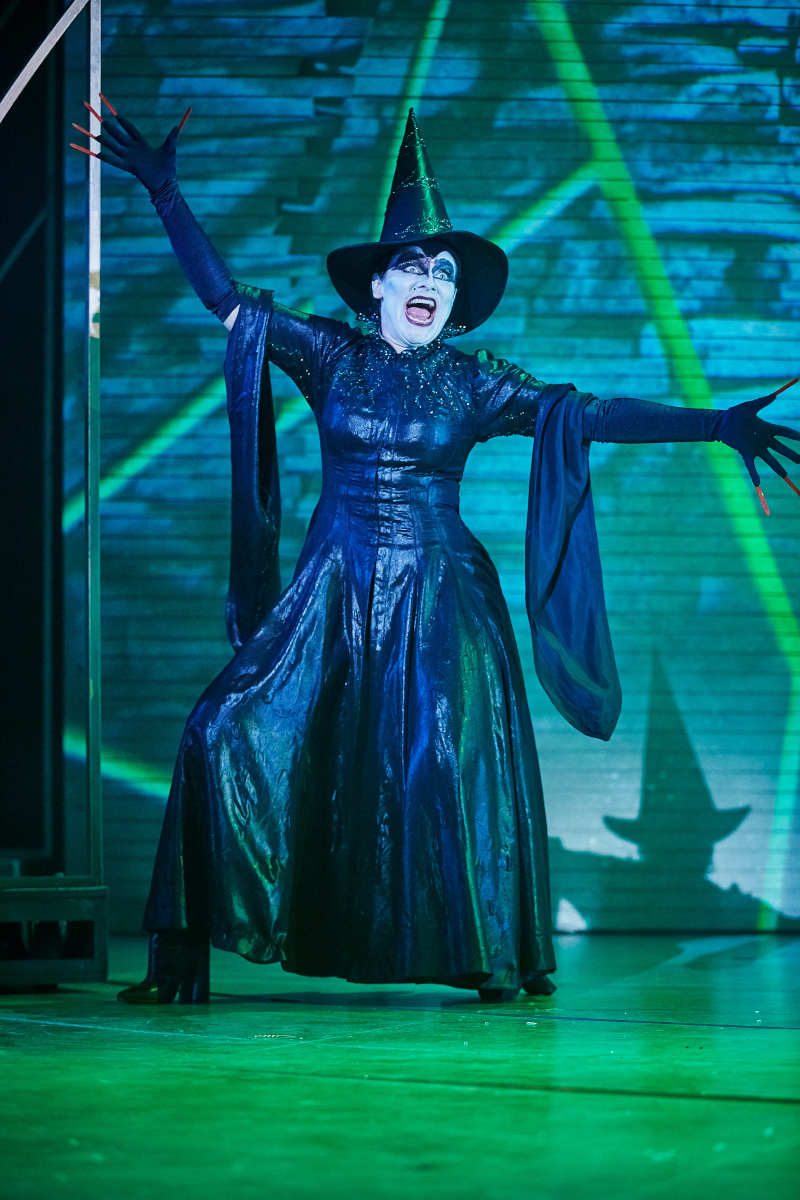 Polly Lister (Wicked Witch of the West)
Some cirque du soleil style aerial acrobatics made for an interesting addition to parts of the show, and Eleanor Sutton as Scarecrow with Sam Harrison as her sidekick, Tinman, one in search of a brain and the other a heart from the great Wizard of Oz, kept the show moving throughout.

However, in the same way that some people mourned the loss of Les Miserables iconic revolutionary, choreographed ‘step’ in one of the more recent permeations of the show, so I must mourn the loss of Oz’s iconic step ball change as Dorothy and her trio of misfits set off down the yellow brick road; so simple but so iconic and, for me, a tiny but important missed opportunity.

The Munchkin kids were also great but in the same way that children playing Snow White’s seven dwarfs doesn’t work, Munchkins as kids is a hard one to swallow…..although I have every sympathy with the challenges of overcoming this conundrum; there are budgets!


Also by Phil Hopkins...
Newbies Give Joseph Fresh ImpetusOverblown But Enjoyable - Spirit Of The DanceA Dignity That Outwitted The HolocaustTriumph Of Priestley’s Timeless Drama of ConscienceZombie Attack In Leeds (Playhouse!)
This is a show that sets out to examine a series of themes from resilience to friendship and transformation and, if you want to find these, you will, however, at its heart with all the adult theorising stripped back, this is a show for children and if the acid test is ‘will kids enjoy it?’ then the answer has to be a resounding yes.

The Wizard of Oz
Leeds Playhouse
Until 25th January