Having reviewed all four of her deliciously corpse-strewn books, each laced with Wilde-like wit and brought to effervescent life with unforgettable characters, perfectly manufactured plots and a sublime understanding of the tropes adored by fans of the murder mystery genre, I was fortunate enough to interview Dowd for our readers shortly after the publication of her debut. How time flies!

Successfully transitioning from hopeful debut to established, award-winning author is an achievement not to be underestimated. In addition to obvious talent, such a journey requires inexhaustible persistence and that most elusive of muses, inspiration. Add in the ability to take the rough with the smooth and to write when the world is burning, or at least spinning with the quotidian imperatives assailing us all, one begins to recognise just how dazzling a feat this is!


... laced with Wilde-like wit and brought to effervescent life with unforgettable characters, perfectly manufactured plots and a sublime understanding of the tropes adored by fans of the murder mystery genre...
Four books into her authorial odyssey, I’m delighted that she does not share at least one of the opinions of her interview-shy literary idol Agatha Christie, who once famously said, “I can’t imagine why everybody is always so keen for authors to talk about writing. I should have thought it was an author’s business to write, not talk”.

Fortunately for myself and our readers, Dowd was more than happy to “talk” and recently gave me the opportunity to catch up with her. Not so much a case of establishing “whodunnit”, more one of exploring something just as intriguing. “What’s it like to have dreamt of writing books for a living and …done it?”

With characteristic ebullience, undergirded by a healthy sense of humility, Dowd told me how she views her undoubted success. “I think I would sum up the experience as being utterly surreal, wonderful and completely unbelievable. I don’t believe it’s happening!”


If you have a rejection, try again. Not everyone is going to like every book. Do your research as to who is more likely to publish it.
Her literary journey has not been without its highs and lows…

“Ups would have to be having the first book come out, winning an award, signing for a fabulous agent, and being asked to speak at the International Agatha Christie Festival on her birthday, (no pressure!)”.

“Downs… in all honesty, there haven’t been that many. I was a little floored by the first bad review where the guy said he wanted to kill everyone, even the dog! I’m not sure whether that was just about my book though. It’s all part of the journey”.

“It’s made me feel very grateful for this chance to do what I love and to never take any of this for granted. I try to enjoy every moment and all the lovely events I’m asked to attend and speak at without letting the nerves get to me!”.

“I still have incredible Imposter Syndrome! I still think people are being a bit tongue-in-cheek when they introduce me as a successful author, or even just as an author! I don’t think there’s any way to overcome that feeling. I suspect writers who have one book out already may not need my advice, but the biggest thing I have learnt is to just keep going”.

“If you have a rejection, try again. Not everyone is going to like every book. Do your research as to who is more likely to publish it. Have a fabulous covering letter, synopsis and first three chapters. They really have to make an impact. But just keep going! It’s definitely worth all that hard work”.

The life of an author may be an idyllic dream for many, however, as is the case with much in life, the words of Agatha Christie are all too true… “But surely for everything you love you have to pay some price”. It seems Dowd agrees and the “price” she gladly pays is hard work, and lots of it.

“Writing an 80,000-word novel takes a lot of determination. It’s not a lounging on a chaise longue kind of profession, I’m afraid, sadly, even though I would love it to be. You have to get up, get to the desk even when you don’t feel like it and get writing for many long hours. At least two words will be worthwhile!”

“I plot meticulously and have to have everything perfect. With each book I’m looking for a new ‘trick’ at the centre of the book. That’s where it starts. Then I begin to take each strand out whilst still focusing on those Golden Age tropes that I love. It’s a mixture really of finding something innovative and new, whilst still being loyal to the Smart Woman style of book”.


I thought that would be a fabulous setting for a murder mystery as it would create a lot of misdirection and confusion. It did… for me, writing it!
Hard work is not the only sine qua non required if an author is to realise their dreams. They will also need a team of ever supportive fellow conspirators around them!

“I have been very lucky to work alongside some incredible people. My agent, James Wills, is hugely inspiring and is so knowledgeable about the kind of books I write. He has the most amazing ideas. I’ve been fortunate to work with Emma Grundy Haigh as my editor. She has an instinctive feel for the books and has become a great friend over the years”.

“All the team at Joffe Books, especially Jasper who gave me my initial chance, are so supportive. But also, I have been very fortunate to become friends with a lot of other authors, particularly the D20s (a group of us who debuted in 2020!). I’ve also met a lot of wonderful authors who’ve become firm friends through the CWA – Bonnie, Vanessa, Anne, Amanda… the list goes on. They are always there with advice, help and sometimes a good cocktail! Authors rely on each other a lot!”. 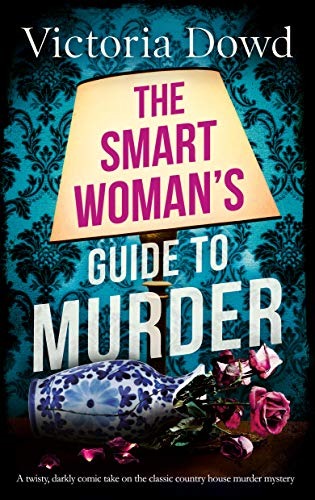 Turning to the Smart Woman’s Mystery series, I was keen to understand Dowd’s authorial intentions for this body (no pun intended!) of creative work.

“My main aim was to create a good plot that worked and was innovative. Alongside that, though, I wanted to do something different with the genre. I wanted to put death right at the centre of the book. It’s strange with murder mysteries that, obviously, by definition, they involve a death or many deaths, but often that becomes a side issue and almost irrelevant to the story. That aspect is sacrificed in favour of the plot and solving ‘whodunnit.’ So in some books, you almost have the detectives and the suspects stepping over the body whilst figuring out who the killer is”.

“I wanted to look more at the impact of death and unresolved grief. In particular, I wanted to put my flawed, dysfunctional, grief-stricken characters in an incredibly stressful, life-threatening situation then push them to the limit and see if they would crack. Because it’s so character driven, that provides a large story arc over the whole series. We see how their lives change with what they have been through, how they grow alongside one another. At the same time though, each story is a self-contained moment in their lives, so can be read as a standalone”.

The Supper Club Murders, was the most challenging because the characters moved around a lot from location to location. The premise was a safari supper club which involved the people in a village on Dartmoor moving to a different house for each course during the dinner. I’d recently been on one and noticed that people kept appearing and reappearing in the dark at various points in the party, but it was impossible to say who was where and at what moments”.

“I thought that would be a fabulous setting for a murder mystery as it would create a lot of misdirection and confusion. It did… for me, writing it! I couldn’t keep in my head where each person was at each moment. Who would have heard something, who wouldn’t etc. So my son built the entire village out of Lego and each character was represented by a mini-figure. The Smart Women looked superb in Lego!”.

In her latest novel, A Book of Murder Dowd playfully alludes to Conan Doyle and his decision to kill off his most famous literary character in pursuit of other projects. Of course, to do so would have been an elementary mistake and the Reichenbach Falls were famously forced to surrender to an ingenious re-write. I wanted to know if Dowd’s own creations, “Mother” and her psychologically fragile, but wonderfully noetic daughter “Ursula” would one day follow the fate of either Moriarty, or Holmes.


Dowd’s muse, Agatha Christie said, “Plots come to me at such odd moments, when I’m walking along the street, or examining a hat shop… suddenly a splendid idea comes into my mind!”.
“There will be more novels and more deaths, but I won’t say who, for obvious reasons. I did kill off a main character in one of the books and I got in a lot of trouble for that, but no one is safe in the fifth book and another very major character will be mourned. They’re murder mysteries, people have to die. I don’t think anyone should be safe otherwise there’s no feeling of real jeopardy. If they’re going to witness murders and be so close to it, the reader has to believe they are genuinely afraid. No one is safe. No one is immortal. I will say no more”.

“I’m very excited about my new series. It’s a murder mystery but this time set in 1929 and involves a journalist called Charlotte Blood. I won’t say too much but it’s a lot more gothic than the Smart Woman series. She’s a very quick-witted young woman who has to unravel a locked room mystery, well actually it’s more of a locked lift mystery, at Ravenswick Abbey”.

“I’ve absolutely loved researching this book. It’s a fascinating period of change, moving from the roaring twenties into the much darker, more difficult 1930s. I’ve also had to do a lot of research around ravens, since the family at the Abbey keep them. They are fascinating creatures with many myths and legends”.

So, it seems Dowd is made of both grit and grace. She has the mettle for the job and the creative legerdemain to carve out a wonderful literary career. Her passion for her craft and ability to invent new stories would appear to be dauntless. Dowd’s muse, Agatha Christie said, “Plots come to me at such odd moments, when I’m walking along the street, or examining a hat shop… suddenly a splendid idea comes into my mind!”. I for one hope Dowd spends many an hour doing likewise and we, her appreciative readers, get to enjoy the fruits of her hard work and joyously inventive mind!