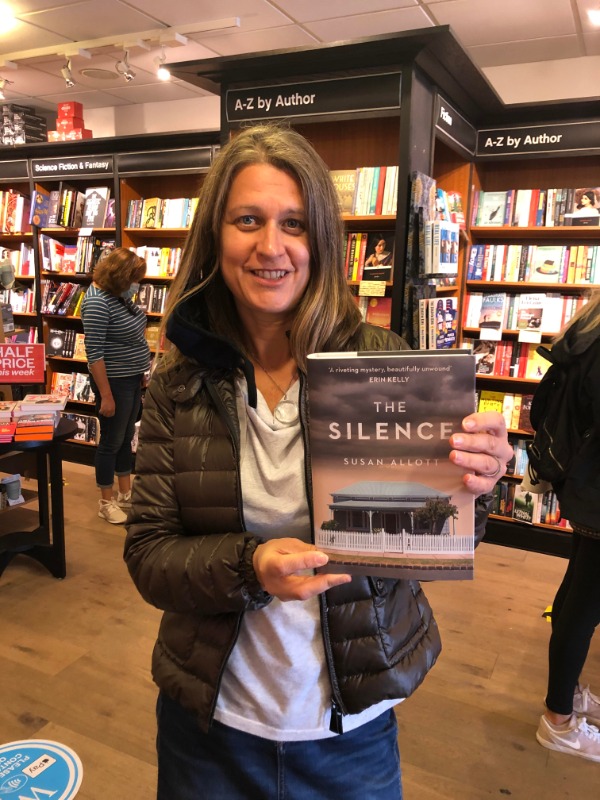 Susan Allott
It seems inevitable that a writer is likely to have been a bookish child, with a love of reading and creative writing. But it appears only the lucky few can turn a lifelong passion into a career, since ‘life’ usually gets in the way.

It was this way for Susan Allott, author of The Silence which was published this August in hardback, having been delayed due to the lockdown. Writing the novel, she says, was motivated by turning 40. She had already conceived of an idea and wrote the opening chapters, despite balancing this with full time employment which would leave little time, energy and inclination to enjoy creative writing.

For her birthday, she attended a writing retreat which really catalysed the desire to stop postponing the writing process. As with all things in life – there is always tomorrow, and when you keep postponing something ad infinitum, actually getting started gets more difficult each day. However, with her youngest child off to primary school that year and working part time, Susan suddenly found she had time to dedicate to the project, and embraced with relief her new-found ‘me-time.’

Her goal, initially, was just to complete the novel. She didn’t concern herself with the prospect of publication, even whether it would be any good. But, over time, she was increasingly drawn to the notion of getting published, and with each completed draft the dream became more compelling, pulling her from the duvet covers each morning when life was demanding and her day job unfulfilling. She lived for the days in which she could write undisturbed for hours.

The Silence developed from a short story, in which Susan created the characters and constructed their lives, developing a plot from there. She does not follow a precise writing process: she is character-led and the subject matter needs to spark her interest, but in writing The Silence it was to some extent exploratory. She has found that themes emerge through her writing, with them appearing from an unconscious place, rather than tailoring the narrative to encompass a given theme. It is perhaps intuitive; Susan doesn’t question why in The Silence she wrote on the theme of fatherhood – unwilling to “prod it too much in case its potency goes.”

She is conscious of always wanting to sound like her genuine self. Susan will delete anything she writes that she feels sounds too similar to another writer, or, as she puts it “some strangled version of literary”. Her preference is for “spare, economical prose.” Her creative aspirations are to remain brave, to write with emotional honesty, and above all, to “keep writing like nobody’s ever going to read it,” which can get challenging when a literary agent is waiting for the next draft!

For Susan,writing is an act of empathy. She says “you can emphathise with pretty much anyone, even if you don’t like them much and you don’t share any of their values. There are certain human emotions that we all experience, and we can tap into those emotions to understand one another.” She discovered this on reading The Slap by Christos Tsiolkas, a book that has heavily influenced her. She enjoyed the multiple points of view explored in the narrative and the way the author so convincingly “gets under the skin” of all the characters. On writing The Silence Susan discovered the work of Tim Winton, which opened the door to Australian literature. She has subsequently developed a deep fondness for the writing of Kate Grenville, Helen Garner and Evie Wyld.

However, whilst she has a ‘love’ of these writers, she does not let them influence her own writing style and sticks firmly to her resolve to write what could only have been written by herself. In terms of genre, she has said in the past that she writes what she herself would enjoy reading. When she embarked on writing The Silence she wanted to write a “well-written page turner” – and in that objective I would say she has succeeded – but I (personally) found it hard to categorise the novel into a specific genre, and so I asked. Susan responded by saying that it’s been described as many things – mystery, domestic noir… but she thinks the genre “literary thriller” is most accurate. She says it is intended “for people who like their books to have a compelling plot but who also enjoy a nicely tuned sentence,” essentially, then, precisely what Susan seeks in a good book.

Susan admires writers who can easily switch between style and genre and cites Ruth Rendell and her pseudonym Barbara Vine as an example. She, however, intends to stay within her chosen genre for the time being. Susan is already writing a second novel, one that is set in south-east London, about a young couple whose renovations unlock the history of their house. It is, she describes, a “spooky mystery/thriller” and the couple must stop history repeating itself if they want to avoid the same fate as the previous occupants. 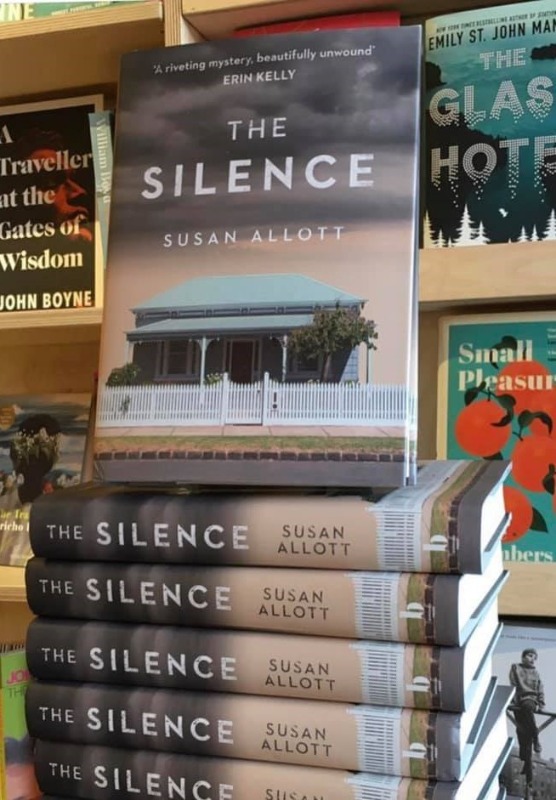 Susan is taking a different approach to her next book – trying to create a structure from the start. She tells me she has a firmer idea of the plot this time round and she is applying what she has learned through the process of writing The Silence. Thematically, she says, she still doesn’t know exactly what it will comprise, relying instead on her subconscious to direct her. It is still early days, but she draws confidence from the fact she has a strong concept of the plot, and how she will link all the strands together. Best of all, she is drawing inspiration from a property visible from her writing desk, so the impetus to write should never be far away.

During the writing of the The Silence she at one point found herself deleting half of the story; all her hard work gone in a moment. The Silence contains multiple narrators and Susan was told by those who read the early drafts that the character she initially chose as the central protagonist simply wasn’t compelling enough to hold that role. Terrifying though it was to hit delete after so many years of writing, with hindsight she knows it was the best thing to do. Without removing half the narrative, she would not have found her way forward, and so she is thankful for the early feedback, despite it forcing her to do what at the time she was loathe to do.

Most people probably assume that once an author’s book is published they can rest easy, feeling their work is done. Susan believes that this is only half the battle - once the hurdle of publication is surmounted, the next cycle of worrying begins: Will it sell? Will it get bad reviews? Will a second book be a possibility? Susan told us that having faced all the complexities that Covid and lockdown threw into the equation, she has a renewed sense of confidence in her own ability to tackle challenges head on, and having survived the chaos of the past six months, she is now resolutely determined to do everything she can to ensure her book reaches an appreciative audience.

She is thankful that she is now able to forge a career from doing something she loves. She was fortunate that her book sold to the publisher Harper Collins at just the right time. She’d been made redundant in November 2018 and when the news of a deal appeared in February of the following year, it was like a spot of sunshine on the gloomiest of winter days. Susan says she is now much happier in general and gaining in confidence. 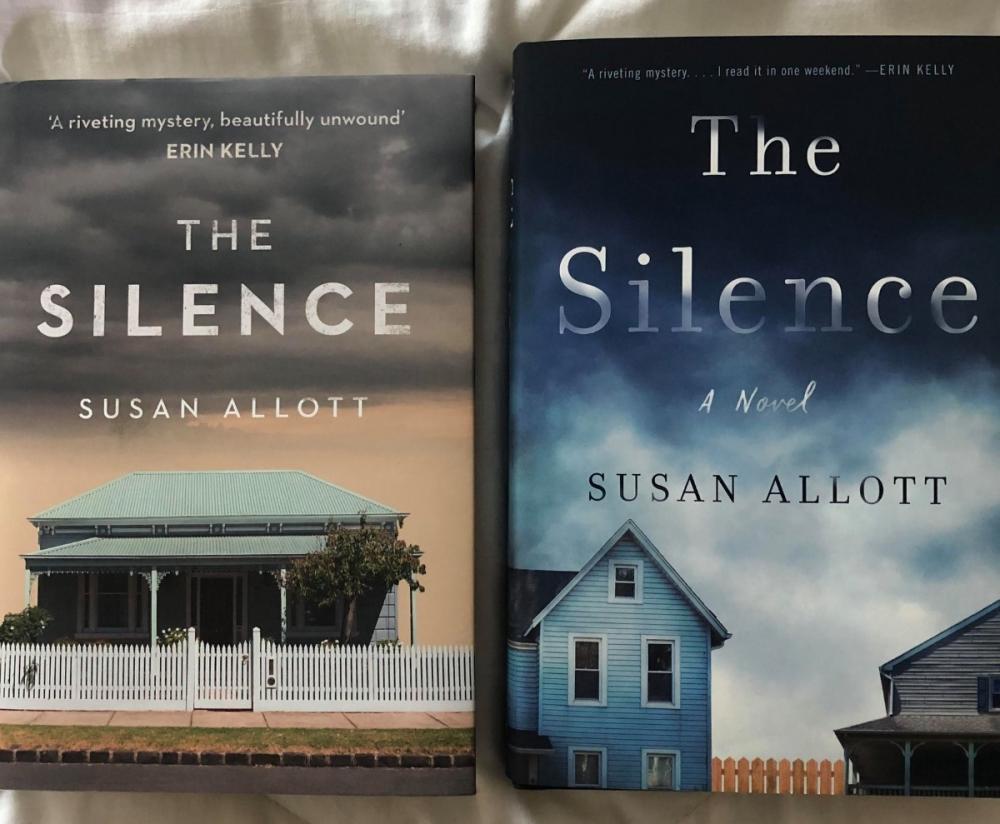 And it can be the little things that bring joy. She recently spotted a copy of The Silence sitting alongside Evie Wyld’s new book in the window of a local bookstore. To be placed next to her favourite writer was an unexpected delight, and she says it was “possibly my happiest moment…it felt like I’d finally made it!”

This year has been difficult for all debut writers. Susan remembers that when her book sold to Harper Collins, she was undoubtedly pleased, but the overriding emotion was one of relief. She remarks “I felt relieved that I wasn’t going to have to pick myself up and figure out what to do with my life.” Getting published, had, she said, seemed like such a long shot. She wrote for seven years before getting a literary agent and says that by the time the book went out to the publishers for consideration, she felt that she’d put so much time and energy into it that the stakes had become enormously high. The Silence was published in hardback in America at the height of the pandemic in May, and was postponed until August in the UK, but she says that the closure of bookshops due to lockdown has in many cases meant that books that have had years of effort invested in them will never see the light of day.

She has adapted well to the new circumstances – taking part in literary festivals, building a social media presence and of course working in partnership with other debut writers in their group Debuts UK 2020. One challenge for debut writers is making their voices known in a literary world already awash with so many well-known and respected writers. It’s true to say that some people prefer to stick with what they know. However - and I myself have experienced this recently - sometimes when introduced to a novel you would not otherwise have picked, it may turn out to be a good thing. Even Susan, who in the past has avoided joining a book club, not wishing to read what she hadn’t chosen, has found novels she’d otherwise have dismissed, through subsequent participation. There are some ‘classics’ that she has not read, but she doesn’t feel ashamed to say so. After all, she reads for the joy of the experience, and if a book doesn’t grab her at that particular time, she won’t invest herself in it.

When she isn’t writing, you’re likely to find Susan curled up watching boxsets and listening to podcasts with her husband and children, or walking, thinking and observing. She enjoys writing in cafés or, further afield, taking long train rides through Europe.
More articles in this series...
Interview: Bethany CliftLast One At The Party By Bethany Clift: A Review'There Is No Such Thing As Fate, Because There Is Nobody In Control': My Name Is Monster By Katie HaleInterview With Frances Quinn - Author Of The Smallest Man'A Hero Of Our Time!': The Smallest Man By Frances QuinnInterview: Thomas McMullan, Author Of The Last Good ManReview: The Last Good Man By Thomas McMullanInterview With Nikki Smith - Author Of All In Her Head'I Don't Know Who I Am Anymore': All In Her Head By Nikki SmithHannah Tovey: An InterviewInterview With Cat Walker - Author Of The ScoopThe Education Of Ivy Edwards By Hannah Tovey: A Review99 Not 42!: The Scoop By Cat WalkerInterview: Natasha Randall - Author of Love OrangeLove Orange By Natasha Randall - A Review‘Fate Brings People Together No Matter How Far Apart They May Be’: We Are Animals By Tim EwinsReview: She Came To Stay - Eleni Kyriacou'We Choose How We Treat Each Other' : People Like Us – Louise FeinInterview: Philip BowneAuthenticity Is Its Own Reward: Interview With Kirsten Hesketh, Author Of Another Us