Philip Bowne’s debut novel Cows Can’t Jump was published in September and is a comical if also poignant tale of teenager Billy’s eventful journey across Europe in pursuit of his adolescent love, Eva.

My take on the book, as my review reveals, is that it is about a youngster trying to make sense of an adult world that seems increasingly nonsensical, and for Philip Bowne, it is a book that could carry a positive message for a lot of young men who feel suffocated by a lack of opportunity in the current climate. He’d “be delighted”, he says, “just to bring a smile to (a reader’s) face”, but on a deeper level, he feels, his novel might suggest that a person can, with hard work and determination, break out of “that miserable cycle and do what you want”, before adding, dryly, “at least we could, in 2016!”.

Bowne studied English Literature and Creative Writing at university, having enjoyed writing from an early age. He says his writing would often manifest “all kinds of nonsense” but with encouragement from readers of a blog he published, he began to consider whether writing could become a serious vocation. At university, however, he found the pressure of submitting written pieces to group workshops almost unbearable and considered dropping the Creative Writing element of his course. However, with supportive tutors, especially Mike, who talked him into sticking with the course, his confidence grew and on publishing his first short story aged 19, he says he “was totally hooked.”

He doesn’t write “because I had some preconceived purpose about what I wanted my writing to do or say. I just wanted to tell stories that people could enjoy. I wanted to create characters you could laugh with, or at, but get behind and root for as well.”

His university tutor and now dear friend Mike is someone Bowne considers a big influence when he thinks of who or what led him into writing, but of course, he draws influence from other published authors. He says he loves “a lean, simple writing style. Nothing too flowery or OTT”, and to quote George Orwell and his Six Rules for Writing - “Never use a long word where a short one will do”. This rule acted as a gamechanger for Bowne (who says his vocabulary isn’t extensive), and on discovering works of literature that adopted a lean and simple style it removed the pressure he placed on himself to produce ‘good writing’ and the fact that he “didn’t need to know every word in the dictionary to write well was very helpful!”.

Bowne has enjoyed and drawn inspiration from the work of writers such as John Fante, Willy Vlautin, George Saunders, Kurt Vonnegut and Annie Proulx, amongst many others. On discussing the process of plot creation for Cows Can’t Jump he cites Conrad’s Heart of Darkness, noting that he was loosely inspired by Joseph Conrad’s ability to “pull the reader up the river Congo” in pursuit of Kurtz, only to comment in the same dry manner that “Heart of Darkness is probably the strangest book to talk about in the same breath as Cows Can’t Jump!”.

His own writing style is, he says, frenzied: writing his first novel was helped by natural enthusiasm, despite a lack of clarity and he tells me he carved out a narrative from a “very long, messy first draft”. He wrote several major landmark scenes which acted as checkpoints around which to orchestrate the plot, but he found these at first too overbearing. However, on completion of the first draft he was able to identify themes and characters he wanted to expand upon. But, as other debut writers have said, it was never a straightforward process with a predetermined plan of action.

One aspect of writing and publishing he hadn’t considered was how long the process may take to secure a publishing deal and then get the book to print. He struggled at first to get an agent, wondering whether he was being overlooked or not taken seriously as a young writer (he has just turned 27) and whilst the editing process was “awful” he believes the submissions process was worse, being “painfully slow” – sometimes taking months just to receive a response. It has taken almost three years since completing the novel to seeing it published and it has been a tough journey at times: he has had to learn to manage his own expectations, with several false starts along the way. 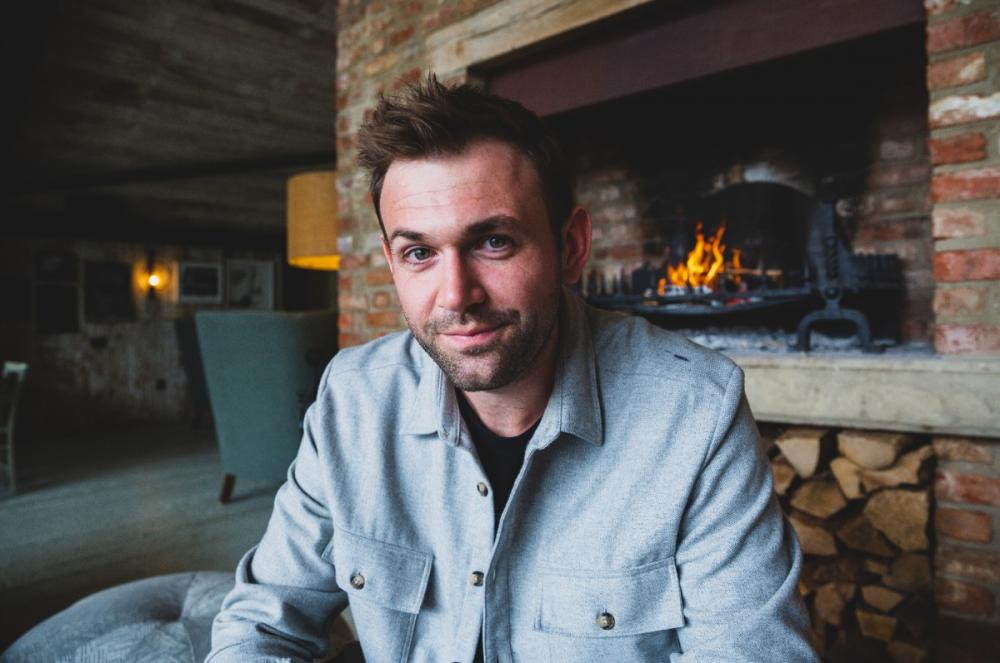 Philip Bowne
Bowne loves stories about ordinary people, “underdog stories about ‘down and outs’ overcoming adversity” and his favourite novels include John Williams’s Stoner, HHhH by Laurent Binet and Charles Bukowski’s Ham on Rye – they all resonate for different reasons.

Bowne feels his own literary voice changed through the process of editing, and whilst the voice of Cows Can’t Jump is quite distinctive, it wasn’t a conscious expression for Bowne. He wants to write “fun, engaging storylines with occasional flashes of lyricism” and in future would like to embrace more descriptive language, especially to depict the landscape and its beauty, something he could do through a third-person narrator.

Until recently he has been so busy with activities leading up to the launch, and the publishing process in general has left him little time for creative expression, but he does have a few ideas for a second book. The publishing process he describes as “an exhausting sap on my creativity” but he has discovered he is more determined than previously thought and his confidence has grown, despite harbouring concerns for what people will think of his writing. He would also like to write for TV or film but for now, as a day job, he writes for The Wombles, a children’s entertainment brand – something he says is as fun as it sounds, if not also slightly silly.

However, he feels the messages the brand conveys in “small digestible stories” are important, particularly on the theme of the environment – providing inspiration to the next generation. He feels that in the current climate, life has lost its nuance and everything has become binary, even tribal: right/wrong, leave/remain, vaccinate/anti-vax. So, books are important to Bowne in that they show us that things aren’t that simple, that there are many factors to consider, there are arguments for and arguments against and it is important to consider other people’s perspectives. Books can offer solace, and of course entertainment, and Bowne feels he uses comic writing as a both a “coping mechanism” and a “tool to try and process or understand things that are much bigger than us”.

In Cows Can’t Jump, which is set in 2016, Bowne didn’t want the referendum to dominate the narrative, but as a significant event, he wanted to convey the impact Brexit would have on young people. Bowne’s protagonist, Billy, has a sense of “confusion or apathy” and really, it interests him very little.


Also by Caroline Spalding...
Review: Ordesa - Manuel VilasLast One At The Party By Bethany Clift: A Review'There Is No Such Thing As Fate, Because There Is Nobody In Control': My Name Is Monster By Katie HaleInterview: Thomas McMullan, Author Of The Last Good ManReview: The Last Good Man By Thomas McMullan
In response to the novel, Bowne tells me some have found it very funny, but others have found it desperately sad. He tells me that whilst trying to create scenes that were superficially daft, comic or ridiculous, underneath they touch on more serious themes such as prejudice, anger and dysfunctional family life.

So this connects with some of what I perceived from Cows Can’t Jump: there is a serious foundation to the prose – be it Brexit, or preconceptions – and Bowne thinks that “tragedy is a necessity for comedy”, citing a reference of unknown origin to the effect that “comedy equals tragedy plus time”.

The title, Cows Can’t Jump emerged from a short story he began in 2015 that was centred around his protagonist, the same Billy of the novel, who meets a Swiss farmer who, in turn, is convinced that his cows are committing suicide by jumping from a cliff because he has somehow upset them. The short story became his dissertation and it evolved from there, with inevitable changes along the way, but we can see how this central event – cows committing suicide, both tragic and comic – adheres to the notion outlined above.

Bowne has spent a lot of time in Europe, working, for example, in the former ‘jungle’ refugee camp in Calais for the charity Care4Calais and some of the places he has visited feature in the novel. However he says that “the conflict and trauma (Billy) experiences (are) not based on my life at all – thankfully” but he has used anecdotes and references to real life because he feels that is what adds a “sense of authenticity” to creative writing.

When not writing, Bowne enjoys regular trips to the theatre or comedy nights and is a season ticket holder at West Ham. In these uncertain times, and approaching the long nights of winter, Cows Can’t Jump, is a heartening demonstration of how comedy may be found and enjoyed even in the darkest of times.


Cows Can’t Jump was published in September by Neem Tree Press.
More articles in this series...
Last One At The Party By Bethany Clift: A Review'There Is No Such Thing As Fate, Because There Is Nobody In Control': My Name Is Monster By Katie HaleInterview With Frances Quinn - Author Of The Smallest Man'A Hero Of Our Time!': The Smallest Man By Frances QuinnInterview: Thomas McMullan, Author Of The Last Good ManReview: The Last Good Man By Thomas McMullanInterview With Nikki Smith - Author Of All In Her Head'I Don't Know Who I Am Anymore': All In Her Head By Nikki SmithHannah Tovey: An InterviewInterview With Cat Walker - Author Of The ScoopThe Education Of Ivy Edwards By Hannah Tovey: A Review99 Not 42!: The Scoop By Cat WalkerInterview: Natasha Randall - Author of Love OrangeLove Orange By Natasha Randall - A Review‘Fate Brings People Together No Matter How Far Apart They May Be’: We Are Animals By Tim EwinsReview: She Came To Stay - Eleni Kyriacou'We Choose How We Treat Each Other' : People Like Us – Louise FeinAuthenticity Is Its Own Reward: Interview With Kirsten Hesketh, Author Of Another Us'Heaven Knew The Boundaries Were Blurred': Kirsten Hesketh - Another UsInterview: Susan Allott