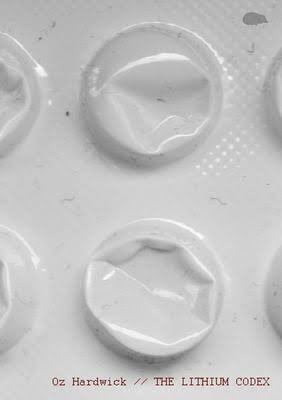 You might think that an interior examination of excess, of ‘mental streaming’, of a following of impulses without restraint, is evidence of a solipsism which is culturally apposite to an artistic zeitgeist turned in on itself. Descents self-conscious and unpoliced, bolstered by the perceived relevance of current cultural preoccupations, amount , often, to cries for attention, like so many upturned beaks in a nest of chicks. You don’t doubt the sincerity of the cry - you question its distinguishing features in the overall choir of complaint.

And sometimes you don’t. The obsessive inspection of self is a no doubt reasonable response to a world fragmenting around the poet and the artist, never more so than in the terrifying immediacy of our present circumstances. And in the realm of individual exceptionalism you might find astonishingly acute metaphors for the bigger picture which shapes it, sharpening its alarming appearance or underscoring its existential significance.

Better to trust to uncertainty, though of a sort which is fully aware of its own limitation to nose, even at a snail’s pace, towards the threadbare domain of self-knowledge. The more I accustom to the work of Oz Hardwick, the more elusive it becomes. His preference for the prose-poem form is an honest yardstick of his own willingness to venture into a liminal space; and in it, he finds a glittering ball of light which spins out, as it revolves, a spectrum of colour and insight through which concrete definition is irrelevant.

To the criticism that his work is determinedly introspective, he proposes a multiplying range of tiny synaptic charges which connect and disconnect with observed and imagined realities; the colours and lights hurtle about like atoms in a nucleus and there is pleasure to be taken in a strategy of sheer inventiveness. In this microscopic, macroscopic universe, critical judgement is suspended on linguistic verve, brave agglomerations of metaphor, and the feeling that Hardwick’s narrator is clawing desperately for escape. Here, revisiting a conceit from his earlier collection, House of Ghosts and Mirrors, the poet’s mood is claustrophobic and dream-like:


‘It makes me think how i’d just returned to work from a
long illness, in which I’d been buried in the cellar of a
house on the coast, tended by all the women from
three
generations of my family as my body’s geology shifted,
destabilising foundations.’ (‘Fit For Work’)

It is significant, as Hardwick’s kaleidoscopically suggestive ‘Afterword’ implies, that at least one of the ‘conversations’ informing his febrile judgement is ‘with the dead who won’t let me sleep.’ For there they are, throughout this sometimes frightening tableau of insomniac reflection, the shades who are as integral a metaphor for anxiety as the ‘chemicals and compounds’ which act as its handmaiden and catalyst. But when the exploding mind fragments like a mirror, they bring a kind of consolation, grounding airborne thoughts in the quotidian continuity of ‘a lock of my mother’s / hair, kept safe against all eventualities’ (‘Branch Line’). 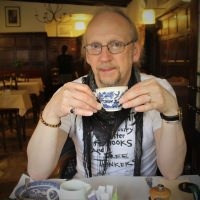 Oz Hardwick
It is well for Hardwick’s narrator that he has wreckage to cling to – his mother features elsewhere in this violently fevered anthology – for he struggles, in the most profoundly affecting way, to maintain coherence. The beauty of Hardwick’s abstruse take on what he sees is a measure of his own susceptibility to the world’s impenetrable strangeness. His is more than a poet’s voice; he is the conduit for an unfolding emotional, highly visual, odyssey.

And a talisman hangs over proceedings, disabling temporal direction, as though the narrator was journeying in an uncalibrated time machine. The sense of tripping through aeonic landscapes is inherently uncontrolled: one plane may sustain the appearance of different eras and experiences randomly, as if Hardwick’s psycho-geographer – for here is the essence of his poetics – was quite naturally given to communing with the dead. His depictions of these parallel worlds are breathtakingly resonant in authenticity:


‘Edwardian coming-of-age novel, with all its overgrown
melancholy and prim desires. There’s a steam train with
a soldier waving, a hothouse gripped tight by vines,
charcoal nannies perambulating silent babies, and every
chimney holds the bones of a nameless waif who now
sings in the whitest heaven that ever sailed the Empire. (‘Paper Roses’)

Also by Steve Whitaker...
Poem Of The Week: 'Treat' By Thirza CloutPoem Of The Week: 'July' By Alan PerryReview: A History Of Solitude By David VincentPoem Of The Week: 'Still Life' By Diane AckermanPoem Of The Week: 'Touch' By Michael Donaghy
An inhabitation of contemporary cultural mood as much as outward appurtenance, ‘Paper Roses’ is effortlessly immersive, and the trope is rehearsed again and again in The Lithium Codex, a signifier of Hardwick’s inability to escape the material condition of his own protean incarceration. Another poem, ‘Recalibrating the Mareograph’, gives synoptic definition to the problem, if problem it is. A protracted metaphor emerging in an endless drift of waves – a Mareograph is a tide gauge – the poem directs the tectonics of pre-history (‘I collect / shells that wash up on mountainsides’) towards the memory of a home which is as insubstantial as the ocean’s shifting horizon. ‘We carry the coast wherever we / go’, says the narrator, underwriting a singular certainty: that our past, along with its ghosts, follows us.

That Hardwick is the ‘Cartographer’ of his poem’s title, the mapper of unchartered waters, is an admission of a failure to prevent the conflation of time and place, the crossing of mental borders where objects are juxtaposed because they share no common argot beyond that which is construed in one mind, ‘the post / offices become libraries, museums become motels, /swimming pools become cinemas’. The poet cannot assuage the impulse to (re)visit territory in which he has no material power to intervene, like a traveller from the future.

The lithium that mediates an accommodation between catastrophic extremities of mood may or may not yield a clue to Hardwick’s raw, complex poetics; yet however damaging the condition and the ‘cure’, Art finds amalgam betwixt two poles – the leaves of a ‘codex’, the poems on each page, embody a rational response to conflict, conferring the residua of meaning on anxiety:


‘Everything is song, from the birds to the bricks: houses
sing favourites from the early 80s, lyrics gaining strata of
meaning in retrospect. He phones his dead mother to
hear her answerphone voice, and she sings back lines
from Hoagy Carmichael, Spike Jones.’ (‘Lithium Soundtrack I’)

The working through of memory as though lately experienced is the re-rehearsal of a mood or an inference. Hardwick tries, here, to describe an abstraction, a sense of something usually beyond the power of words to relate, like déjà vu. And, in the later ‘Lithium Soundtrack II’, a re-awakening, a re-discovery of the physical self, is accompanied by a reflective visual entropy bordering on synaesthesia:


‘A mattress on the floor and towers of unshelved books.
The night slips through another crack in the floorboards,
a Sinatra melody that lives in your head though you’ve
not heard it since you can’t remember when.’

The inveigling of the past into the present is as overwhelming as to render distinction meaningless in Oz Hardwick’s poetics. Memory remains barbed, palpable in perpetuity. The mouths full of cinders and the burning texts of discord in ‘Flame Grammar’ find spurious resolve only in terms of the simulacrum of ash’s propensity for speedy reduction. The ironic effect of protracted pain in The Lithium Codex is to dissolve the narrative self. ‘Mistaken Identity’, one of the final poems in this unusually powerful collection, describes, in its ambiguous brevity, a ballad of sublime disconnection which is not without hope in its anonymity:


‘We stopped to listen to a busker
-or a policeman, or the river singing beyond the locked
park gates – but when I dipped into my pocket for
change, all I found were hailstones and clipped tickets
for cloakrooms and provincial zoos.’


The Lithium Codex is published by Hedgehog Press