‘I’m Conscious Of Being Part Of A Literary Culture Thriving In The North’: Liam Bishop In Conversation With Naomi Booth

Naomi Booth
Paloma Varga Weisz’s exhibition, Bumped Body, was showing at the Henry Moore Institute before the gallery closed in the lockdown again. As I load up Zoom for my conversation with the novelist Naomi Booth, I think of Weisz’s Wilde Leute (‘wild people’). It wasn’t the fantastical exploration of the body in the small terracotta figures that struck me (although, along with Weisz’s other sculptures, they did make me think of Booth’s pre-dystopian nightmare, Sealed, where - ahem - a virus seals people in their own skin), but it’s the sense of a clan thrown together like a ‘family album’, as Lizzie Donegan described them in Medium, ‘stopped in time, mid-metamorphosis’. In Booth’s Exit Management (Dead Ink Books), a novel of fracture and dissonance, there’s an unlikely trio who might be hoping for something like metamorphosis.

‘I wanted to base the novel on an inter-generational relationship that isn’t biological family’, Booth tells me, ‘József has been romanticised by Callum, but I purposefully never give Józsefs point of view in the novel. So I think he is constructed by Lauren and Callum very differently. Callum reveres and respects the fact that József arrived here when it was possible to move and build a life in London’.

József, a Hungarian immigrant and art dealer who moved to London after the Second World War, presents to Lauren and Callum, two mid-twenty year olds stuck in soulless jobs (Lauren’s vocation of managing redundancies and sackings lending itself to the title of the novel), what it might be like to enact and not only desire a different outlook in life. But I wonder if Booth, raised in Dewsbury like Lauren, might be an artist who considers herself mid-metamorphosis. Gone has the urgent omniscient voice that lent itself tropes from the horror genre in Sealed (Dead Ink Books, 2017) to make way for something that is potentially inspired by an artist József claims to have met. I remind Booth of a passage from Exit Management:

‘[Cal is] telling her about the studios in St Ives that József used to visit and how this work is from the ‘50s, the very beginning of [Barbara Hepworth’s] period of curved abstract forms. The details come so easily – even some of the exact phrases that József uses: Hepworth was anti-naturalism; she works to produce fundamental shapes; to make the impersonal individualised ’ (Booth’s italics).

‘This is more than a throwaway reference,’ I say to Booth, ‘“Curved, abstract forms”, might be yours and Hepworth’s specialty’. 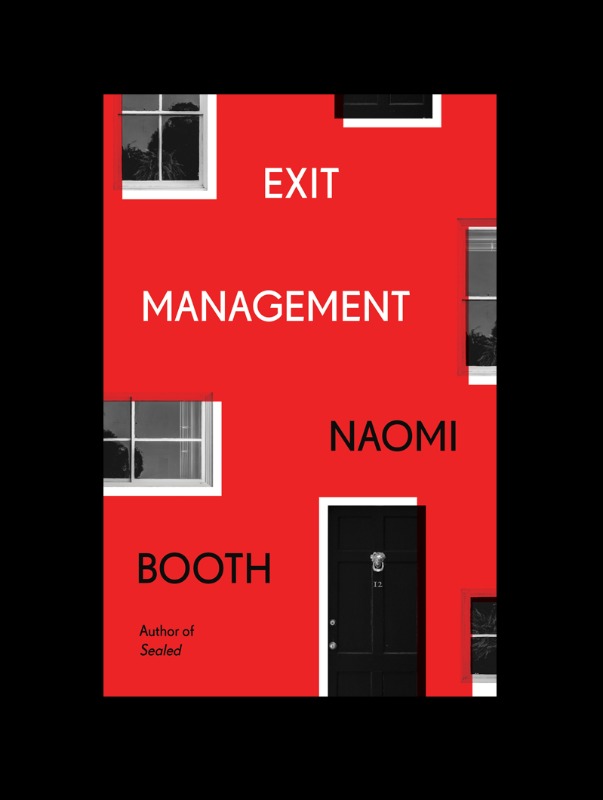 ‘I am fascinated by Barbara Hepworth. She was negative about the idea of a “too Northern conception”, and I thought quite a lot about what that could mean for a piece of art. Obviously, Hepworth is really interested in “universal shapes” and the possibility of producing a “fundamental shape” in sculpture that has a “universal power.”’ Booth sips water then says, ‘Hepworth has this amazing ambition when she leaves the North to make pieces of art that could be made and speak to people anywhere: I think I might be working against that.’

Booth works against the building blocks of the novel itself. Sentences clip and jag, and articles are foregone to create prose that is reflective of a Yorkshire vernacular as well as Lauren’s traumatic past.

‘I’m fascinated by that conception and tension between trying to produce something that you might think of as a universal shape, and a very specific spikiness that might work against that idea. I think it comes down to creating a specific situatedness of people in a place and time, and their speech patterns of that place and time. I’m interested in locations that might be thought of as on a knife-edge.’

The potboiler term surprises me. I ask Booth to explain more. ‘Lauren’s experience isn’t a portrait of a town, it’s a tiny experience of a town from someone whose experience was so brutalising that she didn’t even get to know that town.’

If it is a knife-edge Booth revels in, we might say she chops Lauren’s distressing history into the present, and as discomforting and disorienting as this is for Lauren, so too it is for the reader. Does Booth, however, think she’s in danger of painting another grim picture of the North?

‘London, for Lauren, imaginatively represents the chance to escape and live a new life and be independent of the things that have happened to her in the past. But that is a very naïve view of London. She’s left Dewsbury as soon as she can and, in a sense, she doesn’t really know Dewsbury as she only had her childhood there. I don’t think Lauren’s an every woman of the North, she’s not going to go for a walk in the Pennines and appreciate the glory of the Northern landscape. Dewsbury, after all, is not one of the success stories of the North, and it’s one of those areas that has been particularly badly affected by decades of well...’, Booth stops to laugh - ‘I’m not allowed to blame everything on Thatcher, but what was once a thriving town with a strong sense of civic pride has seen that eroded and depleted through the twentieth century and into the twenty-first. Lauren’s had a very specific set of experiences. She’s a survivalist’.

The depiction of a ‘survivalist’, hand-to-mouth, and ‘local’ experience is something her writing shares with fellow Dewsbury-born writer David Peace. The local experience, both geographically and experientially, is fundamental to Lauren’s narrative, and it provides a platform for Booth to examine universal truths. Booth’s publisher, Dead Ink Books, are also building this platform. As Booth receives national coverage for Exit Management, Dead Ink, along with other publishers in the Northern Fiction Alliance (NFA) striving to form a model of publishing not reliant on being in the capital, are beginning to reap the dividends of promoting new exciting work published in the North of England.


Bumpman - The Henry Moore Institute
‘This is what I was trying to say earlier about there not being one experience of the North: people might think about writers in the North as people who write about sheep farming or bleak post-industrial towns, but if you think of the work these publishers are doing, Peepal Tree, Titled Axis, you know, I’m conscious of feeling part of a literary culture of experimentation that is thriving in the North’.

As Booth alludes to, the NFA isn’t solely publishing writers born North of the Midlands. Peepal Tree Press, based in Leeds, are the world’s leading publisher of Caribbean and Black British writing: Tilted Axis have published books translated from China and South Korea this year alone.

In a year that has tested and challenged the popular imagination, the diversity and boundary-testing of this literary culture is arguably more essential than ever in finding new ways in which to come to terms with our darker imaginings. Booth’s work typifies that quality of - whether she’s writing about the near past or far future - uncannily resonating with the zeitgeist, and it’s fitting that she finishes by telling me about her discovery of newt populations disastrously affected by a condition very similar to the virus ripping through the community in Sealed
.
‘It’s been an absolute catastrophe for newts: it’s called chytrid and it’s sealing them into their own bodies, causing at least ninety species so far to go extinct. You think you’re imagining something horrible in a work of horror, but it’s never as horrible as the things that are actually happening in the world’.

By preventing sufficient uptakes of salts through the skin in newt and other amphibians, chytrid is a fungal disease that can spread by touch or in the water that they share with other amphibians. Dan Greenberg, a biologist and Ph.D student at Simon Fraser University, said to the National Geographic:
.
‘In some respects, it’s the perfect pandemic recipe…if it were a human pathogen, it'd be in a zombie film.’

Admittedly, when I do walk into the re-locked down city that evening, of all the things I could be thinking about, I find myself obsessing over the plight of those poor newts. But something catches my eye. The city is largely vacant except for the figure sat outside the Henry Moore Institute: it’s Bumpman, a sculpture of Weisz’s. As its name suggests, its blistered and watchfully posed body sits on a bench in the cold, as it has for most of the year.

For more information on the Northern Fiction Alliance, visit: http://northernfictionalliance.com/

The interview was conducted by Liam Bishop