Hearts Of Darkness: Lord Of The Flies By William Golding 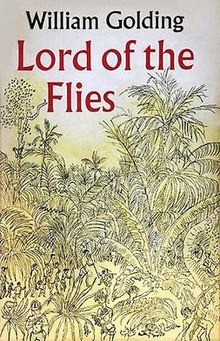 Original book cover of UK version
This is one novel I read when I was at school, and have since taught several times as an examination text, but it is a book which never fails to engage me and each time I read it, I find something new to consider. I picked it up yet again this week and have not been disappointed. Don’t dismiss it because you think you have read it before - it is well worth a second go, or even a third, with a more open mind perhaps, and more life experience to bring to your understanding. Kingsley Amis described it as ‘terrifying and haunting’ while E.M. Forster said it was ‘tragic and provocative’, and I say, ‘well said’.

To put the novel into context, Lord of the Flies was published in 1954, less than ten years after the end of the Second World War. The author, William Golding, had been in the Royal Navy during the conflict and had seen what brutality mankind could inflict on itself. There is no need to detail that here. As he was a schoolmaster, both before and after his naval career, he also understood the nature of young boys. His novel sets out to show how evil and cruelty lurks within the heart of every individual.

At the dawn of an unnamed war and after an atomic explosion, a plane carrying a group of schoolboys crashes on an uncharted island, killing the only grown up, the pilot. At first, with no adult supervision, the boys celebrate their freedom in their new-found paradise. This far from civilization, the boys can do anything they want. Anything! But just as in Eden, there is an interloper, ‘a snake-thing…a beastie’ which rears its head and whispers in their dreams and the boys soon gain knowledge of good and evil.

They attempt to forge their own society, but the leadership is divided. The ‘toy of voting’ sees Ralph elected and still connected to the outside world; in his mind at least, he wants to establish rules. He stands for the values of civilisation, represented also by the conch shell which had been used to summon the boys together. He sees the need for a signal fire so they can be rescued by the adults who, he is sure, will be searching for them, and he wants to build shelters. He listens and tries to calm the ‘littluns’ who are easily scared. 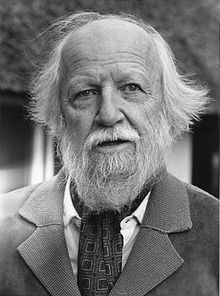 William Golding in 1983
Jack is not happy to have been defeated in the leadership battle and sets up a rival group. He is only interested in hunting and promises a feast to those who follow him, appealing to their desire for fun and self-indulgence. Power crazed, and with his cruel desire for mastery, Jack becomes increasingly dangerous. His hunters, ‘with painted faces’ who carry ‘a stick sharpened at both ends’, eventually choose to give in to every instinct and impulse, no matter how barbaric, and so his ‘tribe’ grows.

As order collapses, the reader witnesses the boys’ descent into savagery and terror begins its reign. Civilisation no longer has any meaning as signified by the shattered conch. The hope of adventure seems as far from reality as the hope of being rescued. Whether it is a parable, an allegory, or a morality tale, Lord of the Flies is a memorable novel with a nightmarish quality, about how humanity behaves when left alone without societal rules and structures. With the death of one of the main protagonists, Golding depicts “the end of innocence, the darkness of man’s heart”. And that is not the only death.


Also by Artis-Ann ...
The Greatest Doublecross In The History Of Espionage: Our Friends In Berlin By Anthony Quinn‘Goddesses, Housewives Or Whores’: Women Of York By Claire Shaw‘You Have To Know Your History If You Want To Put Things Right’ : Charity By Madeline DewhurstPractise To Deceive: Transcription By Kate AtkinsonJamaica Inn By Daphne du Maurier - A Review
This is realistic dystopian fiction – even if the dialogue is a little dated at the beginning. The boys act in accordance with what they have seen in the world and they don’t understand limits. Violence becomes the way to achieve what they think they want. They go to war amongst themselves and in doing so, lose their childhood innocence. They grow up and learn how far humans can go when pushed. Golding takes it further and challenges the stereotype by creating monsters, or savages, from children who all too easily give in to their most basic instincts despite their ‘fancy education and gold-plated upbringing’.

This is not Swallows and Amazons, nor Coral Island; it’s not an adventure book about some stranded children having fun. The title, a translation of Beelzebub, says it all, as the boys learn that the devil is within Man. Their fear of ‘the beast’ runs deep and so it should. The atavism which occurs demonstrates Golding’s belief that we are not so far from our primal nature, and it takes very little for us to embrace our darker side.

There is symbolism throughout - the fragility of the conch, the nightmare of the beast, the contradiction of the fire, which provides both comfort and terror, the utility of Piggy’s glasses. There is irony, too, in the reminder that while the boys have been on the island, the adults, far from being civilised, have continued waging war for no discernible reason, suggesting that humans are inherently prone to self-destruction. I could go on, but I urge you to read it for yourself; feel the rawness of the tears of the children in the final scene, tears of grief as much as joy, and realise that humans cannot eradicate evil but must continue the struggle to stop it becoming the dominant force in life.

Lord of the Flies was first published by Faber & Faber