He Ain't Heavy, He's My Brother: The Comic Short Stories Of Anton Chekhov 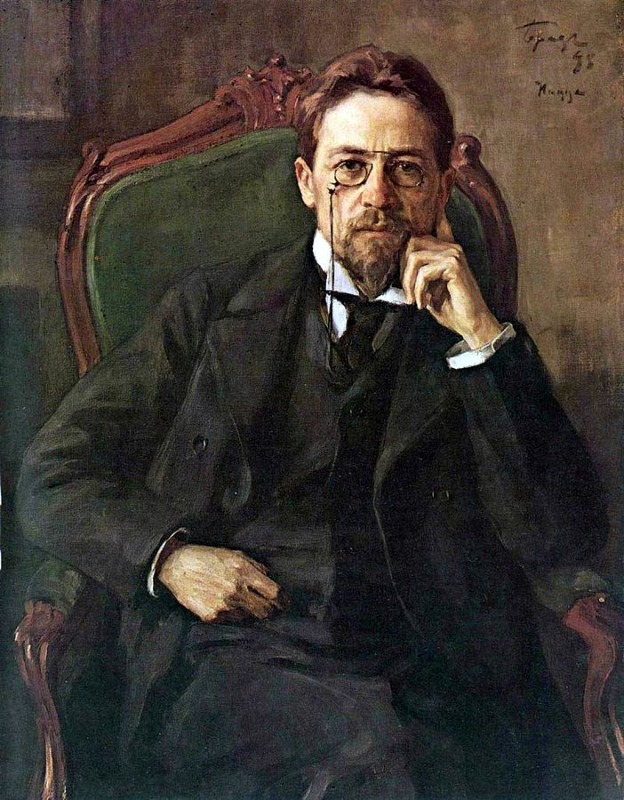 Chekhov by Osip Braz
Perhaps when we consider Chekhov, our first thoughts may not gaily run to whimsy, frolicsome mirth or indeed lighthearted, playful satire. Conversely, we might recall The Cherry Orchard, The Seagull, Uncle Vanya, Three Sisters or Lady with the Dog. Chekhov’s (1860-1904) works mirror Russian life authentically, warts and all. His gloomy, gritty realism seen as an intellectually intimidating, semi-permeable reflective prism between the observed and the observer. His work an unflinching, but dextrously modulated exploration of dank humanistic truths only leavened by perspicacious satire and affirmative notes of fatalistic compassion.

For many, Chekhov is synonymous with ‘heavy literature’, work to be gravely venerated rather than playfully engaged with. Sadly, our Russian maestro’s delights are often considered the preserve of press-ganged students, the erudite denizens of unassailable academic ivory towers and those with a predilection for worthy intellection of only the most demanding stripe. I am put in mind of the deferential, faintly tremulous attitude taken to an esteemed vintner’s vaults by anyone but the most experienced oenophile or cognoscenti of bacchanalian delights.

Literature like fine wine can be appreciated by all, with the added advantage that it does not come with an eye watering price tag! Again, like wine, some vintages, varietals and artisanal styles are indeed heavier than others, however ‘heaviness’ is not a universal sine qua non of fine wine, nor can a ‘lighter’ style be dismissed by dint of an absence of tannins, age or indeed perceived value.

My point is that Chekhov made both exquisite white and red wine, his early career an experimental period allowing him to find his style, refine his art and dextrously apply his learnings to his later productions. Chekhov’s idiosyncratic excellence permeates his early works and comes to full creative fruition in his later canon. Sampling his earliest offerings is intrinsically satisfying by dint of the sheer brilliance of his wit, gentle satire and technical virtuosity. The corollary of meeting the inchoate master in an early guise, is that we gain a greater understanding of and appreciation for the genius he would become.

Critically acclaimed throughout his lifetime, winning the Pushkin Prize in 1888, he was given honorary membership of the Russian Academy of Sciences for both his fiction and his drama. His mature work is undoubtedly cerebral, profound and often challenging. Celebrated for its illustrious luminosity, his later works draw their force from a deep well of technical brilliance, humanistic acuity and deft poetic sensitivity. However, his early work contains many of these venerated traits and should not be dismissed or assumptively ignored. More importantly, by neglecting Chekhov’s early works we risk leaving the majority of his vast, magnificent cellar untasted!

The Comic Short Stories of Chekhov are a wonderful starting point for anyone wishing to titillate their literary palates with humour, wit and gentle observational satire, before perhaps diving into his grander offerings. The short story form may be traced back to ancient legends, mythology and folklore. As anthropologically universal as they are culturally diverse, they were initially passed down the generations orally, eventually finding written form.

By the fourteenth century, we see the now ubiquitous Arabian Nights or One Thousand and One Nights. Geoffrey Chaucer’s Canterbury Tales perhaps bridges the gap between us and the modern short story with fairy and folkloric tales published by the Brothers Grimm and the gothic fiction works of Edgar Allen Poe popularising and refining the form further. Chekhov, though, along with Guy De Maupassant are generally considered the fathers of the modern short story as we now recognise it, with Chekhov given top billing by all but…the French!

As an impoverished medical student, Chekhov turned his hand to a multifarious array of prose forms in pursuit of much needed funds. From 1879-1884 he led a double life: ‘I began contributing to the journals during my first year at university…and as a student had hundreds of short stories published under the pseudonym ‘A Chekhonte’, which, as you see, is very similar my own name. And not one of my fellow students knew that I was ‘A Chekhonte’, none of them was interested’. His father’s grocery business failed in 1876 and the family decamped to Moscow, leaving Anton at university and forced to fund his tuition and subsistence. His family and himself were entirely dependent upon income scraped from his writing and young Chekhov was compelled to have a bash at any paid scribbling, ‘except a novel, poetry and denunciations to the police’. 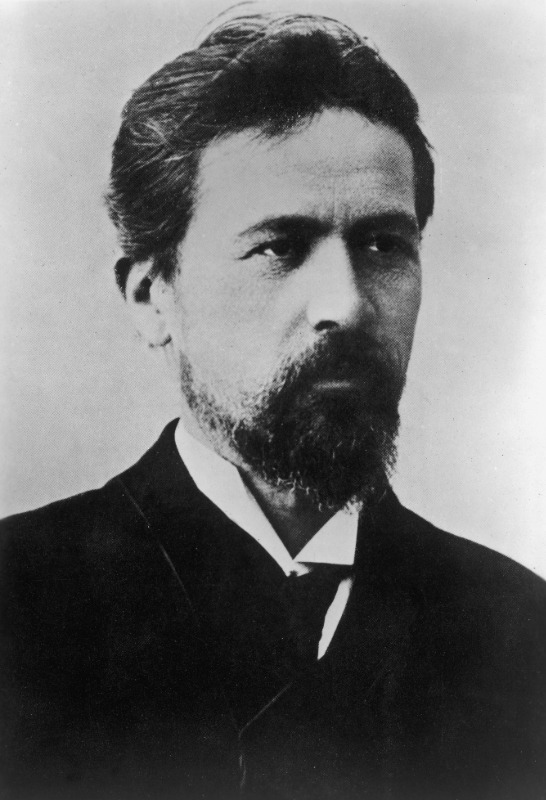 Anton Chekhov
He soon learnt to be succinct – ‘better to cut a story yourself than leave it to an editor’. A lesson this scribe has yet to learn ! Chekhov found his short stories all around him, inspired by downtrodden civil servants, peasants, and the characters populating his life in the 1880s. Humorous stories were in high demand by the popular press and Chekhov assiduously met demand with supply. Captions to cartoons, comic advertisements and announcements, menus, questionnaires paved the way to two- or three-page short stories.

Chekhov complied with a number of tacit literary imperatives, conventions deemed appropriate and indeed almost compulsory. Merchants, priests and civil servants had to be given silly names, parody was preferable to scorn. The comic diary or memoir was hugely popular and once again Chekhov converted demand to fill his coffers with tales such as ‘From the Diary of a Book-Keeper’s Assistant’ (1883).

He refused to be straightjacketed by editorial constraints reflecting the attitudes of their paymasters, and breathed his own original flare and approach into his offerings, stretching the boundaries of the comic genre without breaching them. An example of such creative inventiveness being ‘Zero Ending’ in which he blends comedy and pathos. By 1888 he had published an astonishing 528 short stories, half of which were comic in tone or spirit.

Many of Chekhov’s early stories derive their comic character by mining simple misunderstandings or the misinterpretation of the motives or behaviour of others. ‘Overdoing It’ (1885) is a fine example of this technique. This mutual incomprehension would become an oft utilised motif throughout the comic canon, later morphing into a far from comic desideratum of his later works. As his literary skills grew, nuance crept unobtrusively into his writing, colouring stories not with overt farce or comedy, but with ever greater satire and subversive lambasting of both people and institutions.

Chekhov took Gogol’s Akay Akakiyevich, the protagonist of his The Overcoat (1842) and explored the plight of the ‘little man,’ pretentious, incongruently pompous and lost in the catacombs of imposed outlooks, rules, regulations and expectations. As such, Chekhov investigated personal identity and all that both shapes and distorts our sense of who we are and where we belong in society. ‘Fat and Thin’ (1883) is both amusing and darkly aphoristic in that Chekhov examines rank and friendship and the fragility with which societal relationships are both formed and fractured.

Mimesis perhaps defines much of Chekhov’s method. His gift for ‘showing, not telling’ allowed him to create characters as risible as they were relatable, their verisimilitude the quintessential agency lending his portraits both form and function. Fundamentally, Chekhov had explored the highly subjective nature of individual reality and exploited his subjects’ facility for cognitive dissonance, their proclivity to believe self-actuated perceptions, rather than objective truths. ‘Kashtanka’ (1886) and ‘Grisha’ (1886) are superb examples of this deformed lens contorting reality with comical effects. Again, in later works this humanistic truth would become a far more tragic leitmotif and certainly not lead to farcical outcomes.

To his ever-expanding armoury of thematic and literary devices, Chekhov added another definitive ingredient…the absurd. He takes the world as it was known and inverts accepted conventions and associative behaviours, morphing reality into increasingly bizarre forms, their complexity exploited for mirth before being once again mined in his later work for its antithesis. ‘The daughter of Albion’ (1883) and more darkly, ‘A Drama’ (1887), in which a cliché-ridden play is parodied to disinter the interpretative abyss between its protagonists. Admittedly, we are given a bizarre climax and a comic twist, however this Chekhonte story foreshadows the far darker Chekhov to come.

Irony also scents the early works of Chekhov with gentle criticisms and modulated reprovals. ‘Ward 6’ (1892) lets us cringe as Dr Ragin ends his days as a patient in the asylum he once commanded with calm, inhuman detachment. In later works, irony is given sharper teeth as Chekhov vents his loathing for, and rejection of, authority, hypocrisy and vainglorious delusion. In short, Chekhov took the work of Chekhonte and utilised the tools he deployed for comedy to produce cathartic, redemptive understandings, tinged with fatalistic tragedy rather than whimsy-enriched amusement. 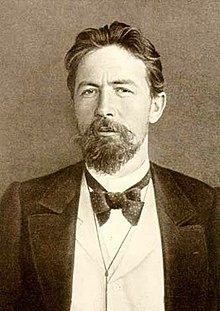 Chekhov
An interesting point to note is that A Chekhonte was a prodigious scribe, yet A. Chekhov as we more formally and more commonly know him, only published sixty stories between 1884 and 1904. Less is more could be one interpretation. Alternatively, the frenetic and necessary output of the younger man could be seen as an artist stretching his proverbial wings and learning to fly. In 1979, V.B. Kataev concluded that ‘it was in the humorous stories of 1884-7 that Chekhov found himself as an artist’. He explored his abiding belief that each one of us makes sense of the world, uniquely, differently and harvested the perhaps morbid truths laid bare by picking over the consequences of these different perspectives as they collided, or were forced into dynamic, yet artfully finessed confrontation.

My own encounter with A Chekhonte came in the form of Chekhov: The Comic Stories chosen and translated by Harvey Pitcher. Nineteen of the tales included in this wondrous gem appeared originally in Chekhov: The Early Stories 1883-88, a joint translation by Patrick Miles and Pitcher himself. The remaining stories are Pitcher’s pick and are reflective of both his erudition and passion for Chekhonte.

Pitcher believes that we do not ‘know the early works of Chekhov’ as a consequence of two prohibitive factors. Translating the short stories with their dialogue-heavy, grammatically-nuanced complexity has proven both difficult and unappealing. More significantly, culturally conditioned to worship Chekhov only at the altar of his great works, his formative offerings have been unwisely and unfairly degraded by the intelligentsia and supercilious critics pontificating from their loft eyries.

Chekhov once said, ‘Any idiot can face a crisis, it’s this day to day living that wears you out’. His comic short stories gloriously and humorously explore this truth with vivid whimsy, wit and gusto. Whilst his later works are justly acclaimed and their author given the status of a literary giant, reading the works of A Chekhonte will spread a smile across the face of any reader with a sense of the absurd, the farcical or indeed the macabre comedy that is all to often life itself. Chekhonte penned great literature…as Chekhov, he would simply change his name and the world would reverently capitalise the ‘g’ !


Also by Paul Spalding-Mulcock...
'We Shall Be Forgotten' : In The Palace Of Flowers By Victoria Princewill‘Grief Can Make People See Things In A Very Odd Light’ : Body On The Island By Victoria DowdIt's All Greek To Me !Review: A River Called Time By Courttia NewlandAn Interview with Alice Ash - Author of Paradise Block