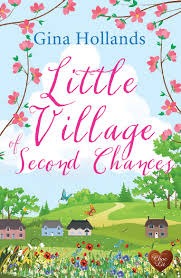 I have said before that my reading tastes are eclectic, from Chaucer to Agatha Christie and everything in between. I’ll give most things a go. The latest novel by Gina Hollands is the first of hers that I've read and it has to be said, Mills & Boon spring to mind - and there’s nothing wrong with that. Founded in 1908, Mills & Boon is the UK's number one publisher of romantic fiction and can still claim over three million regular readers in the UK, annually. As of 2008, 200 million Mills & Boon novels were sold globally per annum and, in the United Kingdom, one paperback was sold on average every 6.6 seconds. Their first avowed intent was to encourage reading (I’m all for that), and from the very beginning, Mills & Boon published in a form and at a price which was within easy reach of a broad readership. The company noted the growing appetite for escapism during the Depression years and answered it by moving towards escapist fiction, aimed especially at women. Yes, I have read the odd one! Mills & Boon were publishing over 700 new titles a year but have always moved with the times and electronic publishing has allowed them to double their output, releasing over 100 e-books per month; they currently sell more e-books than physical books.

The publisher has previously denied the accusation that they provide their writers with templates for their stories and has stated categorically that ‘authors are allowed full artistic freedom’. There are, however, generic conventions which need to be met. These books have great appeal to a certain readership and ‘predictability can be a key reason for reading’, so there is the inevitability of a happy ending. The simple writing style makes them accessible to many.

Now, back to Little Village of Second Chances which endearingly follows so many of the conventions of that highly successful genre. It is very difficult to find a new take on an old story, and romance is the age-old story. You have to have some kind of vehicle, however, if the reader is going to pursue a book to the end, and in this novel that happens to be the saving of a particularly beautiful Yorkshire village from ‘fat cat developers’.

Sarah Pickering has been sent on a mission by her company to persuade the residents of the fictitious village of Wetherstone-on-Ouse to accept generous offers on their homes, to make room for a by-pass which will provide better access to a proposed massive housing development close to their rural idyll and just outside the ancient city of York.

Shay McGillen is a resident farmer, who moved into the village from Ireland, to escape a grief-stricken past. He is determined to fight to his last breath for his farm which has been his solace and haven since tragedy struck five years previously.

The two meet on the first page when the heroine believes she is being threatened, at her own front door, by a man wielding a gun and ‘with a mean look on his face’. Discovering things are not what they seem and that she is not actually in any danger, the two begin ‘an acquaintanceship’. It’s not a long novel so there is not enough time for a slow burn and despite the inauspicious start, they quickly feel an affinity which both try to deny. 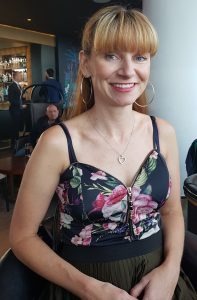 Gina Hollands
Sarah is a modern-day heroine who wants to prove herself as a capable, independent female but she is inexperienced in love. She knows she is falling for Shay but is plagued by insecurities, the reason for which is revealed fairly early on. Her purpose for being in the village also makes her his adversary, a fact she chooses not to share with him, too soon.

Shay is ‘roguishly handsome’ with his ‘tee-shirt stretched across taut muscles’ but is also damaged. The description of this ‘former fireman who is frightened by fire’ barely scratches the surface of his past. Ten years older than Sarah and strong, rugged and good looking, he fights the natural urges which threaten to consume him when in her company. He is known, locally, to be strong and silent, but of course, he has a softer side: he’s a successful flower farmer, specialising in edible blooms.

Both have known tragedy and realise they must move on from their pasts, however hard that may be, and this novel also touches on how to give yourself a second chance of happiness. The will-they-won’t-they scenario is set and the reader must follow the path which is anything but straight as Sarah has to come clean about why she is there and Shay has to battle his demons to save her life.


Also by Artis-Ann ...
Review: Fatal Solution By Leslie Scase‘The Grit In All Of Us. Every Writer’s Ideal Material’: Red Sky At Noon By Simon Sebag MontefioreReview: Not For All The Tea In China By Chris BurrowsThe Greatest Doublecross In The History Of Espionage: Our Friends In Berlin By Anthony Quinn‘Goddesses, Housewives Or Whores’: Women Of York By Claire Shaw
This is more than a simple romance, however - it is also about little people battling against a soulless money-grabbing corporation which will ride roughshod over their lives and doesn’t see that home means more than bricks and mortar. Sarah becomes conflicted because she recognises very quickly that the village is full of real people with real stories, histories and an intensity of feeling. There is a genuine sense of community where people look out for each other. Up till now, from the comfort of a city office, Sarah has naively believed her bosses when they have told her that they are making lives better by buying up homes for a good price and giving people a chance to move on – whether they actually want to or not.

And finally, let’s hear it for the great crested newt, here to save the day – an ecological solution to a conundrum which sees the nearest thing to a villain get his comeuppance and the villagers happy once more. I’m not ashamed of giving away the ending. In this sort of story, the ending is inevitable, it’s how you get there which keeps the reader turning the pages.