The rock community reunited at the first full-scale Download Festival in three years, the crowds embraced one another and lost themselves in a celebration of everything which makes the culture so special. The festival is one of the friendliest I have been to and it always feels like being part of one big family.

With five stages it would be impossible to see all the bands appearing.


Benji Webb from Skindred
With the sun shining and a receptive audience Skindred took to the main stage on the first day of the festival delivering a performance that was a template in how to entertain an audience. Lead singer Benji Webb was in his element as he took control of the proceedings: his wit and charm were in evidence throughout. As the band sliced through Kill The Power they made you realize how much we have all missed live music.


Joel O'Keefe from Airbourne
Airbourne are often considered to be a poor man’s AC/DC - their style of music does owe a lot to the purveyors of rock. By the second song in lead singer Joel O’Keefe is already crowd surfing through the audience. “We’ve waited two years to be here” he informed the crowd. With tracks such as Girls in Black and Live It Up the band gave a performance that was tight, precise and entertaining.
{clear}

Frank Carter
Frank Carter and the Rattlesnakes brought the energy and attitude of punk to the festival. Carter was soon amongst the fans - as the band went through Take It to the Brink it have not been a more apt title to describe their set.
{clear} 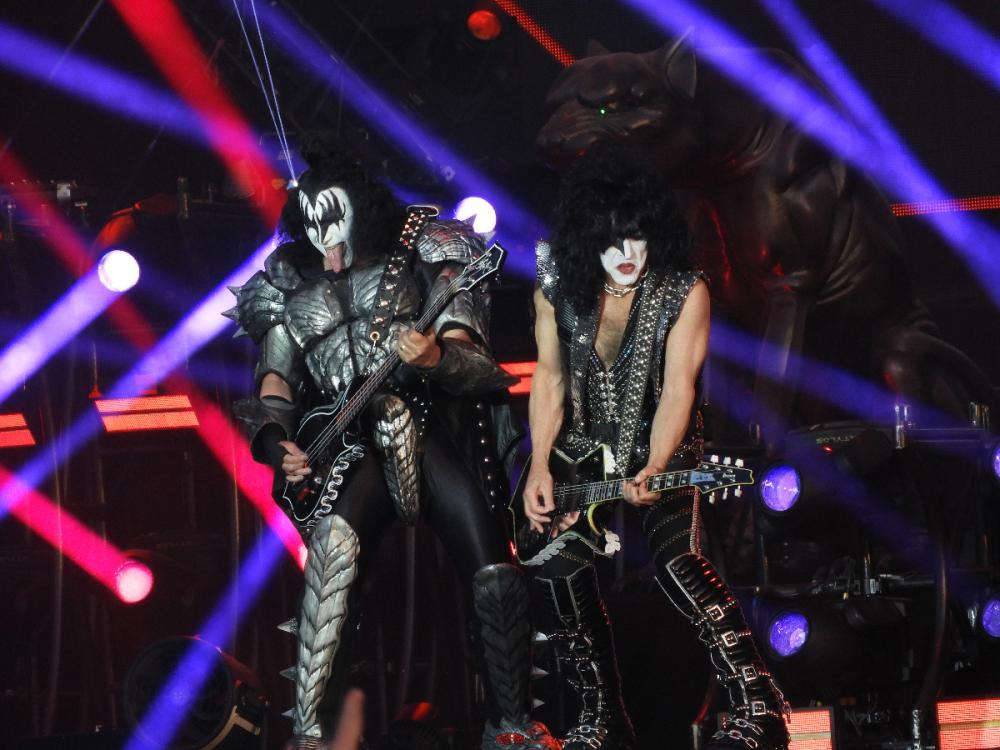 Kiss
If it is to be believed, the headline slot of the Friday evening from Kiss was to be their last ever appearance at the Download Festival as the act are currently on their end of the Road tour. Whilst the origins of heavy metal are based in the Midlands with acts such as Black Sabbath, it was American acts such as Kiss who added a touch of glamour with their make up and extravagant outfits. Their songs are just as much likely to be heard on Radio 2 as well as rock radio stations.

The band stole the show on Friday night when Paul Stanley flew above the crowd on a zipline suspended between the stage and sound tower during crowd favourites ‘Love Gun’ and ‘I Was Made For Loving You’. Their bombastic set was scattered with floating platforms and flying fake blood all while towering silver monuments of each member flagged either side of the stage. A truly over-the-top requiem for the New York legends. If this was a farewell then it was one to remember. 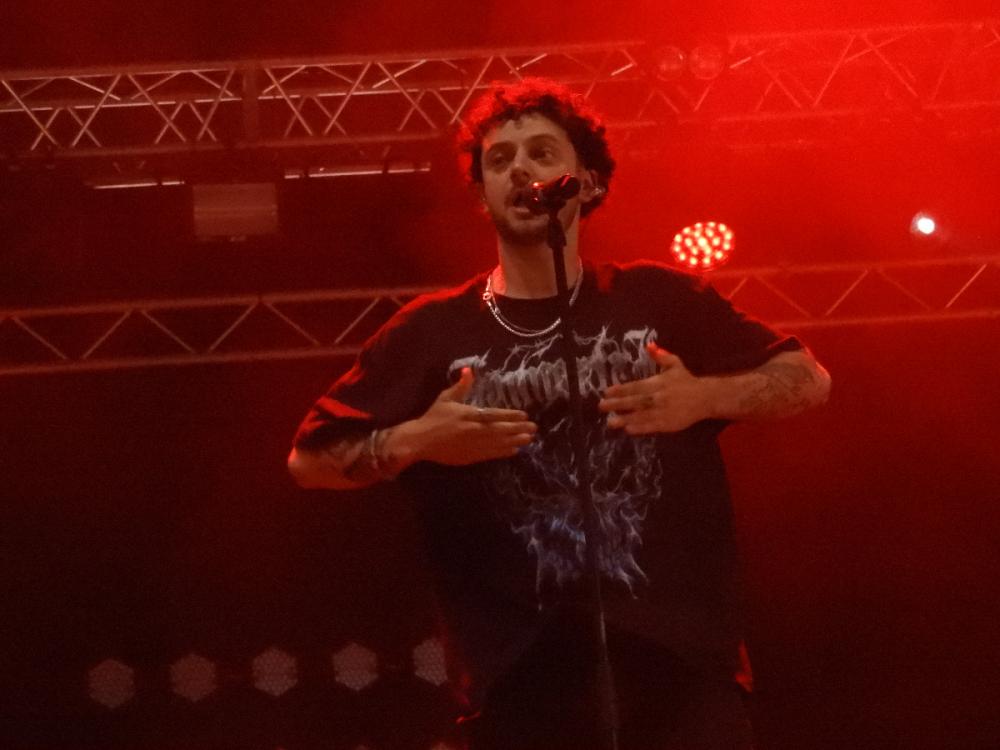 Grandson
American act Grandson came across as a mix of Twenty One Pilots meets Eminem, the Canadian singer has some good songs such as Rain and Dirty that appeared to gain many new fans in a set which was far too short.
{clear}
Black Label Society added a touch a gloom to their heavy set. Heart of Darkness and Bleed For Me might have sounded even better if it had been night time rather than on a sunny afternoon. 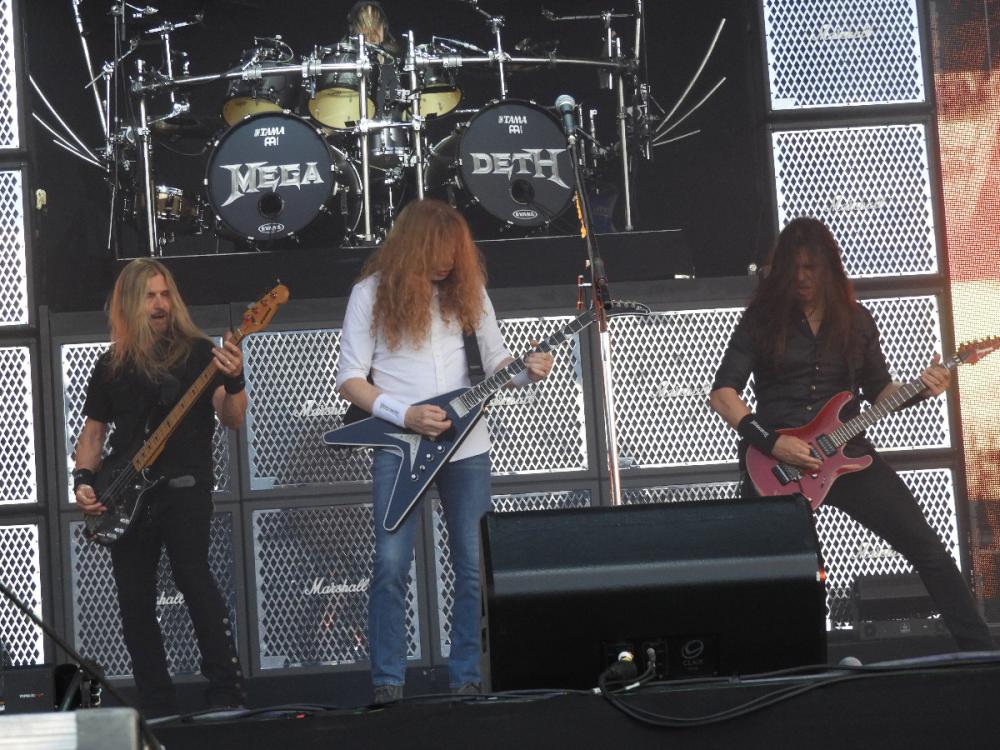 Megadeath
Megadeath weighed in with a set of old favourites including Symphony of Destruction and Peace Sells. The thrash metal group seemed as relevant as they did over twenty years ago.

Saturday night headliners Iron Maiden making their seventh appearance at Download made you proud to be British as the band delivered one of the best shows I have witnessed from the UK heavyweights.


Iron Maiden
Beginning with the title track off latest album Senjutsu, the stage began as a row of Japanese houses before unfolding into an opulent church, a crypt, and finally an airstrip with a Spitfire floating over the rock legends, framing their performance. Bruce Dickinson sparred with Samurai Eddie, (the band's mascot) wielding dual hand-held flamethrowers and donning a Top Hat for fan-favourite ‘Fear Of The Dark’, before drawing the night to an end with ambitious and anthemic ‘Aces High’.

When the band performed Blood Brothers it felt like you were indeed amongst one big family - the atmosphere in the audience was electric.


The Darkness
Sunday saw British rock royalty The Darkness perform a powerhouse set, filled with classic hits and Justin Hawkin’s trademark showmanship. Wearing a pink outfit that made you think Hawkins was on his way to a Country and Western festival the flames that rose when the band performed One Way Ticket were as hot as the band were. Only The Darkness could get away with playing Christmas Time (Don't Let the Bells End) on a summer evening as they concluded their all too short set.


Steel Panther
Comedy glam-metal icons Steel Panther showcased why they’ve earned legendary status amongst the Download audience. The American act made their début at Download in 2009, thirteen years later they headlined the second stage. Justin Hawkins from The Darkness was back on stage again to sing Party All day with them.

The main stage was then set for the return of headliners Biffy Clyro who began their rise through the Download ranks in 2004. 18 years later after chalking off slots on every stage at Download, they closed the biggest night in the rock festival calendar for with a blistering and euphoric set, proving once again why they are the very best in the game.


Highlights of this year’s Download Festival will be broadcast on SKY ARTS on 9th and 10th July at 9pm.

In 2023, Download Festival will return to celebrate its 20th anniversary and for the first time an extra day of music will be added to bring four massive days of live music and the biggest ever edition, from Thursday 8th June – Sunday, 11th June.

Limited Early Bird tickets are now on sale at this years’ prices from www.downloadfestival.co.uk.