Disco Fever Takes Over The Alhambra

John Kitching has been booging at Bradford's Alhambra

If you go down to Bradford Alhambra to see Saturday Night Fever this week you may want to make sure you pack your boogie shoes as the theatre is transformed into a 1970’s New York disco. Judging by the audience reaction on the opening night they would all like to be up on the dance floor strutting their moves. 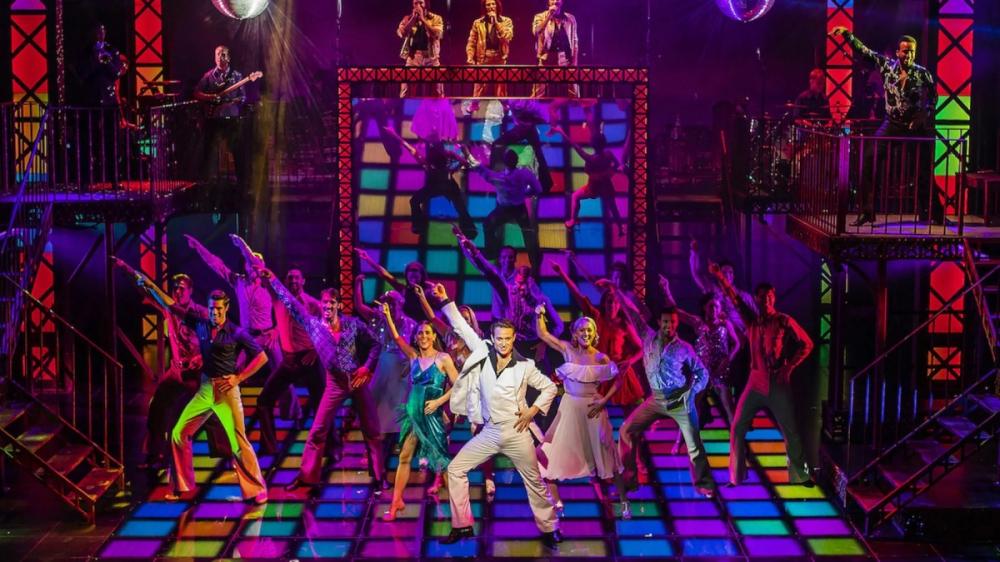 The cast recreating one of the many signature moves from the film
Based on the iconic 1977 film of the same name Saturday Night Fever follows the life of Tony Manero who escapes from the boredom of his job in a paint store and conflict with his family on the local disco dance floor. When a competition is announced his friends convince him to enter and he reluctantly teams up with Annette (Billy Hardy). But Annette has more than dancing on her mind, and he quickly drops her to team up with the enigmatic Stephanie. Stephanie wants nothing more than a dance relationship and Tony starts to question his morals. Their friendship grows as they practice their routines, but their chances are threatened when Tony gets involved in a local gang fight just before the contest.

The film is remembered for John Travolta’s strutting, swaggering performance as Tony, something that Jack Wilcox manages to capture perfectly. A performance full of animal magnetism as he prowls the stage earning numerous whoops and cheers as well as the occasional wolf whistle as he makes a swift change on stage and preens himself in the mirror. He rules the dance floor with dances full of anger and frustration, leading the company in the many routines with ease and confidence. A stunning leading man performance. 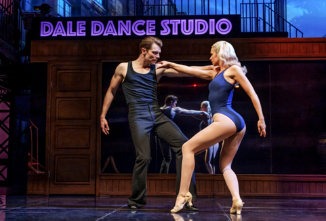 Tony (Jack Wilcox) and Stephanie (Rebekah Bryant) rehearsing for the dance competition
What really made the film a classic was the soundtrack full of distinctive songs written and performed by The Bee Gees, and with a stroke of brilliance the brothers are recreated on stage by an immensely talented trio (Drew Ferry, Oliver Thomson and AJ Franks) standing above the disco floor alongside a live band, looking just like the brothers and hitting all the right notes down (or should it be up) to the iconic falsetto ones.

The stage itself recreates the light up dancefloor reflected by an angled mirror which, along with disco balls scattering light across the auditorium, draws the audience deeper into the disco scene. It is the perfect stage for Tony and Stephanie to show off their acting and dancing capabilities.

Special mention to debutant Harry Goodson-Bevan who plays Tony’s friend Bobby C, his performance is mesmerising, culminating in his superb rendition of Tragedy someone to watch for in the future.
Whilst music and dance are the real draws, like the film, the show does contain strong language and grapples with a number of adult themes such as drugs, suicide, domestic abuse and sexual assault, it is well balanced with comedy and I am relieved to say it does not get as gritty as the original film.

A tremendous show and one that got the whole opening night audience on their feet and jiving as the show came to an end and I defy anyone not to do the same. Many were strutting away from the Alhambra a la Tony, including me.


Saturday Night Fever continues at The Alhambra until 12 November