Deep In The Shadowlands: The Damascene Moment By Malcolm Hollingdrake 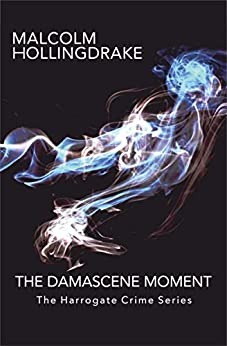 Living in Harrogate as I do, a number of people have mentioned the Harrogate Crime Series to me but as the books were only available on Kindle at first - not my preferred medium - I did not immediately enter the world of DCI Cyril Bennett and DI David Owen. Now regularly published in hard copy, I can sit and enjoy their investigations. This is the twelfth in the series and it seems Harrogate is as dangerous a place to live as Oxford and Midsomer.

Sadie Vance has gone missing and as the days pass, the team, led by Bennett, assume the worst. It appears the victim’s life is or perhaps was, not as innocent as first perceived: drug use and infidelity have played their part. When her friend, Jessica White, also goes missing, the forces of law and order suspect a more complex situation. A web of confusion is created and the detectives are baffled, despite, or perhaps because of, a growing amount of evidence. Which line do they follow? One thing becomes clear: if these girls have not simply taken themselves off on a jolly jaunt – which seems highly unlikely –the police are dealing with a clever, cold and disturbed individual, who covers his steps meticulously. There are few real clues and fewer leads worth following.


This is the twelfth in the series and it seems Harrogate is as dangerous a place to live as Oxford and Midsomer.
In the end, it is a tragic road accident which helps breaks the case, by revealing a body which had been left hidden in an inaccessible spot, trapped in a grotesque coffin. From there, the witness statements begin to make sense.

“The battle is on between light and darkness, the shadows and the Shadowlands”. Frequent references to penumbra and the shadowlands hint at the hidden nature of the villain who is concealed in the shadows yet likely to be living freely and openly amongst his – or her - peers. There is an intriguing Prologue and a disturbed child on the roof. What is the significance?

The narrative viewpoint changes regularly from that of the police officers to that of the criminal mind. The detail offered by that menacing individual is chilling to say the least. Hollingdrake goes to some lengths to explain what is done to the girls and there’s nothing sexual. The calculated treatment of their bodies is disturbing – our villain is clearly not only cunning but also deranged.


... I can vouch for the fact that one of the characters, at least, is thankfully nothing like his real self.
I appreciated the different perspective Hollingdrake offers; we rarely hear how a new father feels but the birth of his son has changed Owen’s outlook and his is a more emotional response to events. Despite the victims being young adults, and not always whiter than white in character, these girls are, to him, lost children, someone’s offspring, and he feels their disappearance deeply, empathising with their families in a way which is new to him.

Hollingdrake clearly knows Harrogate and he guides the reader around the town in such a way that you could follow his footsteps. It’s a quirky feature that some of the names are those of genuine inhabitants of the town although I can vouch for the fact that one of the characters, at least, is thankfully nothing like his real self. There are also literary allusions, in this case to Noyes’ The Highwayman and to the poetry of A.E. Housman and of course, to C.S. Lewis’ Shadowlands, adding further depth to Hollingdrake’s writing. The emphasis is on the team in this novel. It may be led by Cyril Bennett but he recognises - and Hollingdrake emphasises - the need for, and value of, real teamwork.

The Damascene Moment is published through Amazon.