Dancing And Ice At The Piece Hall This Christmas 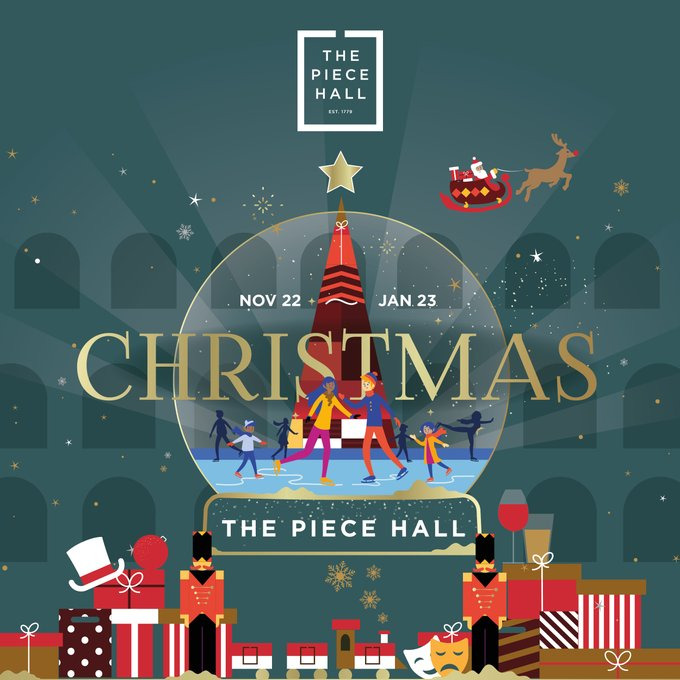 The Piece Hall has announced its spectacular festive programme for 2022, which is set to see the iconic heritage site transformed into a wintry wonderland.

Once again, the venue’s 66,000 sq ft courtyard will capture the spirit of Christmas and set the scene for a magical season with twinkling lights, a beautiful vintage carousel and the annual landmark Christmas tree. This year, an outdoor skating rink – a synthetic Glice rink which is more environmentally-friendly than traditional ice - is set to be the sparkling centrepiece from 1 - 31 December.

For those looking for a chance to dance, 80s legend and Spandau Ballet star Martin Kemp has been confirmed as a headliner and is just one of dozens of top acts who will be performing in the Spiegeltent. This magnificent wooden structure with a lavishly-decorated intimate performance space and dancefloor will play host to a full month of entertainment for all the family this festive season.

Martin Kemp will be taking to the decks for an uplifting set of iconic 80s classics to get everybody moving and singing along, from Duran Duran and George Michael to Chaka Khan and Michael Jackson. Other acts performing over the festive period include a debut from Radio 2 presenter and Garage don DJ Spooney; West End star and Britain’s Got Talent finalist Ben Hart; and on the back of their highly-acclaimed album “Dear Scott”, Michael Head & The Red Elastic Band.


Nicky Chance-Thompson DL, CEO of The Piece Hall Trust, said:
“We really want to share the magic this Christmas. The festive season is all about family, friends and coming together to make memories, and we’ve worked really hard to make sure our winter programme has something for everyone!

“There will be a full month of top-class shows in the Spiegeltent and an ice rink in the courtyard for the first time since the refurbishment. What’s more, our fabulous Markets are back and we’re bringing in our biggest tree yet! So whether you’re partying, shopping independently for gifts or just want to experience a great festive day out, The Piece Hall will definitely get you in the Christmas spirit.”

The build-up to Christmas also sees the return of the ever-popular Winter Makers Market for two festive shopping weekends. 50 local stalls will be full of gifts and goodies on Friday 11–Sunday 13 November and Friday 18–Sunday 20 November with different traders each weekend. Visitors can expect a bustling and cheery atmosphere as they sample the produce of pop-up food and drink stalls, alongside the chance to buy unique local artisan products and presents. Local acoustic musicians will also be providing an uplifting seasonal soundtrack.

Open every day, The Piece Hall’s resident independent traders continue to offer an unrivalled selection of gifts and have everything needed for underneath the tree. Shoppers can browse and buy everything from original art works to toys, books and games, unique keepsakes, stylish home wear and the finest current and vintage fashion, plus jewellery, crystals, handmade chocolates and sweet treats. And when they’re all shopped-out, visitors can snuggle-up with a mulled wine or hot chocolate at one of The Piece Hall’s fantastic resident bars and restaurants.

For those planning to embrace a handmade Christmas, there will be plenty of arts and crafts sessions to take part in during the season, including Jesmonite casting to learn how to make beautiful and unique gifts, as well as glass decorations and textile wreath workshops to adorn homes and share season’s greetings in the build up to the big day.

So, whether it’s festive family fun, a glide on the ice, gifts galore, DJs and dancing or sophisticated soirees with friends, The Piece Hall has Christmas all wrapped-up!

Tickets for all Christmas events and workshops are now on sale from the website https://www.thepiecehall.co.uk/