Crimson Soil: Only Killers And Thieves By Paul Howarth 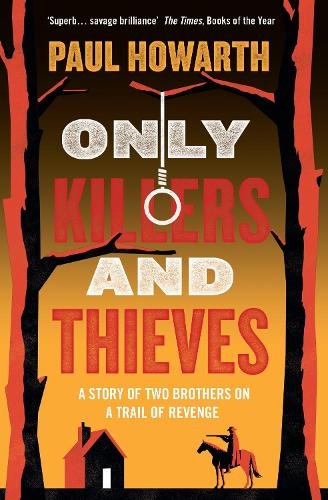 Sometimes a book comes my way which, under normal circumstances, I would not look at twice but which I am persuaded to read for other reasons. This is one such, the debut novel of Paul Howarth, and it is very different from my usual reading matter, falling as it does into the broad genre of the Western. It did not, however, disappoint.

Set in 1885, it is a brutal description of a brutal life and brings into sharp focus the harshness of an existence in the Queensland outback, especially when drought strikes. The McBride family struggle to scratch a living on their meagre plot of land; their cattle are dying and they pray for rain. Meanwhile, their neighbour, John Sullivan, seems to have a much easier time of it; his land is rich and fertile, his pantry full - in time, we discover why.

The novel is a bildungsroman, a coming-of-age narrative, which centres on a moral struggle, and Tommy is the real hero.
There is a history between Ned McBride and Sullivan but while the tension between the two men is palpable, the reason is unclear. Therein lies the fiction, but underpinning the novel is fact: the existence of the Queensland Native Police – a force which did exist and which was feared, for very good reason, by local tribesmen, wherever they might be found. There is harrowing detail of this darkest period of Australia’s history, when the indigenous Aborigines were hounded without pretext other than skin colour and a Victorian fear of Darwin’s newly published Theory of Evolution. It is a story which shows the cold-blooded policy of ‘dispersal’ towards the Aborigines in the 1880s which, in reality, was nothing short of genocide, hiding behind whatever excuse they could find.

Billy and Tommy McBride are brothers, aged sixteen and fourteen, and are very different in nature. They live with their mother, father and younger sister, playing their part as best they can to keep the farm going. When tragedy strikes, however, the boys ride out in search of justice, with John Sullivan, his deplorable sidekick, Raymond Locke, and a posse of Native Police, led by the sadistic Inspector Noone. The journey into the scrublands of the Australian outback is a harsh one and the boys are separated forever as a result of their differing responses to the hard moral choices they are forced to confront. It is certainly thought-provoking. Even the sandstorm, so vividly described, suggests that nature itself seems to be an ever-growing aggressor, yet another potentially deadly enemy.

Having found their prey, cruelty is unleashed. There is a nightmarish quality to the description of the slaughter of men, women and children as Noone, unflinchingly certain of his philosophy, inflicts ‘a peculiar kind of pain’. Afterwards, there is no celebration, just a calm acceptance of events - but no suggestion from Howarth either, that their actions were to be condoned.

Sullivan and Noone have their own reasons for their actions and the boys do not realise at first that they are being used. So-called civilised men behave like animals. Enjoyment is found in tormenting others, in murder and in rape - all undertaken without a second thought. Billy seems able to accept, even join in the antics; not so Tommy. The younger boy becomes the conscience of them all, offering the reader hope for mankind but suffering unbounded misery as he is forced to witness horror after horror. He is a complicated young man, tormented with mixed feelings: a strong desire for revenge but haunted with guilt over his actions towards innocent people. The novel is a bildungsroman, a coming-of-age narrative, which centres on a moral struggle, and Tommy is the real hero.

I was drawn, unresisting, into a brutal world and my eyes were opened to a history I had never associated with Australia – but would I want to go back?
Noone is well-read and softly-spoken but he is also a complicated character - captivating, despite his monstrous behaviour. Locke is just deeply unpleasant and the reader is suspicious of Sullivan, from the outset. There is more than a hint of menace in him; his generosity has an edge and he seems to regard his teenage wife more as a possession than a partner. There is a full range of characterisation across the protagonists who all contribute, no matter how large or small, their cameos to the narrative.

Although beautifully written in a fluid style, there is no humour in this novel, and not even a trace of Crocodile Dundee; instead, readers are taken into the hostile Australian outback, an alien setting and not only on account of its remote geography. The evil atrocities described are not simply gratuitous violence on the part of Howarth but contextualised and horribly credible.

I developed a morbid fascination for this book, drawn deeper and deeper into it despite the grotesque descriptions of the savage treatment inflicted by human on fellow human. The images are harrowing but give the novel a raw authenticity from which it is impossible to disengage.

We took my mum for a Chinese meal once. While she insisted at the time that she enjoyed it – and she did - she never asked to go back. So too with this book. I enjoyed it, very much, if enjoy is the right word. There are several intensely uncomfortable passages in its pages, but it is an education and there is no sugar-coating to the searing indictment of racism, and injustice. I was drawn, unresisting, into a brutal world and my eyes were opened to a history I had never associated with Australia – but would I want to go back? I am glad of the experience and what it has taught me. I have no need to re-read it but I am told the sequel is less brutal and worth perusal, so I shall grab a copy when I can.

Only Killers and Thieves is published by One Publishers