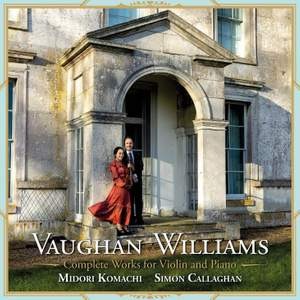 Midori Komachi has been one of the brightest of Japan’s many rising stars in the world of classical music since making her debut as a solo violinist at the age of 12 with the Zurich Chamber Orchestra. Based in London and Tokyo, she has performed extensively throughout Europe as well as in her native country. Her early status as a child virtuoso behind her and totally bilingual in English and Japanese, she is emerging as a scholarly figure, specialising in twentieth-century English music and bringing together two cultures

In 2017, her translation of Eric Fenby's recollections of Bradford-born Frederick Delius came out to great acclaim in her own country. Her translation of Simon Heffer's biography of Ralph Vaughan Williams (1872 – 1958) was timed to coincide with RVW2022, the 150th anniversary of his birth, the entire year marked with a series of concerts, recitals, lectures and documentaries. The p.ublished group of online newspapers has reviewed several of the many splendid albums to emerge.

Pianist Simon Callaghan performs internationally as a soloist and chamber musician. He first came to popular attention in 2017 with a recording of the concertos of Roger Sacheverell Coke for Hyperion’s highly acclaimed series, The Romantic Piano Concerto.

The year of course has had numerous Vaughan Williams’ highlights, including a groundbreaking biography from the pen of American musicologist Eric Saylor. Thoroughly researched, it brings profound insights into his early career, military service, relationships with the women he loved and married and friendship with Sir Adrian Boult. The Complete Symphonies, all nine, were issued on their own label by the Hallé Orchestra, under the baton of Sir Mark Elder. Albion Records, the recording label of the Ralph Vaughan Williams’ Society, was extremely active, as might be expected, and is to be congratulated for bringing out rarely heard works and giving world premières to forgotten pieces among a plethora of releases.

This, The Complete Works for Violin and Piano, emerged in June, on the MusiKaleido label, as one of the highlights of Midori’s personal RVW Project. Beginning with the Romance and Pastorale, a pair of bucolic miniatures composed in the innocent years leading up to World War I, it culminates in Six Studies in English Folk Song, spirited vignettes.

Between the two, we have the rarely performed Sonata in A minor, a late piece full of emotional turmoil, written for the Canadian-born violinist, Frederick Grinke, inspired by his interpretation of the Lark Ascending - which last forms the centrepiece, in its original version for violin and piano. This lesser-known form of the beloved work written against the backdrop of the First World War, has all the fragile delicacy of the bird on the wing. Completed after the composer’s life-changing experiences as a stretcher-bearer at the Front, it radiates hope for the redemption found in incomparable natural beauty. Dreamily rhapsodic, it is in striking contrast to the sonata’s variable mood, which plays enigmatically between the lyrical and the deeply troubled.

It is a programme which allows us to gently and almost unknowingly experience the full musical and stylistic development of the composer and appreciate something of his attempt at resolution of personal turmoil. The two soloists bring out the fragile beauty which bears Vaughan Williams’s signature. There is great beauty, vitality and immediacy in their playing, a bravura that is far from flamboyant but deeply sensitive, in tune with Vaughan Williams’s happy-sad sonorities - and gloriously free of cliché.

Not least among the magnificent production qualities - funded by the Vaughan Williams’ Charitable Trust, the Great Britain Sasakawa Foundation and The Nimbus Foundation - is the accompanying booklet, with photographs of the artists at Leith Hill Place, Vaughan Williams's childhood home now in the safe keeping of the National Trust. Midori’'s own extensive sleeve notes offer a unique perspective and understanding of her interpretation.

Throughout his long career as composer, conductor, editor, folksong collector and philanthropist, Vaughan Williams worked indefatigably to improve the standards and quality of British musical life. It is fitting that a hundred and fifty years after his birth, so many inspired by him should have laboured with so much love for him. Much love, reflection and refinement have clearly gone into this album.

RVW150 is now in the process of becoming a memory but the composer’s reputation and popularity are like his lark, ever on the wing.