Secular Requiem; Threnody for Jowan; A Sequence for Remembrance 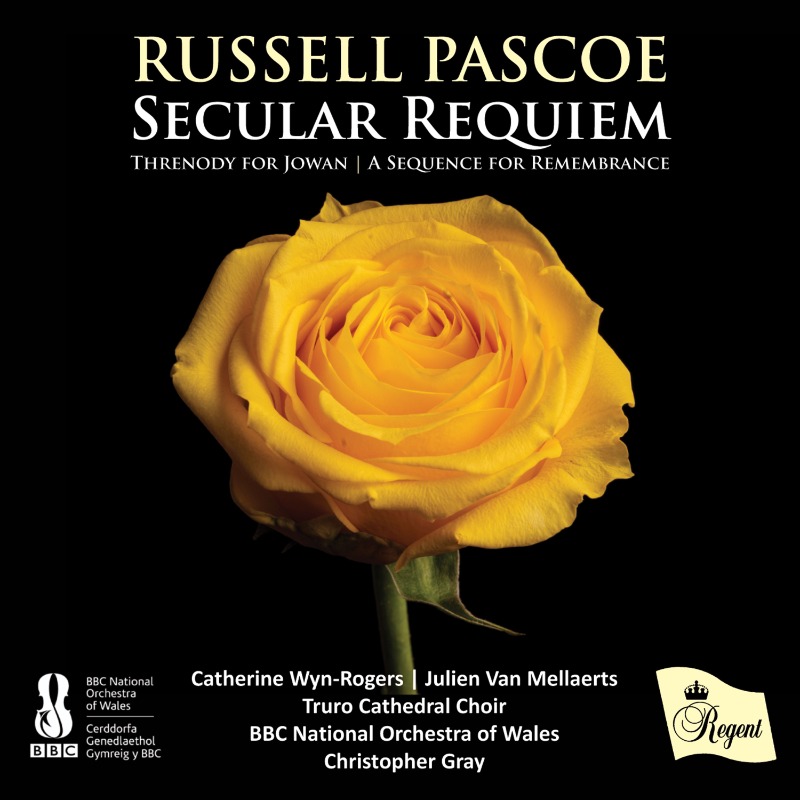 Described as the largest project ever undertaken by an English cathedral choir, the Choir of Truro Cathedral, under its director, Christopher Gray has joined with the full forces of the BBC National Orchestra of Wales to present the ﬁrst recording of Cornish composer, Russell Pascoe’s monumental Secular Requiem.

The presentation is excellent, superbly recorded by Regent, wonderful singing, and marvellous contributions in the accompanying booklet from Christopher Gray, Russell Pascoe, and a superb article by Jeremy Dibble.

Russell Pascoe writes: 'All my life I have been involved with choirs. Growing up, I sang in church choirs and the local choral society, and as a teacher I ran a plethora of diﬀerent choral groups. The vast majority of my music-making was to religious texts. It didn't really occur to me that, as a non-believer, there was a dichotomy; I felt no disconnect with the glorious, life-enhancing music, and I understood how the texts, often equally wonderful, had inspired it.

'In a society which is increasingly described as ‘secular’ I felt that serious ‘classical’ composers should try to connect with a wider audience, not simply those who were most likely to attend choral concerts because they are performed, out of necessity, in churches. I am very happy to set religious texts as I like to write thoughtful and hopefully profound music for communities that worship, but I believe that composers need to ﬁnd alternative texts for inspiration that reﬂect our current society and our diverse and ever-changing social and moral values.'

Certainly, there is a growing sense of secularism in society and in responding to this new wave, Pascoe has succeeded in what he set out to do.

Collaborating with Anthony Pinching, who has selected the non-religious and philosophical texts by many authors from John Donne and Thomas Moore to Dylan Thomas and Walt Whitman, plus his own text for the ﬁnal movement, Seasons, Pascoe has created an inspiring composition.

From the opening Pascoe demonstrates imaginative writing for voice and orchestra. The performance is arresting making clever use of orchestral colour. The use of bell-like notes at the beginning of No man is an island before the voices enter is wonderful. Pascoe uses percussion, brass, and strings effectively and there are moments of ethereal beauty amplifying the carefully chosen texts.

The BBC National Orchestra of Wales brilliantly capture the different moods. Julien Van Mellaert's baritone voice is perfect throughout, especially Thomas Moore’s poem The last rose of summer. Cathryn Wynn Rogers equally brings presence and fun in Stephen Anderton’s Cats and Cakes reminding us to put the cat out - once again tremendous orchestration. The piece ends on a note of hope with Pinching’s words

Full marks to Christopher Gray’s Truro Cathedral Choir who are on top form, demonstrating in the a capella sections like Threnody for Jowan, a short 4 minute work composed in response to the tragic death of the new-born child of a friend, with a text by the journalist, Richard Madden, the valuable contribution cathedral choirs make to the cultural fabric of this country and the importance of the English choral tradition.

The CD rounds off with A Sequence for Remembrance written in 2018 to mark 100 years since the end of the First World War with, once again, the libretto put together by Anthony Pinching, who really does have a knack for curating the texts. It is yet another superb Pascoe composition that alternates string interludes with a capella choir movements. The fine string playing complements the choral sections well. Pascoe’s take on the part of Binyon’s They shall grow not old resonates through its harmonic language.

The participating musicians, composer and Regent are to be congratulated on recording as significant a work as the Secular Requiem. It is worth exploring not just because of the marvellous pairing of music and texts but as an inspiring and beautiful work, full of hope.